The best comfort, at the lowest price – this is the motto, not always expressed as such, of those who pay for the construction of new residential spaces, office, commercial, logistics or industrial spaces. The construction sector is developing at an accelerated pace in the last years in Romania, both in new projects and in renovation and restoration projects, too. In parallel with this, the risks increase, and emergencies – such as fire, power failure, earthquake or, more recently, threats of bombings or even terrorist attacks – and the evacuation of residents are high rank challenges for the state institutions, but also for designers, users and producers of technology. Representatives from all these areas have participated at the March 8th edition of the Energy Breakfast Club – Practical aspects regarding safety in buildings – Exit and emergency lighting. 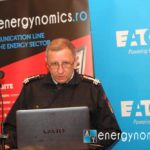 In front of a qualified audience, the guest speakers have talked about updating regulations in this area and how we can more aptly apply these regulations. On the one hand, from obligations put on paper, on approved projects, to the reality of the actual construction in the field, there is too often a distance that can translate anytime in property damage and loss of human life. On the other hand, the much too thick regulations and not adapted to the technological developments impede an effective control and discourage an extended conformation from the contructors. Finally, it requires a constant effort to educate the beneficiaries – mainly in the residential segment in relation to the essential role of safety regulations.

The role of exit and emergency lighting

The dialogue was opened by Colonel Dan Simionescu, Head of the Prevention Department within the General Inspectorate for Emergency Situations (IGSU) (under the Ministry of Internal Affairs), who informed us about the role IGSU and its subordinated units in the community and property protection.

We have a lot to do, noticed Dan Simionescu, who mentioned the situations that occurred recently when several areas in central Bucharest were confronted with a power outage, for a large period of time. “All the blocks from the Ion Mihalache Boulevard, as I could see myself, were in darkness. Looking on the streets, in a major intersection, where the traffic lights were not functioning, the cars were blocked. The trams stood in place, the public lighting was gone”. They were affected schools, with students still inside, hospitals and other public buildings where there were also many people. In such situations, the exit and emergency lighting proves its full usefulness and its crucial role in preventing serious incidents. “The exit and emergency lighting is necessary for users to quickly and easy identify the exit routes and also for their staff to quickly identify the location of the fire hydrants inside, and obviously for the intervention of the emergency personnel of the professional services, to identify doorways for intervention, movements inside the building and the location of means of defense against fire”, synthesized Dan Simionescu.

It is imperative to have a consistent, and steady (yearly) policy of updating regulations

In the immediate future, it is intended to amend the general rules for fire protection with clearer provisions on how to mark the exit routes in case of fire in public buildings, in order to improve visibility conditions for exit routes and the elements marking the route, announced the IGSU. The Inspectorate is open for applied discussions and cooperation with all who can contribute to a better adequacy of the legal framework in the field of activity of the institution, concluded Colonel Dan Simonescu. 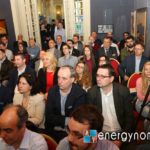 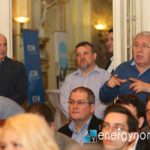 In this context, Professor Doctor Engineer Niculae Mira, Vice-Rector for Research and Development Activity at the Technical University Of Civil Engineering Bucharest, mentioned the fact that “in general, the regulations in Romania are not based on a well developed technical support”. “In the US, since 1890, the regulations on electrical installations are updated every two years”, said Mira. “In Romania, there are intervals from 7 to 10 years, even more, just because there isn’t a regulatory body in the field of norms”.

Present in the public, Cătălin Lungu, vice-dean of the Faculty of Installations Engineering and Vice President of AIIR Valahia Branch, along with Conf. Univ. Dr. Eng. Mihnea Sandu, expressed the readiness of the institutions they represent for providing the authorities with their expertise, as well as with newly formed specialized human resource in the field.

Eaton: Each emergency lighting luminary is important because it can save lives

Silviu Preda, sales manager at Eaton Electric, started from the specifics of safety lighting in a context of accelerated urban development, while the technology rapidly advances. Romania is the European country with the largest lentgh of accidental interruptions in power supply per capita in Europe, recalled Silviu Preda. Add to these situations other kind of emergencies, such as fire, earthquake, bomb or terrorist attack threats. To ensure the safe exit of persons, doorways should be properly illuminated, including by the installation of lights “along the access routes, at critical points, where, under a low lighting the risk of injury risk, of blockage or difficulty in using the fire equipment would increase”.

During his intervention, Silviu Preda also mentioned the mandatory periodical reviews of the lighting system (daily, monthly, yearly). For buildings with tens or hundreds of light sources, the luminoblocks with autotest and centralized monitoring are the most effective option, also from a financial point of view, if we take into consideration all the costs involved, on the total lifecycle of the lighting safety systems. Eaton’s representative presented the advantages of centralized power and monitoring systems as well as a complete portfolio of lighting, emergency signs and pathway lights.

“All these lighting equipments are assembled in Arad, where there is a production unit of Eaton that serves the entire European Union, in order for us to have a point of support and production for the European space,” said Silviu Preda.

Florin Enache architect is the coordinator of the working group of the Romanian Order of Architects for fire safety regulations. He insisted on the essential step in improving the living conditions and safety in residential buildings in Romania – educating the beneficiaries. A whole “folk” expresses the lack of precision, in fact – the lack of sound understanding of some key issues in the discussion about preventing fires in the residentiol spaces: manu words are used as synonyms, when they are not, the distinction between “flame retardant”, “non-combustible” and “fire resistant” is a fad language, including with decision makers in the field, while concepts such as ventilation / exhausting / smoke exhaust or insulation / thermal protection are rarely well understood. 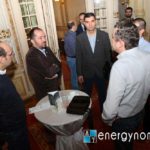 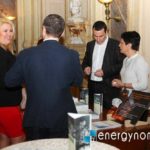 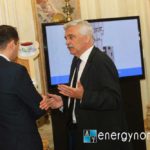 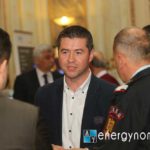 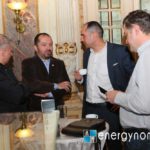 “Protecting against fire must be understood as an obligation of every member of society”, said Florin Enache. He has called for wider efforts to educate, especially the young people and even schoolchildren, through packages such as “Şcolari în siguranţă” or other types of campaigns such as the #better or de-a arhitectura initiatives.

The event was organised by energynomics.ro and supported by Eaton.

Access to Energy Breakfast Club is open to all professionals in the Romanian energy industry and related sectors, based on the call of energynomics.ro. You are welcomed to write us at office [at]energynomics.ro and ask for an invitation!
Energy Breakfast Club is a meeting of 2 to 3 hours where energy specialists have the opportunity to keep themselves up to date with the latest information and the most influential views on one the hot topics of the moment.
As a host, energynomics.ro will provide – from 09.00 AM – the MC and the coffee, will propose the theme and will launch the invitations for the speakers. They are selected accordingly with their best knowledge of the topic and are responsible for organizing ideas and stimulating intellectual challenges. Presentations will not exceed 20 minutes and are intended to be starting points for a dynamic exchange of ideas and perspectives.
The club closes at 13.
Download Premium WordPress Themes Free
Download WordPress Themes
Download Premium WordPress Themes Free
Download WordPress Themes Free
free online course
download xiomi firmware
Premium WordPress Themes Download
ZG93bmxvYWQgbHluZGEgY291cnNlIGZyZWU=
#better Cătălin Lungu Dan Simionescu Eaton Florin Enache IGSU Niculae Mira Silviu Preda
Share. Twitter Facebook Google+ Pinterest LinkedIn Tumblr Email