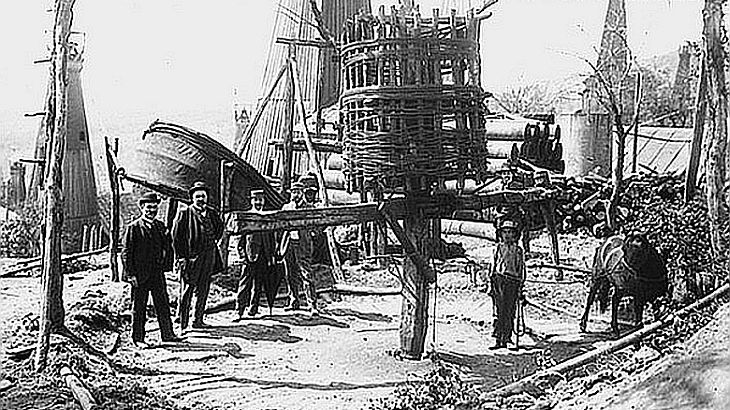 The hand-dug wells in Romania are highly interesting relics of a period which is now relegated to the past, though so long as the Romanian petroleum industry exists, so long will the old hand-dug wells be associated with it. First manually dug wells in Romania were made in the mid-19th century in the Păcureţi – Prahova, and the exploitation of oil wells was being done by hand wells with pulley and ‘’hecna’’ with horse.

This hand-dug oil wells were called ‘’puțuri cu tambre’’ because of the wooden use for strengthening. The depth of these wells typically reached up to 150 meters by hand digging a well with a diameter of about 1.5 meters and alternative crossing of layers of clay, sandy clay, sandstone and oil-bearing sand. For digging the wells was use a lot of manual labor. They use improved tools and methods as mirrors to illuminate the dark depths and some primitive ventilation systems. 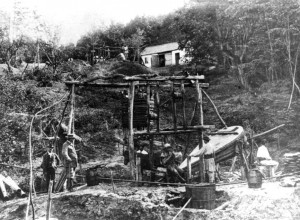 Workers were threatened with death every time because explosions and fires that could break while digging the wells. Working conditions were difficult because digging to great depths without protection, diggers were threatened with blindness because the gas emanation or asphyxiation. Usually working during the winter when, due to lower temperatures, gas emanations were less intense. Work for oil extraction was difficult, was made with great risk, demanding calm, will, courage and a long apprenticeship.

Lighting in the first phase was achieved through a system of mirrors and an advanced miner’s lamps were used. In case of gas infiltration those lamps stopped flickering and so it had the advantage of preventing any explosion. To ventilate the shaft in the beginning were used forging swell and, much later, primitive pumps. Descending into the well was made with the help of a bucket that was also used to evacuate the detritus resulted from excavations. This bucket connected to a rope was operated by a pulley or by a mule.

Because of the stifling heat that increased in the depth, workers descended into the well dressed summary with the minimum of clothing, usually saturated with oil, and they wore a heavy and uncomfortable metal hat on their head, a precursor to future helmets, to protect the head from falling stones.

Walls of the dug well were lined with impermeable clay and wicker against water infiltration. Wood was used as raw material in strengthening wells by using special hence . When the source of oil was reached, the extraction began. In case of an oil eruption, a bell was used for capturing the oil and this was channeled into wooden gutters and ditches to form an oil lake so-called ‘’batal’’. As a result of using this method, the reservoir energy was depleted.

After stopping the eruption they continue bailing extraction oil being pull-out using large buckets. When a bucket of oil was extracted another one was lowered into the well – two buckets running on a pulley being operated by a mule as it moves in a circle around the well. With these primitive methods there could be extracted up to 10 tons of oil per day. The deepest wells dug by such means were in Breaza (320m) and at Popeşti – Urlaţi.

Marius Furcuța is a Petroleum Engineer for OMV Petrom, and graduated in 1998 from the University of Oil and Gas in Ploiești. He is passionate about the history of romanian petroleum, and publishes articles and unique images on Petroblog.