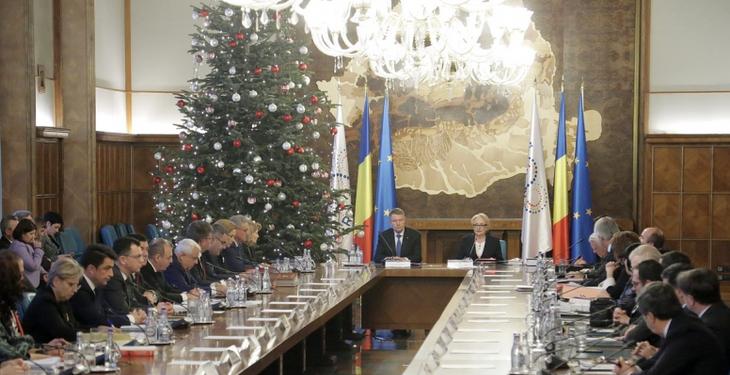 In spite all the critical public evaluations in the past 48 hours, PSD President Liviu Dragnea announced that the emergency government ordinance (GEO) introducing massive tax increases will be adopted in the Government meeting scheduled for today, starting at 18.30. “There was a need for some adjustments to the wording, but the provisions remain the same,” Dragnea said. However, near 12.00, the draft of the GEO was not on the agenda of the Government meeting today!

Adoption of the GEO in today’s meeting would violate Law 52 of 2003, which states in paragraph 4 of Article 7 that

and in paragraph 8, it explains the pathway for draft normative acts:

(8) The draft normative act shall be submitted for analysis and approval to the public authorities concerned only after finalization, on the basis of the observations and proposals formulated according to par. (4).

Article 115 of the Romanian Constitution explains in paragraph 4 the regime of Emergency Ordinance:

4) The Government can only adopt emergency ordinances in extraordinary situations whose regulation cannot be postponed, with the obligation to motivate the urgency within the text.

In the draft GEO on the amendment of the fiscal framework published on the website of the Ministry of Finance, there are eight pages of arguments put forward, referring to the most diverse issues: ROBOR interest rate evolution, wage law, construction agreement, car tax, livestock farms, waste, cigarettes, public procurement, the Romania-France Season, the status of civil servants, holiday tickets and food allowances, aid to the Republic of Moldova, etc.

The only emergency that would have any connection with the energy industry is the need to adopt the state budget law as soon as possible, while respecting the deficit target of less than 3% of gross domestic product, as provided by the Treaty on the Functioning of the European Union. Simply put, the over-taxation of the energy sector is meant to support budgetary spending committed for the coming years. Is this really an emergency in the sense of the Constitution? Is over-taxation the only way to balance the budget? Is over-taxation of energy the best way to balance the budget?

Ironically, or even cynically, the GEO project refers to the Fiscal-Budgetary Responsibility Act no. 69/2010, introducing

The draft GEO on new taxes has received a negative opinion in the Economic and Social Council (ESC). One of the first observations raised by a trade union representative was the clutter of topics and areas affected by the ordinance. “Why not put them apart? Do not address 7 fields in one Ordinance! Make one for construction, one for wages etc!”, writes hotnews.ro.

Silvia Vlăsceanu, Executive Director at ACUE – Employers Federation of Energy Utilities Associations, claimed the need to postpone a decision within the ESC, because the minimum public consultation deadline was not observed and there was no debate in the Ministerial Dialogue Committees.

The GEO substantiation note does not identify any socio-economic impacts (in Section 3), nor on the business environment, either at the social or macroeconomic level, although it estimates a financial impact on the budget of 4.09 billion of lei (in Section 4); (it is not specified on what time frame!). In Section 5, the authors consider that the GEO does not amend or repeal previous normative acts, although, for example, Article 77 of the GEO project provides:

Article 77 – Government Emergency Ordinance no. 33/2007 on the organization and functioning of the National Regulatory Authority for Energy, published in the Official Gazette of Romania, Part I, no. 337 of 18 May 2007, approved with amendments and completions by Law no. 160/2012, are amended and completed as follows: …

Beyond the rejection of the opportunity and the warning on the anticipated impact of the measures included in the GEO, the legal technique and practice are obviously violated in the name of a rationally difficult to support ‚emergency’. Many measures will not be stand against constitutionality, impact on competition and European directives compliance checks. Adopting them urgently is damaging, as has already been shown after their simple announcement, in the manner it was conducted.