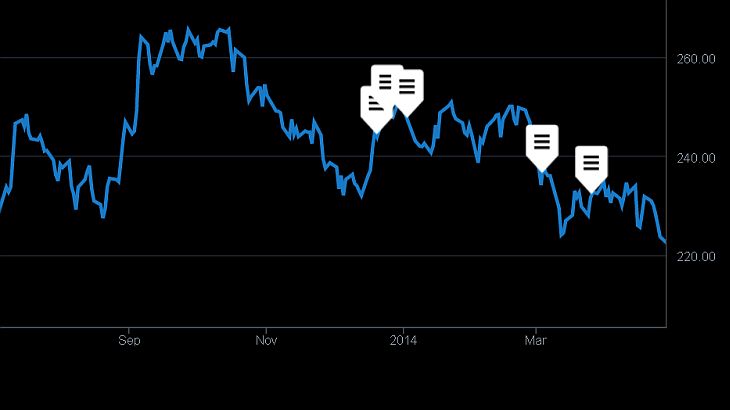 The shares lost 1.7 percent to 219.80 rubles by the close in the Russian capital, declining for a sixth day to the lowest since June 19. Rosneft’s global depositary receipts slumped 1.8 percent in London to the weakest level since September 2012. The company was among six government-related entities whose ratings were cut to BBB- by Standard & Poor’s, the lowest investment grade, after the shares stopped trading.

It was the sixth day of declining for Rosneft shares

“It’s pretty unpleasant when the CEO of the biggest oil companies is placed on such a list,” Alexei Kokin, an analyst at UralSib Financial Corp., said to Bloomberg, by phone. “It’s really important to find out whether the company itself will be sanctioned in the future.”

The Obama administration imposed penalties on Sechin and six other Russian officials, as well as 17 companies linked to Russian President Vladimir Putin’s inner circle in the banking, energy and infrastructure industries. The sanctions are being imposed in conjunction with the European Union, which added 15 names to its list on Monday.

In another report, Bloomber also announced that Statoil ASA has delayed a drilling campaign with OAO Rosneft. The two companies, which signed an agreement in 2012 to explore offshore and onshore blocks, postponed the start of a pilot project on a heavy-oil discovery in North Komsomolskoye in West Siberia to next year from this summer, said Knut Rostad, a spokesman for the state-controlled Norwegian company. While the decision was made “recently,” it was due to operational factors only and isn’t related to the tension over Ukraine, he said.

“Among other things, winter roads have made it impossible to bring in rigs like we had hoped”, he explained.

Lars Christian Bacher, the company’s head of international development and production said in an interview with Reuters as late as April 14 that the first of three wells would be drilled this year.