Rompetrol invests 4.2 mln. USD in the modernization of the Vega Ploieşti refinery 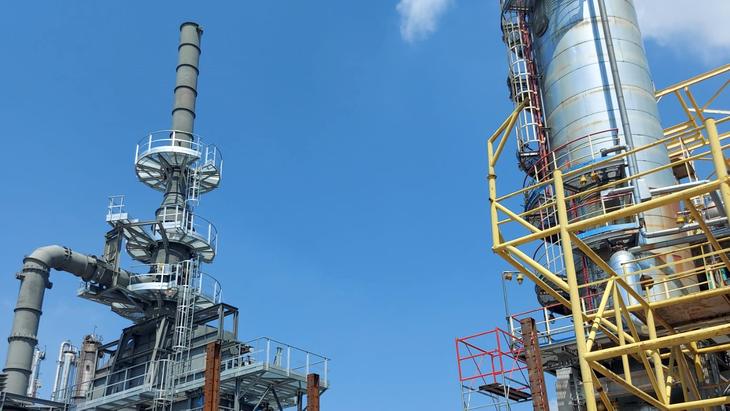 Rompetrol Rafinare, a member company of the KMG International Group (Rompetrol), has completed a 4.2 million USD investment in the modernization of the Vacuum Distillation (DV) Plant at the Vega Ploieşti refinery, according to a release.

The project will help to improve operational processes and will also have a positive impact in terms of increasing the protection of the environment.

„The modernization project aimed at improving the production yields from the DV Installation, where the fuel oil supplied from the Petromidia Năvodari refinery is processed as raw material and used in the Ploiești unit for obtaining asphalt mass and other derived products. The modernization of the plant will strengthen the strategic position of the Vega refinery, the only profile unit in the country capable of producing road and special bitumen, products used in infrastructure works in Romania and the region. Through such investments, the company is in line with the general objectives of the Group, for the development of production activities, at the highest standards of performance and safety”, said Felix Crudu Tesloveanu, General Manager of Rompetrol Rafinare.

The significant stages of the project consisted in the design, execution, transport and installation of the new technological furnace, which has the role of heating the raw material and fractionating it under low pressure conditions.

Compared to the old equipment, the new technological furnace has an efficiency between 86% and 90%, compared to about 60%, as it was until now. Also, through this investment, the consumption of utilities will be reduced, by using burners with increased efficiency, but also a combustion air preheater.

The technological furnace recently introduced in the operational flow was produced by an Italian company specialized in the construction of equipment for refineries, has a normal working flow of 30 tons of fuel oil per hour and can achieve an energy efficiency of 95%.

At the same time, with the implementation of the project in the Vega refinery, the operation of the DV Unit will be supported at increasing operational parameters, but with the decrease of CO2 emissions, as well as the reduction of maintenance costs.

In 2022, Rompetrol Rafinare planned a production of approximately 140 thousand tons of bitumen, with about 20 thousand tons above the level reached in 2019, the year in which the largest amount of bitumen was obtained, so far.