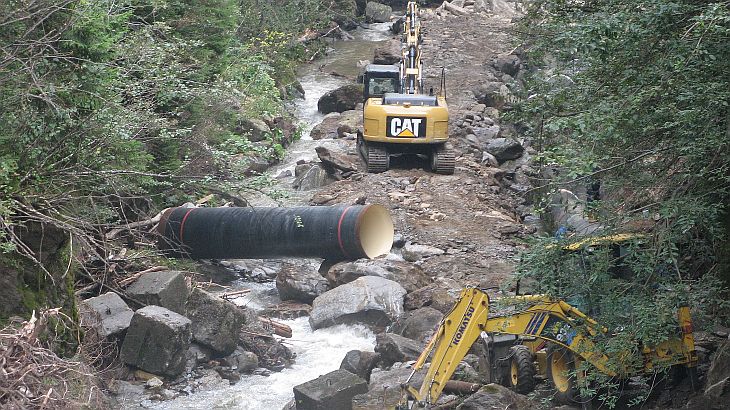 Green tariffs are driving development in the Southern Carpathian mountains, but with ecological and legal consequences

More than 500 ‘micro’ hydropower plants are operating or are in various stages of construction and planning in the largely protected Southern Carpathian mountains, writes the theguardian.com.

Deep into the wilderness of Romania‘s Southern Carpathian mountains, Bogdan Binescu, an avid angler and environmental campaigner, stops by the white waters of a mountain stream. “This river used to be the only route back to civilisation,” he says. “But now civilisation has caught up.”

A few kilometres on, his meaning becomes clear. Where beech trees had previously risen from the banks of the River Capra, a grey concrete building sits on muddied earth, housing the turbines of a small hydropower plant. Beyond, the river has all but disappeared, its bed of shattered rock and compacted earth now exposed. Between 80 and 90% of the river now flows through a thick metal pipe, carried here from a dam five kilometres upstream.

This is one of more than 500 “micro” hydropower plants operating or in various stages of construction and planning in the largely protected mountains. Together, they will produce less than 4% of the country’s energy.

Often subsidised by European funds and with profits boosted by up to 500% from green tariffs – a subsidy drawn from a tax on energy consumers – micro hydropower has quickly become a favoured form of investment.

As profits are highest where the rivers run fast, investors are drawn deep into the mountains, in many cases to state-owned nature parks, protected under EU and domestic law. Binescu says: “Many of these projects are illegal on so many levels that only the powerful and well-connected have access to them.” It is this, as much as the ecological impact of the power plants, which has drawn public protests throughout the Carpathians over the last year, in Ukraine, Romania and Bulgaria.

Here in the Southern Carpathians, the power plant to which Binescu has taken us is one of 10 recently constructed by the retail company Imob Expert Consulting, owned by the self-declared “two top businessmen” in the county, one of whom, Gheorghe Badea, recently ran in the local elections. In partnership with them is the fiancée of the daughter of the Romanian president, Radu Pricop, a lawyer and local MP whose private law firm carried out all the legal operations involved in the investment.

Funded with €2m of European rural development funds, the investment will see a return of €1.2m a year. Of this, €1m will come directly from government-issued green tariffs, guaranteed annually for at least the next 13 years.

Without the political connections of the investors, opponents say, the project would be impossible. Spread across three rivers, the power plants all lie within an European protected Natura 2000 site and on state-owned land. Environmental regulations deem the project unlawful on three counts, it is claimed, while to rent the land from the state would cost, at rates set by the National Forestry Department, around €1m a year.

Yet the company engineered a straight land swap with the state, exchanging the 24,000 square feet of mountain land necessary for the power plants for a similar-sized area of arable land it owned. It drew up its own environmental impact assessments, critics say. When construction began, video footage allegedly recorded violations of environmental law on multiple counts.

At first, the Romanian government agency, the National Guard for the Environment, urged action, declaring the project and environmental forms “absolutely illegal”. Two days later, officials had changed their minds and refused to “talk any more about it.” The European commission, however, is set to visit the site next month to assess its legality.

Badea told the Guardiant: “The projects have been made with all the necessary approvals, authorisations and they function like all the other projects for micro hydropower plants in Europe. But there are some sick people who don’t have anything to do, so they invent things about these projects.”

Over the last few months the opposition to micro hydropower in the region has grown. Backed by a petition signed by 20,000 Romanians, WWF Romania and the International Commission for the Protection of the Danube River have drawn up a protocol to create areas protected from hydropower development.

However, government support for the industry is strong and Diana Popa, a policy officer with WWF who worked on the protocol, sees a tough fight ahead. A state report has identified 4,000 locations to be potentially exploited for hydropower. Meanwhile, president Traian Băsescu recently blocked a well-supported government proposal to reduce green tariffs for micro hydropower by 24%.

“The political connections in this industry are everywhere,” says Popa. “Because of the green tariff scheme, many politicians have big interests in hydropower. They think they can get away with what they want as it comes under the ‘green category’.”

Attila Andras Nagy, a freshwater marine biologist with the Romanian wildlife protection organisation Milvus, explains. “We are talking about the loss of thousands of kilometres of river. Tens of thousands across the whole mountains range. The habitat fragmentation this creates severely affects the populations of countless fish species, many of them protected. Then consider the animals that feed from the water – the otters, European dipper birds and more. The impact is cumulative and ends far from the rivers.”

(Bogdan Binescu’s name has been changed at his request.)