Acasă » Oil&Gas » Consumers » RCE: Traded volumes increased as a result of the liberalization of the natural gas market

RCE: Traded volumes increased as a result of the liberalization of the natural gas market 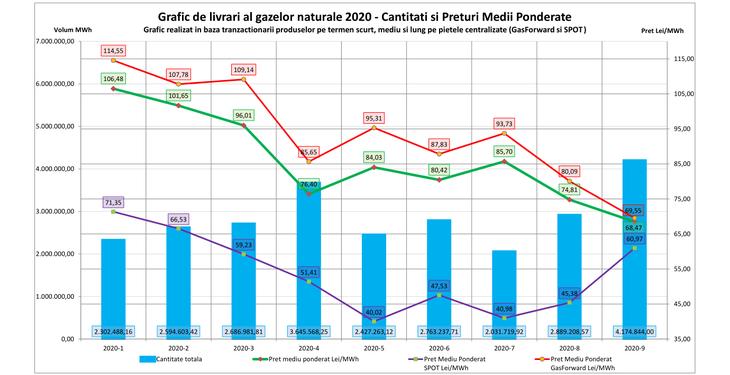 The relevant synthetic data for the first 9 months of 2020 confirm the upward trend of the natural gas market, as the representatives of the Romanian Commodity Exchange (RCE) have anticipated that it would happen with the elimination of the “unfortunate provisions of the well-known GEO 114”. In the third quarter, the positive developments focused on both the two main indicators: the quantities traded and the resulting prices.

The graphs and tables with the evolutions of the two indicators throughout the year indicate “a trend of return to normal already starting with the second quarter, with the announcement of the cancellation of the constraints of the above mentioned ordinance, followed by a sharp acceleration of favorable developments in the third quarter, as it was free of any regulatory impositions”, RCE states in a press release.

The volume of transactions concluded on RCE’s spot and forward platforms at the end of September exceeded 36 TWh, with the volume of the third quarter far exceeding the total volumes of the first two quarters of the year. The main cause is the liberalization of markets, the possibility of trading at real prices, resulting from the meeting of demand and supply, which has increased interest in stock exchange operations.

A novelty of this period was the introduction of the GRP regime (“gas release program”), a commendable measure in itself but, in the opinion of RCE, only a first step towards the normal stock market regime, that of market maker (“market maker”). However, the new regime, from the point of view of imposing the traded volumes, is less burdensome than the previous one, the trading obligations for the market participants being replaced with the bidding obligations, and they materialize extremely rarely in actual transactions. “These things justify us to say that the positive dynamics of traded volumes is due to liberalization and increasing market maturity, starring the main players, and especially producers, and the demonstration of this statement is given by traded volumes, much higher than required under the GRP regime”, states RCE.

The weighted average prices for the quantities delivered in this interval experienced a sharp decrease, from over 105 lei / MWh at the beginning of the year, to 65-68 lei / MWh at the level of September. Among the relevant factors that led to this situation are the effects of the pandemic and the reduction of prices worldwide. In the opinion of RCE, “the evolution throughout the year shows us that the real reasons are completely different. Globally, summer was the period with the lowest prices, until the beginning of August; starting with September the prices increased by over 50%. At the same time, prices on the local market began to fall during the summer, but continued in September, contrary to international trends. At the same time, the spread between the prices of the Central European stock exchange CEGH and those registered on the RCE started to decrease, and starting with September the situation even reversed: the natural gas bought on the local market is cheaper than the Central European one.”

In the opinion of RCE, “the adverse effects of GEO 114, amplified by the rigid and excessive way ANRE chose to apply the law, led to increases in local market prices by more than 50% compared to European ones, and long-term contracts concluded in that period needed some time to consume their influences. Throughout the existence of the ordinance, the burden of high, distorted prices has been borne by the final consumers in the industrial field.”

All consumers lost because of the GEO 114

However, if we follow the evolution of spot market prices, it is visible that in February-June, between the weighted average prices of forward contracts and those on the spot market there is a spread of 50-100%. The spot market, the one that gives the measure of the real value at the moment, which is half compared to the futures one, was an anomaly that should have made the authorities re-think, says RCE. “Moreover, the price of 68 lei / MWh, calculated by ANRE as providing protection for final consumers, mainly domestic ones, proved to be much higher than the market price for a long time. The so-called protection of domestic final consumers has in fact become an obligation for them to buy natural gas at higher prices than the real market could offer! Given that both categories of consumers were practically disadvantaged, it is interesting to find out who had to gain in the opinion of the authorities,”, conclude the experts from RCE.

Another feature had effects throughout the year – the increase in imports, driven by much lower European market prices, compared to the domestic prices. However, the influence of these imports on the market was a positive one, as it tempered the explosive increases on a totally disturbed market, prices that exceeded 120-125 lei / MWh for some times. Today, by reducing prices, this trend is reversed and the first exported quantities have started to appear, it is true, at very low volumes.

In conclusion, the RCE experts are optimistic in a normal and correct evolution of the natural gas market, taking into account “this increase of the volumes traded on the stock exchange, simultaneously with a significant reduction of prices and having them below or at maximum near the level of other European markets.” The fundamental condition is that the authorities limit their interventions on the markets and allow them to evolve freely, in conditions of competition and transparency. “It is obvious that no one will be held responsible for the consequences of such interventions, but at least the unfortunate experience must be understood and not repeated. We must also avoid apocalyptic forecasts of price explosions in markets left free to function and unregulated, as such forecasts were categorically contradicted by current developments and by those of the period 2017-2018.”