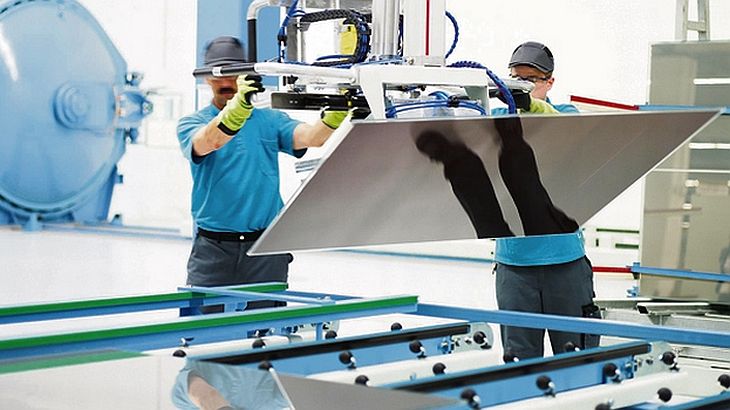 PV module prices also fell during the last three years. According to the research mentioned, in 2011 module revenues reach 47.5 billion dollars, the historic high, after which followed the huge market contraction. Now, PV module prices are less than half of what they were three years ago. GTM Research’s base-case module revenue forecast for 2014 is $35.7 billion, with an additional upside of $10 billion, still less that the 2011 peak.

From a geographical standpoint, the report shows that “China and Japan, the two largest end markets for solar installations in 2013, were also the two largest module sales markets, combining for $15 billion in revenue. However, while China installed almost twice as many megawatts as Japan, actual revenue from sales to China was only a third higher.”

The difference comes from prices. The GTM researchers presented evidence that PV module pricing in Japan in 2013 was 43% higher than in China on average due to „higher incentive levels, a preference for higher-efficiency modules, and the dominance of higher-priced domestic brands in Japan.”

Previously research from GTM shows that „Japan is currently the highest-priced PV module market in the world, with Japanese brands selling for over a dollar per watt even today. Conversely, significant volumes of modules were sold into China for less than 60 cents/W in 2013.”

For 2014, prognosis might lead us to think that things will reduce the spread between these two large markets. “Prices in Japan could see some compression as lower-cost foreign suppliers increase their market share and feed-in tariffs potentially step down in April, a new feed-in tariff in China and a tight silicon supply environment for domestic modules is likely to bolster pricing there.”, says the paper by GTM Research.

The largest world-market, the USA, might see some significant developments too regarding price trends. GTM projections suggest that the prices for Chinese imported PV modules will reach more than 75 cents/W this year due to three big factors:  „further upstream price increases  for silicon, wafers and Taiwanese cells, a tight supply environment expected through the year, and the possible imposition of  additional tariffs on imports of Chinese or Taiwanese components.”