Priorities of the Energy Ministry for the second semester of 2018 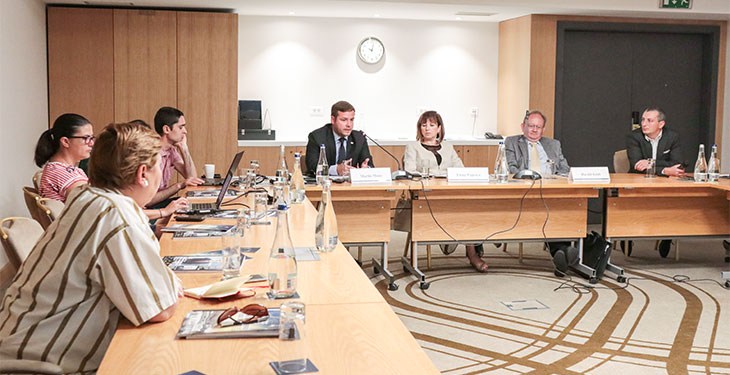 The Ministry of Energy has six intense months ahead, while it works intensively on at least nine fronts, each with strict deadlines before the end of this year. The National Integrated Energy and Climate Change Plan – PNIESC is the document in which all the dominant themes of the Romanian energy sector meet, and it must be submitted to the European Commission before December 31st, Elena Popescu, general director in the ministry, told at the press conference in which energynomics.ro released the official report after the 2018 Energy Strategy Summit.

Harald Kraft, President of ROPEPCA and Martin Moise, Vice President of PATRES, were also among the speakers at the event, alongside journalists from Focus Energetic, Adevărul, Radio România Actualităţi, Mediafax.

In his intervention, Harald Kraft (ROPEPCA) insisted on the need for a stable fiscal and regulatory framework for the development of energy projects in the oil and gas sector. He also appreciated that it is appropriate for the onshore and offshore sectors to enjoy similar treatment for a strong development of the national gas market, in the benefit of the Romanian economy and society.

Kraft (ROPEPCA): Romania should encourage investment in the manufacturing industry in order to use its natural gas

For his part, Martin Moise welcomed the changes introduced to the implementation of the Renewable Support Scheme by the Law adopted this June in Parliament, to be promulgated, provided that the new legal provisions remain in force throughout the lifespan of the scheme. The renewable sector can play a key role in meeting the new agreed targets at European level, Martin Moise also said.

Moise, Patres: The way in which energy is traded will undergo great mutations

energynomics.ro, the most complex communication platform for the Romanian energy industry, launched the official 2018 Energy Strategy Summit, held on June 6-7, in Sinaia. The debates focused on the hot topics of the moment, and add to those held in 2015, 2016 and 2017.

“When we launched the Energy Strategy Summit concept in 2015, the national energy strategy was the dominant theme. With the advancements in this draft, the 2016-2017 editions brought to the forefront the strategies of large (multinational) companies as engines of change in the energy industry. The big gain of this year’s edition is that we identified the micro-strategies – of consumers – as a basis for future evolution in the energy industry”, said Gabriel Avăcăriţei, chief editor of energynomics.ro.

The 2018 Energy Strategy Summit report can be consulted in the Romanian version as well as in the English version. The document will be sent to public authorities for them to take it into account in future decisions.

previousFrom 2019, gasoline should contain at least 8% biofuel
nextRompetrol encourages the use of electronic billing