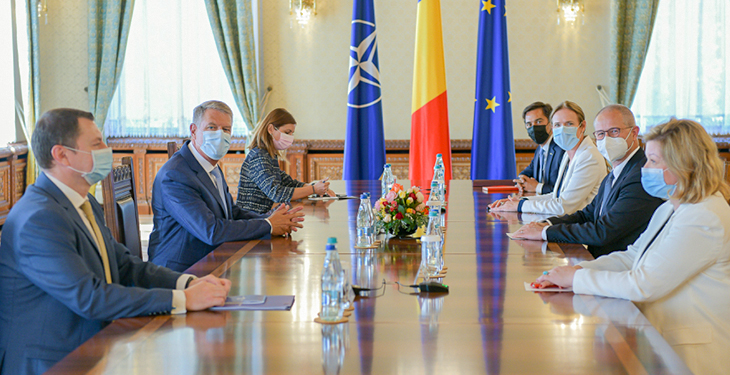 The President of Romania, Klaus Iohannis, received on Thursday, September 16, 2021, at the Cotroceni Palace, the OMV Group delegation, led by Alfred Stern, the new CEO of OMV Group, is shown in a release of the Presidency.

“On the occasion of the meeting, the management of OMV Group presented the development strategy of the company in Romania for the next period, but also the results of the current activity, respectively social responsibility initiatives. OMV Group has expressed its commitments to remain a long-term reliable partner for the Romanian state “, it is also shown in the release.

Discussions revolved around the challenges and opportunities generated by the energy transition process. One of the important topics of the meeting was the strong increase in natural gas and electricity prices, a worrying issue given that Romania is a major producer of natural gas in the region.

In the current context, the President of Romania underlined the decisive role that natural gas and the exploitation of Black Sea fields play in the transition to green energy, in accordance with the European Ecological Pact and the horizon of the European package Fit for 55.

The Black Sea region is and must remain a pole of regional stability and a strategic perimeter for national security. Romania has a real potential in the field of natural gas production, the capitalization of which can and must ensure energy independence.

“President Klaus Iohannis declared his support for the partnership between OMV Petrom and the National Company Romgaz in the offshore project Neptun Deep, essential both for the supply of secure energy and for achieving the objectives regarding the energy transition. The completion of the negotiations between the American company ExxonMobil and the National Company Romgaz creates encouraging premises for the involvement of the national producer as an active partner in the exploitation of natural gas in the Black Sea and for the project to enter in a straight line “, say Cotroceni officials.

The President of Romania also reiterated the need to invest in new energy production capacities, largely based on renewable sources, important for the energy mix assumed by Romania in the context of new European ambitions for energy neutrality.

Also, President Klaus Iohannis appreciated the active involvement of OMV Petrom among local communities, through socio-educational projects to ensure energy efficiency at the level of some schools.

Against the background of the current situation on the natural gas market, the President of Romania expressed the need to protect vulnerable consumers and the economy as a whole, as a result of the sharp rise in prices.