Acasă » Renewables » solar » Moise, PATRES: Romania has a very high potential of renewable energy, the only cheap energy for the future

Moise, PATRES: Romania has a very high potential of renewable energy, the only cheap energy for the future 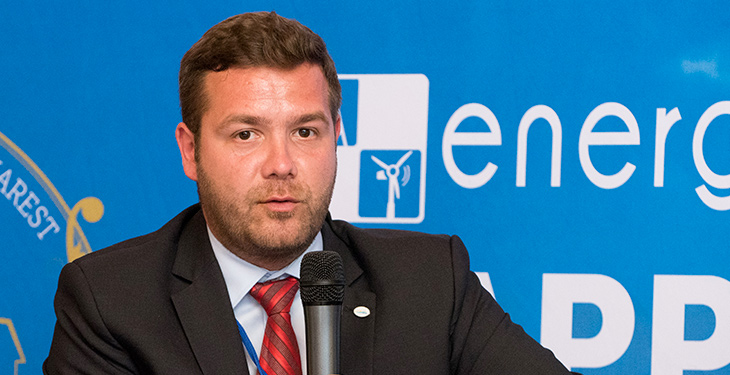 Romania has been blessed with vast energy resources and has an optimal energy mix, unfortunately it is not taking steps to fully capitalize on its potential, says Martin Moise, vice president of the Romanian Patronate of Energy Producers of Renewable Sources – PATRES, moderator of the ” Strategies for Cooperation – Putting all resources at work! ” panel, at the 2019 Energy Strategy Summit, an event organized by energynomics.ro.

“Romania is also ‘blessed’ with this kind of being extremely contradictory: we have basically two Romanians at all times: a modern Romania, an old Romania; a desire towards progress – two steps forward and one step back. We are characterized by this, even historically. Referring to the energy mix and all renewable resources – they have come at a very rapid pace, in a few years we have invested 8 billion euros and we have injected 5,000 MW in the system, without which we probably could have not pass the year. We went to the road with a generous scheme, perhaps sometimes, too generous, and then we massively cut it down and brought investors to the brink of bankruptcy – again, that nature of going from one extreme to the other,” said Moise.

“We have been talking about energy strategy for years, it is absolutely essential – and always when you want to do something, you need a well-thought-out plan – and at the same time we have an Integrated Energy and Climate Change Action Plan (PNIESC) where, unfortunately, the ambitions are small – the share of RES for 2030 is only 27.9%. The growth seems to be relatively small compared to the potential and where we are today – we have already exceeded the 24% threshold”.

Romania will not have classical resources – from the authorities’ declarations, if no final agreement with the Chinese partner is reached, Nuclearelectrica will make a single new reactor with its own forces.

“In the coal area, which is the resource we count for power over the Winter, there is a big problem – it is becoming a very expensive resource because of CO2 certificates. There was news in the press about the de facto state of bankruptcy of the CE Oltenia – I do not think we can afford such a scenario, but at the same time, the direction the mankind took is clear – we are talking about decarbonization. We cannot shut down coal-based units tomorrow, it would mean to shut off the light, but we have to think about what we will do in 10-15 years. We have to have a plan, because we like it or not, we will have to phase-out coal, for an extremely simple fact – the price. There has been much talk in the energy strategy about the adequacy of the system, about Romania’s independence, but what is missing from this strategy is price supportability,” Moise added.

“Finally, as Mr. Minister of Energy said, we are a member of the European Union, we are talking about the Energy Union, the energy systems are interconnected, we can no longer see Romania as an island”.

Currently, Romania plans to build expensive power plants and pays for CO2 certificates over 300 million euros only on behalf of CE Oltenia – and it is possible that in 10 years this cost will double, according to some studies.

“At the same time, Reactors 3 and 4 have a strike price well above the levelized cost of energy – LCOE of the renewable energy. Will our energy still „be competitive? Or we will discover that we are importing cheap energy from Germany, which clearly relies on renewables, has set a plan – phasing-out coal until 2038, phasing-out nuclear power by 2022… I would also like for us to discuss this issue, because, in the end, especially for industry, the price of energy must be bearable. Otherwise, we will discover that the industry will move in other countries where the price is lower… If we talk about investing in new plants, renewable energy is the cheapest. However, our proposal for 2030 is below the average set by the European Union. Are not we doing something wrong?” questioned Moise.

previousWhile Exxon threatens to leave, the Energy Ministry announces that it has issued its drilling license for Tuzla
nextMinistry of Energy announces the opening of a new lignite mine at CE Oltenia