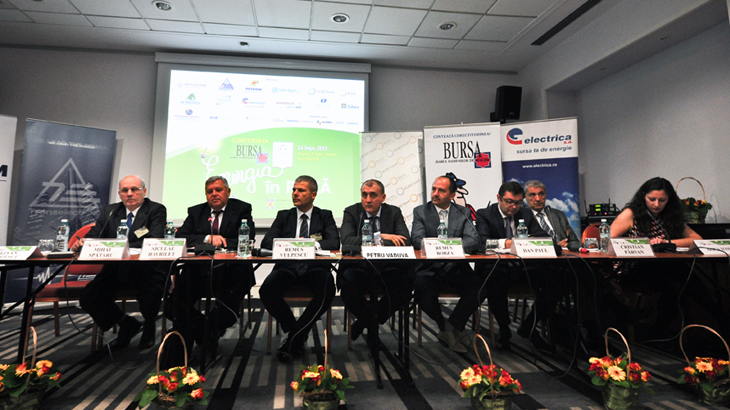 [one_half]Statistics, assessments on the energetic system and public policies collide and challenges each other when the liberalization process and its impact on the industry come into question.

“Energia în priza” conference is the latest example. Representatives from government, business leaders, consumers’ associations and journalists have discussed the effects of the electricity market liberalization on the industrial production costs.

Currently, 85% of the electricity used by industrial consumers comes from the deregulated market. In September was introduced just another step in regulated prices elimination for the industrial consumers, and starting from October 1st, the price of industrial gas will be increased again by about 2%.

President of the National Regulatory Authority of Energy (ANRE) Niculae Havrileţ announced that 95% of the gas stored for the winter comes from domestic production, compared to previous years when the percentage was only 75%. For this reason, ANRE imposed prices will not increase much: “From January 1st 2014, gas prices will likely reamain the same”, said Havrileţ. Recently, the ANRE president said the importde gas price reached at about $ 400 per thousand cubic meters, while the domestic gas is twice cheaper.

Business-men lament over the lack of transparency from ANRE

The regulator has been sharply criticised by Cristian Pârvan, general secretary of the Association of Businessmen in Romania (AOAR). Pârvan acused the lack of transparency and in particular that fact that since 2012 ANRE did not include the imported gas prices statistics in its monitoring reports.

Comparing statistical data and the actions observed in the energy system with the public statements and positions, Cristian Pârvan highlighted a number of inaccuracies and risks for the industry after the liberalization in the gas market. Moreover, inconsistent energy policies and inadequate practices and notions further complicate the decision process of Romania corporate medium. Cristian Pârvan urged for greater efforts towards energy efficiency, and for less talking about energy independence and liberalization. According to Pârvan, energy inefficiency is the main element affecting the competitiveness of the Romanian economy and industry.[/one_half][one_half_last]”One can not expect to be competitive when consumes 3.6 times more energy than the EU average per GDP unit” said Pârvan.

Carmen Neagu, member of the Supervisory Board of Transelectrica, noted that energy market liberalization means more than a chance to export and gradual price increases in order to align them to the European prices. Liberalization can also bring significant volumes of cheaper energy imports, which both the industry and households might find more appropriate than local production.
At his turn, Remus Borza, the person who guided Hidroelectrica through insolvency, said that at the moment the production cost for the company he oversees is nearly 40 euro/MW. For the Oltenia Energy Complex and the Hunedoara Energy Complex, costs are higher to almost 50 euros/MW. Under these circumstances, the big national energy producers do not qualify for exports to the European market.
Excessive installed capacity, recessive domestic consumption and old technologies lead to excessice production costs, resulting in extremely challenging situations. For example, a sale price of USD 160-170 /MW takes you out of the market, while lower prices on the same business models and personnel would reduce the viability of the large national energy producers Romania can not afford to close.

previousBosch Launches Off-the-Shelf Home Solar Power Storage System
nextRemus Vulpescu: We will not pay benefits for the company’s top management for 2 more years after they leave the office