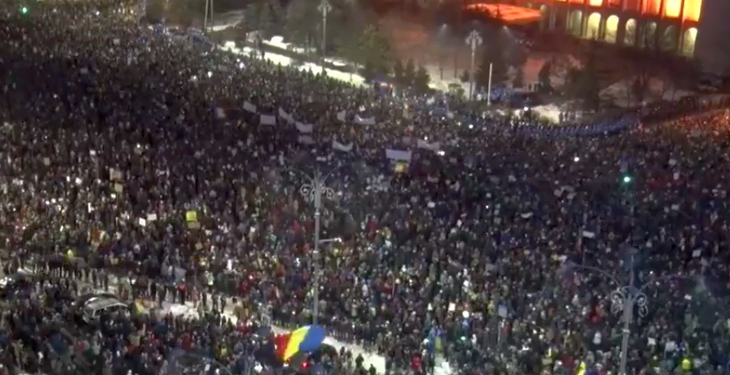 Over 300,000 Romanian protested on Wednesday evening in many Romanian and European cities against the changes introduced by Grindeanu Cabinet to the Criminal Code, the day before, by Emergency Ordinance. In Parliament, opposition parties PNL and USR filed a motion of censure against the PSD-ALDE supported Executive, who refused the public any additional explanations – with the singular exception of the Minister of Justice Florin Iordache.

În Bucharest, 130,000 people protested in front of government headquarters in Victoria Square, simultaneously with tens of thousands of protesters gathered in central squares in Cluj-Napoca (30,000), Timisoara (20,000), Sibiu (10,000), Iasi (10,000). The protesters claims were summarized in one slogan – “Repeal and leave!” – people ask the Cabinet to withdraw the Emergency Ordinance, and then to resign. Uprisings were accompanied by a wave of solidarity messages and warnings coming from employers, trade unions and embassies.

In a press release, the trade union confederation Cartel Alfa called on the government to withdraw the Ordinance 13/2017, which amends the Criminal Code and the Criminal Procedure Code, and declared its solidarity with the movement of public protest. Through the voice of President Bogdan Hossu, the confederation said that the hasten adoption of the normative act, in the manner that it was done […], is an act of defiance from the Government, unacceptable in a democratic society “.

Cartel Alfa President warns that such a bill could lead to a dangerous precedent. “This way of ruling sets a dangerous and worrying precedent for other bills to be realized in the following period: health law, education law, the pay law for state employees, the civil servant law, the Cod Economic etc”, added Bogdan Hossu.

In turn, the Employers Confederation “Concordia” drew attention to the need to rebalance the relationship between government and the social dialogue partners and civil society. “Besides the recent changes in criminal law, the recent adoption of tax measures, namely the cancellation of the ceiling to 5 salaries the payment of CAS and CASS, raising the minimum wage to 1,450 lei without proper consultation with the social partners or a transparent and coherent mechanism for establishing it, or granting an unreasonable period for public discussion of the 2017 budget in the social dialogue forums, all these are examples of an ongoing purely formal consultation process”, notes the employers’ organization which represents over 500 companies and more than 275,000 employees.

AmCham Romania expressed, in a press release, its deep disappointment regarding the reasoning, adopting procedure, provisions and effects of the Emergency Ordinance 13/2017 and of the project to amend the Criminal Code and Criminal Procedural Code. The lack of transparency in adopting such legislation despite the opinions and recommendations issued by the relevant institutions undermines the confidence in the Government and sends a strong negative wave of mistrust and uncertainty, both internally and externally, says AmCham.

While amendments to existing laws and procedures are occasionally necessary, these changes should be made only in the process of comprehensive and credible consultation with all stakeholders, The Embassies’ Letter

“It is extremely worrying for the business community and society as a whole, that legislative pieces with such moral, societal and economic implications with immediate and long term effects are adopted by the Government without observing the minimum requirements of transparency in decision-making.” In AmCham’s view, “the adopted legislation undermines the rule of law and derail from the fundamental principles of transparency, stability and predictability and strays Romania from the European values and standards”, the press release reads. Over 400 american, international and local companies are part of AmCham.

In turn, German-Romanian Chamber of Commerce and Industry (AHK România) expressed its concern that changes to the Criminal Code will have a negative impact on the Romanian-German economic relations. “In the opinion of German companies in Romania, changes introduced yesterday [on Tuesday] on the Criminal Code and Criminal Procedural Code through Emergency Ordinance put under questioning the will of the new government to continue the uncompromising struggle against corruption,” reads a public statement. AHK Romania is the largest bilateral chamber of commerce in Romania with over 570 member companies.

In a public message, six of Romania’s international partners and allies expressed “their profound concern at the actions of the Romanian Government on the night of January 31, 2017, which have undermined Romania’s progress on rule of law and the fight against corruption over the past ten years”. The six state undersigning the open letter are USA, Germany, France, The Netherlands, Belgium and Canada. “This act, in contravention to the collective wisdom of the entire judicial and rule of law community, credible elements of civil society, and the demonstrated concerns of Romanian citizens over the past two weeks, can only undermine Romania’s standing in the international community and risks damaging partnerships that are based on common values, inherent in the guiding principles of the EU and NATO”, it is written in the common letter sent by some of the most important.

previousACUE members ask for a quickly official analysis of the way the electricity markets are functioning
nextSC Gammis SRL, from Mediaş, sold 30 Dacia SUVs to Transgaz