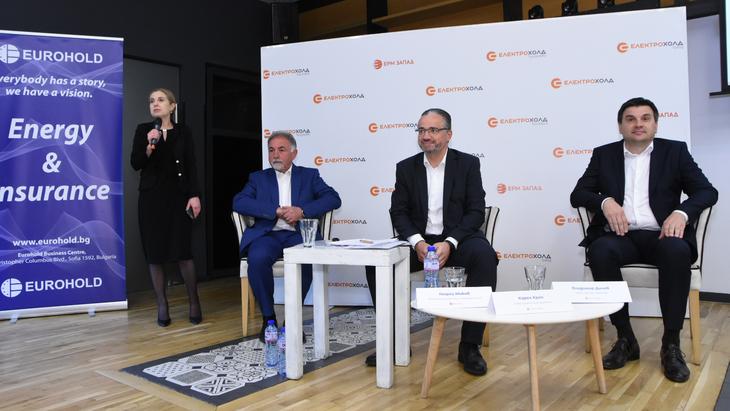 Electrohold, part of the largest public holding in Bulgaria – Eurohold, launched its new visual and corporate identity at an event on May 11th in Sofia. Electrohold Bulgaria manages the activities of the seven companies which Eurohold acquired from the Czech state energy company CEZ Group last year, through its wholly-owned Eastern European Electric Company B.V. The group has nearly 3 million customers and includes the leading companies in Bulgaria’s electricity distribution, supply and trade.

The new brand identity reflects the mission of Electrohold – a dynamically developing company that provides energy, invests sustainably in digitalization and modernization of its grid and works to improve the quality of life of its customers. It also recreates the values ​​of the companies in the group – professionalism, responsibility, efficiency, stability, trust and innovation. The new visual identity includes new names, logos, websites and an updated overall corporate design. “We decided to choose the evolutionary development of our brand. The logo and design reflect continuity with the previous identity of our company, which has always been a stable and reliable partner. At the same time, they reaffirm our new affiliation – we are part of a leading group in Central and Southeastern Europe that is constantly expanding its operations in the region. The new brand also highlights our position as a leader on the Bulgarian market”, said Karel Kral, CEO of the Electrohold Group in Bulgaria.

The largest power supplier for household consumers and small and medium-sized enterprises in Bulgaria is called Electrohold Sales AD, and the largest trader and supplier of electricity for industrial customers is Electrohold Trade EAD. The operator of the electricity distribution grid in Western Bulgaria – the largest in the country with a total grid length of over 58 000 km, is now called ElectroDistribution Grid West AD (EDG West AD). The names are registered in the Commercial Register.

The process of rebranding Electrohold’s customer service centers and other facilities of the companies will be completed in a few months. “Apart from continuity, the choice and combination of colors is also due to the development and process of transformation of our company,” said Desislava Borislavova, PR and Communications Manager at Electrohold Bulgaria.

Electrohold’s priority is to increase the quality of its services and improve customer services. At the moment, over 80% of Electrohold Sales AD’s services and over 90% of those of ERM West AD have been digitized. More than half a million customers are using e-invoices, and more than 200 000 are registered for sms services. The new corporate websites are also digital-friendly. “We recognize the strong interest in e-services and take this opportunity to encourage all customers to take advantage of them. It saves time, effort and money,” Karel Kral commented.

The other focus will be on investments in digitalisation and modernization of EDG West’s grid and services. From the beginning of 2021 to the end of 2023, nearly BGN 300 million will be invested in this direction. “We are preparing the grid for the new generation of electricity and at the same time we are working hard to meet our main commitment – maintenance of the largest grid in the country and non-stop supply. This is a privilege, but also a great responsibility. The efforts of over 3000 employees are involved, ” Karel Kral said.

Ongoing projects include advanced grid monitoring in real time and management technologies, as well as permanent monitoring of consumption and optimal use of teams. Drones are being introduced and artificial intelligence (AI) is being used – an important prerequisite for the development of the economy of the future.

Electrohold will follow its policy of a responsible investor in our society. A key element in the company’s sustainable development concept is to support vocational education, nature conservation and the improvement of the urban environment. “With the new brand we position ourselves as a modern and attractive employer. We will continue to upgrade our programs for young talents, “said Evgenia Nakova, Director of Human Resources at Electrohold.

Electrohold’s new brand identity is another step in Eurohold’s strategy. In the coming years, the holding will focus on the development of its insurance and energy business. The insurance subholding of the group – Euroins Insurance Group AD (EIG), operates in 13 countries in Central and Eastern Europe, serving 4 million customers. In Bulgaria and Romania, EIG is among the market leaders. Organic growth, diversification of the product portfolio and increasing profitability will be priorities in the insurance business.

An expansion is planned in the energy business. “We will look for opportunities for expansion in Bulgaria’s neighboring countries. We aim to become a leader in this sector in Central and Eastern Europe too,” said Assen Christov, Chairman of the Supervisory Board of Eurohold.

The aim of Eurohold is to achieve synergy between its insurance and energy businesses. “Along with electricity, our clients will be able to take advantage of valuable offers for insurance and other financial services,” said Kiril Boshov, Chairman of Eurohold’s Management Board. Initially, this model will be applied in Bulgaria, and later in other countries where the holding operates. “We will unite our businesses, strengths and experience to meet better customer needs and become even more competitive and successful,” said Karel Kral.

Eurohold Bulgaria AD is a leading financial and energy group operating in Central, Eastern and Southeastern Europe in the area of electricity distribution, supply and trade, insurance, leasing, car sales, investment services and asset management. It is listed on the Bulgarian and Warsaw Stock Exchange. Eurohold owns Euroins Insurance Group AD (EIG), one of the largest insurance groups in the region. EIG provides a full range of insurance products, serves over 4 million customers in 13 countries and has over 3,000 employees. In 2021, Eurohold acquired through its wholly-owned subholding, Eastern European Electric Company, the subsidiaries of the Czech energy company CEZ Group in Bulgaria, which have over 3,000 employees and serve almost 3 million consumers in the country.