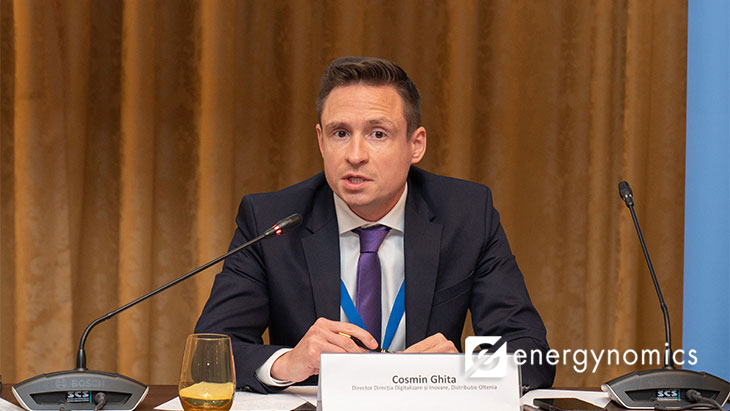 The war in Ukraine caused an increase in tariffs that multiplied the costs of energy distributors, and this situation turned into a cash-flow problem for energy distributors. However, Distribuție Oltenia has continued to invest in digitalization and has ongoing projects of 250 million lei, said Cosmin Ghiță, director of the Digitization and Innovation Department of Distribuție Oltenia, during the “Future of utilities – 2022” conference, organized by Energynomics.

“The old energy prices could not be sustainable. The current political context has amplified these costs beyond measure. As a power distributor, we felt the full effects of the war. This is perhaps the most challenging year. The most strongly felt effect was the increase in the price of energy, which produced a multiplication of our energy costs to cover the network losses, and this translated into a cash-flow problem for utility companies. The most important thing that we did was we continued to invest. Four projects worth 250 million lei are now being implemented, and other projects worth 76 million lei are waiting to be contracted soon,” said Ghiță.

Logistics operations have also been severely affected by the conflict in Ukraine, as much of the components required for electrical infrastructure come from China. Distribution Oltenia had to transfer part of the activities related to the supply of materials from the port of Odessa to the port of Constanța.

“There were many unpleasant situations, one being logistics. Many components come from China, through the port of Odessa to Europe. We had to adapt and move quickly to the port of Constanța, which specializes in the import of grain from Ukraine. For the components from China, the cargo price started from 3,500 euros, and now it is around 17-18,000 euros”, added Ghiță.

However, Distribuție Oltenia continued to invest in modernization and efficiency. Part of the investments is directed towards the modernization of the networks in order to reduce the duration and frequency of interruptions in electricity supply, but also to identify the theft of energy from the network.

The company allocated more than five million euros in the modernization of the low-voltage network, continued to implement the SCADA system, and now has more than 1,400 pieces of remote-controlled equipment in the network. An important place in the company’s strategy is the digitalization effort. During this year, Distribuție Oltenia installed 33,000 smart meters, in addition to those installed from European funds in 2021 and 2020. In 2021, the company installed 90,000 units, respectively 41,000 in 2020.

In the company’s digitization strategy, a very important pillar was represented by attracting European funds, a process in which the company has been involved since 2013 and which it accelerated in 2018-2019. In fact, the company has created its own department dedicated to this field.

Ghiță added that supporting prosumers in installing as many solar panels as possible represents a second opportunity to counteract the effects of this economic crisis, and the number of requests from customers has doubled. The company expected a lower number of applications for the installation of solar panels this year, but in August 2022 compared to August 2021 their number reached 6,200, from 3,100 a year ago. Out of the total, 84% of requests to connect photovoltaic installations to the grid come from domestic consumers.

“To be closer to the local authorities, we offered free installation of video surveillance equipment on our infrastructure in the concession area, to increase the comfort of citizens and fight crime. We continue to focus on network development, improving customer metrics and services and a digital economy. I would remain on a more positive note and I think that, looking to the future, we should all be more optimistic and build for a more sustainable and digital future”, said Ghiță.