Acasă » General Interest » Environment » Consortium by Shell and ETH Zurich get kerosene out of thin air, water and sunlight

Consortium by Shell and ETH Zurich get kerosene out of thin air, water and sunlight 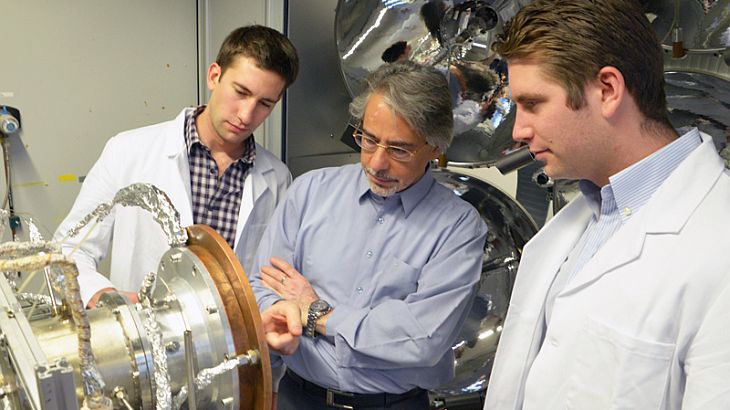 With the first ever production of synthesized “solar” jet fuel, the EU-funded SOLAR-JET project has successfully demonstrated the entire production chain for renewable kerosene obtained directly from sunlight, water and carbon dioxide, therein potentially revolutionizing the future of aviation. This process has also the potential to produce any other type of fuel for transport applications, such as diesel, gasoline or pure hydrogen in a more sustainable way, ETH Zurich announced.

The processing of syngas to kerosene is already being deployed by companies.

With this first-ever proof-of-concept for ‘solar’ kerosene, the SOLAR-JET project has made a major step towards truly sustainable fuels with virtually unlimited feedstocks in the future.

The SOLAR-JET project demonstrated an innovative process technology using concentrated sunlight to convert carbon dioxide and water to a so-called synthesis gas (syngas). This is accomplished by means of a redox cycle with metal-oxide based materials at high temperatures. The syngas, a mixture of hydrogen and carbon monoxide, is finally converted into kerosene by using commercial Fischer-Tropsch technology.

Although the solar-driven redox cycle for syngas production is still at an early stage of development, the processing of syngas to kerosene is already being deployed by companies, including Shell, on a global scale. This combined approach has the potential to provide a secure, sustainable and scalable supply of renewable aviation fuel and more generally for transport applications. Moreover, Fischer-Tropsch derived kerosene is already approved for commercial aviation.

“Although the individual steps of the process have previously been demonstrated at various scales, no attempt had been made previously to integrate the end-to-end system. We look forward to working with the project partners to drive forward research and development in the next phase of the project on such an ambitious emerging technology.”

SOLAR-JET (Solar chemical reactor demonstration and Optimization for Long-term Availability of Renewable JET fuel) was launched in June 2011 and is receiving financial support from the European Union within the 7th Framework Programme for a duration of four years. In a first step, the technical feasibility of producing solar kerosene was proven. In the next phase of the project, the partners will optimise the solar reactor and assess the techno-economic potential of industrial scale implementation. The outcomes of SOLAR-JET will put Europe to the forefront of research, innovation and production of sustainable fuels directly from concentrated solar energy.

An EU-funded research project called SOLAR-JET has produced the world’s first “solar” jet fuel from water and carbon dioxide (CO2). Researchers have for the first time successfully demonstrated the entire production chain for renewable kerosene, using concentrated light as a high-temperature energy source. The project is still at the experimental stage, with a glassful of jet fuel produced in laboratory conditions, using simulated sunlight. However, the results give hope that in future any liquid hydrocarbon fuels could be produced from sunlight, CO2 and water.

European Commissioner for Research, Innovation and Science Máire Geoghegan-Quinn said: “This technology means we might one day produce cleaner and plentiful fuel for planes, cars and other forms of transport. This could greatly increase energy security and turn one of the main greenhouse gases responsible for global warming into a useful resource.”

In a first step concentrated light – simulating sunlight – was used to convert carbon dioxide and water to synthesis gas (syngas) in a high-temperature solar reactor (see picture above) containing metal-oxide based materials developed at ETH Zürich. The syngas (a mixture of hydrogen and carbon monoxide) was then converted into kerosene by Shell using the established “Fischer-Tropsch” process.

Although producing syngas through concentrated solar radiation is still at an early stage of development, the processing of syngas to kerosene is already being deployed by companies, including Shell, on a global scale. Combining the two approaches has the potential to provide secure, sustainable and scalable supplies of aviation fuel as well as diesel and gasoline, or even plastics. Fischer-Tropsch derived fuels are already certified and can be used by existing vehicles and aircraft without modifications of their engines or of fuel infrastructure.

In the next phase of the project, the partners plan to optimise the solar reactor and assess whether the technology will work on a larger scale and at competitive cost.

Finding new, sustainable sources of energy will remain a priority under Horizon 2020, the seven-year EU research and innovation programme launched on Jan. 1, 2014. In the call Competitive Low-Carbon Energy published on December 11 last year, the Commission proposed investing €732 million over two years in this area. The call includes a topic on the development of the next-generation technologies for biofuels and sustainable alternative fuels.