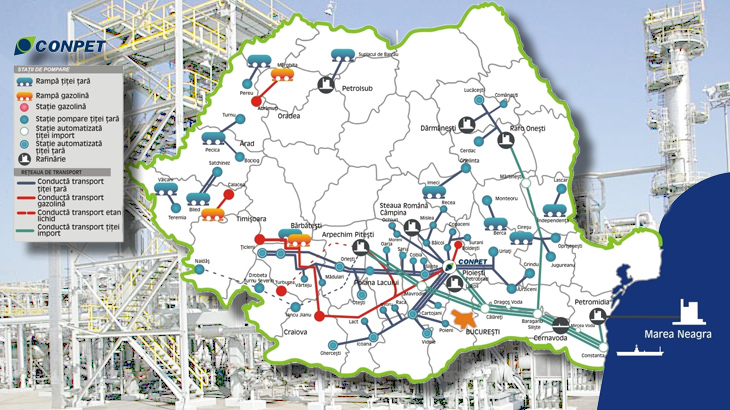 For the shareholders of Conpet, the company’s listing on the first tier of the Bucharest Stock Exchange (BSE) is a mandatory measure to increase the company’s visibility and help it to obtain financing for investment projects. In addition, this entry into the first league is meant to put pressure on management to strive for business development, increased performance and maintaining high transparency.

Starting with September 5, the shares of the national system operator for the transmission of petroleum products – Conpet Ploiesti (COTE) – were transferred from Rasdaq to the first category of BSE.

“Given the company’s development objectives, which include new investments and long-term projects, we believe that the easiest and cheapest way of financing such projects is financing through the capital market,” said Conpet representatives for energynomics.ro.

When you are there where big companies are all the behaviour of the company and management is different.

The first objective for Conpet is to interconnect the national system to regional and European systems. Currently, the company operates the national network of oil, ethane and gasoline pipelines, having leased the pipeline system belonging to the Romanian state. Conpet operates 3,800 miles of pipeline across 24 counties without being connected to the European network for transport of oil.

Interconnection – a chance for increased use

The transport system operated by Conpet is used in a proportion of 20 %. During the past three years, the use of the transport network was constantly near this level. In 2010, the transmission system was used in a proportion of 22%, with a slight increase in 2011 (23%) , and in 2012 the system was used in a proportion of 21%.
The quantities transported from domestic sources has remained about the same, while imported oil transport experienced a descending line. Consequently, the share of domestic vs import transportation structure increased from 62% in 2010, to 75% in 2012.
Conpet main customers are the operators of refineries in Romania. Ranked by transit volumes, OMV Petrom leads with a share of 66%, followed by Petrotel-Lukoil 31%) and Romeptrol Refinery (3%).

Hard hit by the crisis

The economic crisis has made ​​the volumes of crude oil transported annually to fall by half in five years. Thus, while in 2008 by Conpet pipes were transported approximately 12.3 million tons of oil, in 2012 the quantities halved. Turnover of the company fell by over 10 million in 2012, compared to 2008, while the number of employees decreased by 400 from 2008, to less than 1,800 today.

“For the moment it is clear that the system is under-exploited”, said general manager of Conpet. The amount of oil Conpet transported last year was about 4 to 4.5 million tons from domestic production, plus approximately 1.5 to 1,6 mililion tons from import.
Liviu Ilași explained that the quantities lowered after the closure of several business units that the company had contracts: Arpechim, Astra Ploiesti, RAFO, one refinery in Campina and another one in Suplacu de Barcău.
Conpet’s transport capacity is currently at 27.5 million tons per year, almost the same as in 1989, when it was fully used; that year, through its pipelines passed 28 million tons of oil, of which 20 million tons of import and the rest from domestic production.

200 million euro for the pipeline betwenn Pitesti and Pancevo

Conpet is working on developing its pipeline system to interconnect with the European system. After two rounds of talks with officials from Gazprom Neft and Transnafta Nis (Serbia), they decided to establish a project company and to start the feasibility study for the pipeline construction.
The Constanta – Pitești – Pancevo Pipeline would provide oil for the Serbian refinery, by extending present lines between Constanta and Pitesti, today severely under-exploited. In the future, the pipeline could be extended again from Pancevo to reach the Bosanski Brod refinery, in Bosnia.
The pipeline would be over 320 kilometers long, out of which about 280 in Romania and the rest in Serbia, and the building would cost over 200 million euro.
The pipeline would have a transport capacity of 7.5 million tons per year and is expected to supply oil to the refinery in Pancevo, operated by Gazprom Neft.

Liviu Ilași runs for his own succession

Conpet is one of the companies where the Government intends to introduce the so-called ‘private’ managers.
The deadline for applications for the position of executive director was recently extended until September 14. The current executive submitted the dossier to fill this position after a selection.
Ministry of Economy, which controls 58.71% of Conpet, named Liviu Ilași as general manager of Conpet in December 2012, replacing Nicolae Alexandri, who resigned after being elected on the USL lists in Prahova. Liviu Ilași has served as director and chairman of the Board of Directors to Conpet in February 2005 – March 2009.
Aged 49, Ilași has joined Conpet immediately after graduating from the Institute of Oil and Gas in Ploiesti, in 1989, and worked steadily for the company, where he held positions like engineer, head of the department, general manager.

previousGazprom will supply China 38 bcm of gas per year; the price is yet to be set
nextSmall investors have a good opportunity to speculate in Nuclearelectrica IPO