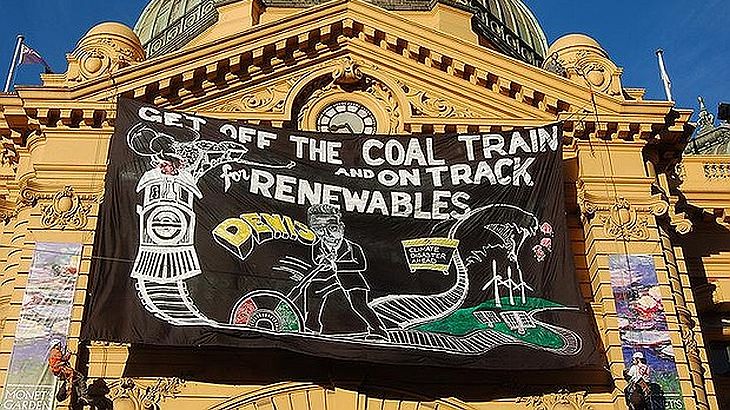 States and international organizations have recently made announcements that they decided to withdraw their support for the operation or funding of coal-based power plants. The latest data show that coal is currently used to produce 40% of total electricity worldwide, and its degree of utilization increased by 50% over the past 10 years. The U.S. government first decided to make an announcement through President Obama.

Most recently, the US Export-Import Bank provided over $ 1.4 billion for two projects in South Africa and India. U.S. is still the second largest coal producer in the world, and although analysts expect domestic demand to decline, in developed countries moving away from nuclear energy, such as Germany or Japan, it will grow.

In recent years the US introduced more stringent environmental regulations, and the expansion of renewable energy companies and natural gas production boom made the coal-fired power plants to shut down with long-term impact on demand. Decision is courageous in the historical context of North American politics and economics. For many decades, coal fueled the U.S. industrial base and substantial contributions made ​​by major coal manufacturers around election rounds delayed for many years the introduction of severe regulations.

Currently, in some US states fierce battles take place battle between supporters of coal and natural gas as the main source of back-up and balancing energy systems, especially in the light of recent decisions of the Environmental Protection Agency (EPA). EPA concluded that the groundwater in three storage sites for waste resulted from coal mining, located in the western part of Pennsylvania, is contaminated.

Public statements about the disengagement from coal consumption also came from the World Bank and the European Investment Bank (EIB), the organization that funded this kind of initiatives with over $10 billion over the last five years. EIB has established a performance standard that prevents loans for construction of new coal plants if they do not use biomass as fuel.

It is estimated that the European Bank for Reconstruction and Development will follow the example and may in turn limit the support for these projects. Change of direction could influence major global funding provided for such projects, even for the states that face major environmental risks since there the environmental rules are not well developed and the legal systems, political and economic relations are still fragile.

Estimates of global coal demand are as varied as unsafe. What can be said with certainty is that after it introduced the banning for exports of coal, China will remain for the foreseeable future the most important producer and consumer of this natural resource. From the 70s China’s development involved the transition from an agrarian economy to an industrial and urbanized one. In the 60s more than 60% of the active population was engaged in agricultural activities, but after three decades, this figure almost halved. The economic growth increased the consumer needs as well.

To meet these requirements imposed in an accelerated pace, China produces from coal about 80% of the power it consumes, and of this about 70% is targeted to power factories. Meanwhile, China produced in 2009 over 48% of the coal produced in the world, but nine years ago 28% of all coal produced in the world was produced in China. Coal remains the cheapest option for power generation, available in large quantities in this country, but widespread use has entailed considerable degradation of the environment and reduction of optimal planning for housing.

Coal production in the EU has decreased substantially over the last 20 years. In 2010, it represented only one third of the 1990 level, but Europe still continues to import coal to meet demand. However, despite its commitment to reduce with 20% by 2020 the greenhouse gas emissions levels recorded in 1990, coal-fired power plants in the European Union in recent years started to work again at high capacity. One of the factors that made coal attractive again is the sharp decline in its price on the international markets due to increased U.S. production of natural gas and the coal extracted is directed mainly outwards.

The second factor is that in the confrontation between the prices of natural gas vs. coal prices, the latter is coming out victorious, since the European natural gas prices are the highest in the world. A third important factor is the failure of the European platform for carbon trading ETS, the EU’s central instrument for combating climate change. European Commission seeks to fundamentally reform the market for carbon allowances. Until then ETS remains unable to penalize the use of coal-based power plants.

Moreover, EU registers coal-production capabilities that are in a stage of construction. New units in Germany and the Netherlands will be connected to the system in the second half of 2013 and in 2014. Furthermore, two new integrated coal-fired power plants have already been completed in Germany. Other construction plans are underway in Turkey and the Balkans.

Although electricity generation is being diversified in terms of raw materials in Europe there will remain few hotspots, where coal mines will continue to be important to the national power systems. One of these places is Romania. The share of coal in electricity production in Romania varies at around 40%, most of which is pit coal. Also, the Government Decision no. 138 of 3 April 2013 prioritizes the transmission of thermal power plants energy into the system. Despite all that, in the first half of 2013 production of power plants was reduced by 26% because of lower demand for energy, wind power and a good hydrological year.

Romanian government then proceeded to set up “energy champions”, in fact companies that until that time had heavy losses and were to merge. In this way viable and non-viable coal mines were integrated into the work of thermal power plants. In March 2012 the General Meeting of Shareholders from Craiova, Rovinari and Turceni Energy Complexes approved the merger and the creation of Oltenia Energy Complex Company. The company consists of three energy units plus National Company of Lignite Oltenia.

According to mining restructuring program approved by the EU and IMF, three coal mines in the Jiu Valley will be closed by 2018, while the other four were retained and included in Hunedoara Energy Company, a second energy champion. From July 2012 Hunedoara Energy Complex absorbed the National Coal Company Petroșani.

After this process, Hunedoara Energy Complex includes Mintia and Paroşeni thermal power plants, and the viable coal mines Vulcan, Lonea, Livezeni and Lupeni. Its main activity is the production and supply of electricity and heat produced from coal. Hunedoara Energy Complex investment needs are considerable and two Chinese investors announced that they are willing to invest between 200 and 300 million euros in Mintia thermal power plant and another 60 million euros in viable coal mines.