Acasă » General Interest » Chimcomplex will invest 725 mln. euro over the next three years, gets listed to the first tier

Chimcomplex will invest 725 mln. euro over the next three years, gets listed to the first tier 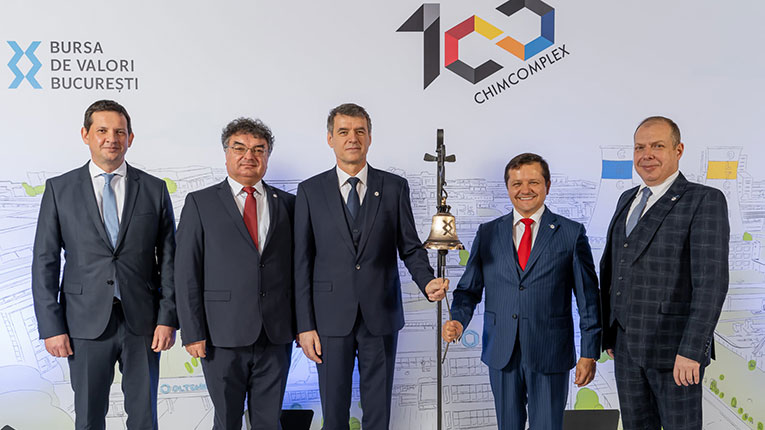 Chimcomplex will make investments totaling 725 million euros over the next three years, said the company’s main shareholder and president, Stefan Vuza. Chimcomplex shares were transferred from the “small” market, AeRO, to the Regulated Market of the Bucharest Stock Exchange, on Monday, under the symbol of CRC, after experiencing a continuous growth in the last year, according to BVB quotations consulted by Energynomics.

“This growth is a delayed recognition of the performance of the company that bought Oltchim’s assets in 2018. These assets were valued by Winterhill in England at 1.1 billion euros. The market noticed this transaction, but forgot to react for more than 2 years, until April last year. Chimcomplex has historically inherited a very small share capital, of only 60 million euros.

Compared to this, the company’s net accounting assets are over 30 times higher and it is easy to notice that. Just one of the over 35 installations that both companies have, combined, has an estimated value of between 40 and 65 million euros. As a result, the exponential growth was inevitable and even now in 2022 it does not reflect the accounting reality,” said Adrian Dimitriu, the CFO of the company.

At the same time, Chimcomplex is the main counter-candidate of the Poles from PKN Orlen to take over the most important assets of Rompetrol in Romania, according to Energynomics sources.

“It is a historic day for Chimcomplex and we will certainly have a successful partnership with the Bucharest Stock Exchange. We have a common interest in increasing the number of investors: we, CRC, are and will remain a national company, with Romanian shareholders, to which we will attract many other Romanian investors. Increasing the number of companies – we announce that we will list two other companies in the group on the Stock Exchange and prepare green financing: we will launch in just a few months the strongest green bond plan, under the umbrella of Greencomplex, which is part of the group of the Romanian Chemical Company (CRC), worth 110 million euros through which we will finance four green product lines. This year Chimcomplex launches the first issue of international bonds and following the selection of the offer we signed the contract with Rothschild in December as senior adviser and now we are already in the process of obtaining the rating and the bonds will be issued in May, after completing all formalities,” said the president of CRC, Ștefan Vuza, during the listing event at the main tier of the Stock Exchange.

“This year Chimcomplex is launching its first international bond issue. In the second half of the year, after the approvals of the extraordinary general meeting of shareholders, we intend to start the steps for a share capital increase operation, which we hope will exceed the expectations of investors. The two capital actions mentioned are aimed at starting the strategic investments for the relaunch of the lines of chemicals in conservation. Both chemical platforms use only 20% of their capacity. We are also considering the construction of new lines of products, which Romania is currently importing at exaggerated prices“, added Vuza.

”The Strategic Plan 2022-2030 provides a total investment of 2.5 billion euro and is the largest investment package in the chemical industry in the last 30 years, divided into three stages: The first package consists of the issuance of 350 million euro bonds (the largest international bond issue in Romania to date), followed by those on the capital market of 225 million euro. These two financing lines, together with the EBITDA for the next 3 years will provide the necessary financial resources for the first investment group, ie the vertical one, which is of 3.6 billion lei or 725 million euros. We intend for these record investments to be made in the next 1,000 days. The second investment group will be announced to the public according to the regulations on the capital market.
We estimate that the CRC Group will exceed the first billion euro in value of goods production in just 3 years and that the turnover will reach 10 billion euros only vertically, by the end of the decade,” added Vuza.

previousRomelectro and Hidroconstrucția enter insolvency procedure
nextAFEER: The state is late in paying suppliers the money for energy bills offset