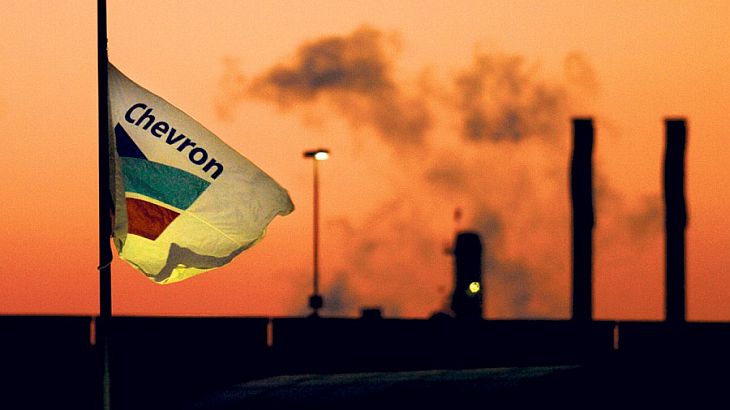 Chevron Romania decided to resume operations on Monday at the location of the first exploration of wells of shale gas in Romania, a perimeter near the village Pungești , Vaslui county . Company return to the village was met with protests from people in the area.

Testimonies collected by local media that reached the national media show situation is tense at Pungești and gendarmerie intervention was needed for the company’s machinery and workers to reach the land leased for exploration. If tests show viable deposits , Chevron will start exploitation.

Reports show  that Chevron crew came to the area at around 5:30 in the morning , with Police corps.

A  Vrancea area daily noted this morning that while Chevron brought their machines to Pungești , “the people of the protest camp and villages Pungești -Siliştea , Armăsoaia and neighboring villages were mobilized and tighten to the land where Chevron wants install the probe. From Barlad, Vaslui, Negreşti , Bacesti  went to Pungești dozens of people in support of the protesters  camp.”

From the area began arriving information accusing the U.S. company and Gendarmerie of maltreatment to protesters. Some of the people arriving in the area were forced to seek medical care  and most of those gathered for protests against the project were roughed up and forced the use of force to free the  way. The local daily notes also that the local authorities are unavailable and cannot be contacted for further information and media access in the vicinity is prohibited.

The Police and Chevron have issued information that aim to clarify and calm the spirits . The press releases state that the Gendarmerie crews presence at Pungești is “to ensure a climate of normality in the area, to prevent any incidents that may lead to disturbance of public order , to ensure fluency in the ways of communication and prevention committing any antisocial crimes” .

Gendarmes have released a blockage imposed by about 100 persons , but local media reports refute these remarks , highlighting the disparity between the number of gendarmes (which would be seven times more than those who protest ) and measures imposed on demonstrators. After unlocking the access road, the Gendarmerie notes that 7 people were brought at the premises of the County Police Inspectorate and a vehicle was damaged .

Chevron confirms resumption operations at Siliştea Pungești , Vaslui county , and stresses that it intends to conduct exploration activities exclusively using conventional technologies  at the EV -2 perimeter under permits obtained in early October 2013.
” Our priority is to conduct these activities in a safe and responsible towards the environment in accordance with environmental agreements under which we operate. Chevron reiterates its commitment to build  constructive and positive relationships with the communities where they operate and to continue dialogue with the interested public , local communities and authorities , about its projects,” reads the official position of the company .