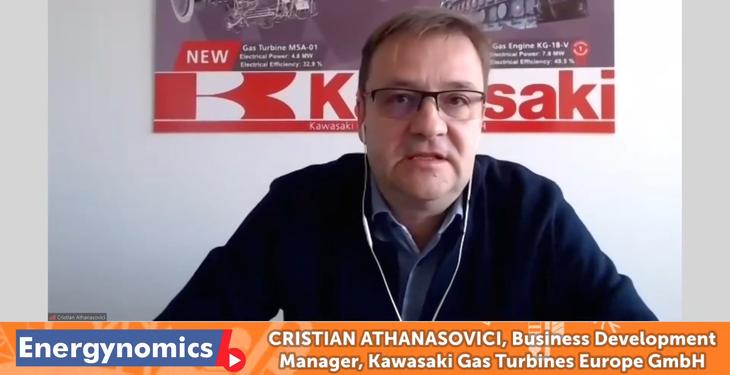 The cogeneration bonus scheme will be interesting from the perspective of increasing the dynamics of investments in the industry. “At the moment the issue of the environment is acutely raised, from the perspective of CO2 emissions and not only. We need to implement projects that, in addition to natural gas, considered a transition fuel, would also include renewable sources”, said Cristian Athanasovici, Business Development Manager, Kawasaki Gas Turbines Europe.

“I hope the new cogeneration bonus scheme will be applicable as soon as possible, even if it is provided for next year, and we hope it will be a scheme that, indeed, is no longer focused on covering the operating expenses and is directed to promoting investments”, said Athanasovici, during the conference “Decarbonization: How fast? Where to?”, organized by Energynomics.

Kawasaki is a global producer of energy equipment, present in Europe especially through the division that produces gas turbines and internal combustion engines. In essence, this equipment uses natural gas and has an installed capacity of 1.8-34 MWe, for gas turbines and 5.2MWe and 7.8MWe for engines.

“We benefited from the support of colleagues in Japan for development around this new fuel – hydrogen – and at the moment all our equipment can burn this fuel, to a greater or lesser extent, blended with natural gas. All the equipment we produce, whether in cogeneration or only for electricity production, can use natural gas mixed with hydrogen”, he said.

Kawasaki last year developed a new engine, with a power of 7.8MWe, which has the highest electrical efficiency in its class – 51%. The engine was awarded by the Advanced Cogeneration and Energy Utilization Center Japan. “We are proud of the award received and we will respond to the needs of those who want to use hydrogen as efficiently as possible in the production of energy with these new solutions”, added Athanasovici.

At the same time, Kawasaki has developed in Kobe, Japan, a 100% hydrogen-fueled power plant, of 1.8MWe. “The results of this power plant are very good and we are ready to copy-paste such project in Romania and not only. We need to make sure that the new cogeneration power plants that we propose are extremely environmentally friendly and for this reason, I personally believe that very soon there should be hybrid solutions available that will combine the cogeneration technologies with renewable energy – respectively with solar panels, photovoltaics, with organic cycle and other solutions. From this point of view, Kawasaki is very open, we are ready with new equipment”, concluded Athanasovici.

previousHavrileț: The Ministry of Energy is finalizing the list of draft laws related to the Modernization Fund
nextPetru Rușeț, Siemens: We can cover the transition to hydrogen at any time