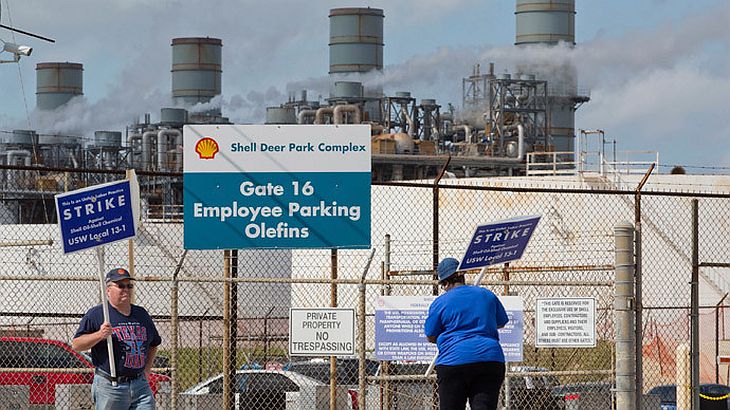 United Steelworkers Union (USW), which represents employees of over 200 refineries, oil terminals and pipeline producing factories and chemicals, triggered a strike at nine production units, this being the largest protest in the last 35 years, reports Bloomberg.

The protest is based on a lack of agreement regarding the extension of the collective labor agreement for 30,000 employees, which expired this Sunday. The union rejected five contract deals made by Royal Dutch Shell on behalf of the oil companies, from the start of negotiations, on January 21. The last strike triggered by USW nationwide was in 1980, and lasted for three months. A strike of all members of USW could disrupt about 64% of the fuel production in the United States.

Shell represented the oil industry in the negotiations with the union members, without success so far, since the two proposals were rejected by the union members. After the final rejection, “Shell refused to submit a counteroffer and left the negotiating table. I had no choice but to announce the strike,” said USW President Leo Gerard.

“It’s about health and safety problems that the workers face every day, such as overtime, fatigue monitoring standards, that companies alter as they wish,” said Ruben Garza, Executive Director of USW.

Gary Beevers, who leads the negotiations on behalf of USW, said in a statement: “This strike is not about money, it is about imposing onerous work overtime; the weak personnel protective measures; the hazardous working conditions that the industry continues to ignore; the daily outburst of fire, emissions, spills and explosions that threaten local communities with the industry not taking any action; the refusal of the companies to provide opportunities for unskilled workers; the erosion of the working environment quality, where union members workers, qualified and experienced, are replaced by external contractors.”

Ray Fisher, a Shell spokesman said in a statement that the group remains committed to resolving disputes with USW and hopes that the talks will be resumed as soon as possible, for concluding a three years contract. Meanwhile, the current collective agreement was extended for one day through an annex, the duration for negotiations. Refineries affected by strike in California, Washington, Kentucky and Texas, belong to companies such us Tesoro, Marathon Petroleum, Shell and LyondellBasell Industries.