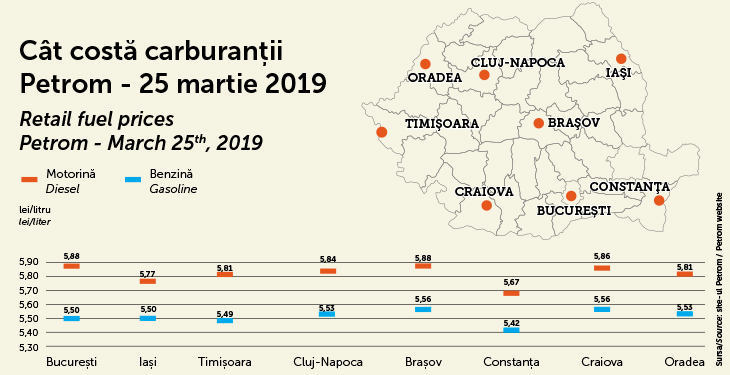 The price of gasolines sold by Petrom climbed six bani during the last week in all eight stations monitored by energynomics.ro, reaching in each city the highest level of the year. The upward trend in gasoline prices continues, with an average increase of 1.1%, the tenth in the last 12 weeks. Since January 7, gasoline price increased on average by 9.75%.

This week, the price increases are identical (0.06 lei). Constanţa continues to have the lowest price for gasoline (5.42 lei/liter) among the eight monitored cities. The highest prices for gasoline are to be found in Braşov and Craiova (5.56 lei/liter), and in Bucharest (5.55 lei/liter).

For diesel, there was yet another stable week, the second in the last three weeks, in all the eight monitored cities. On average, diesel prices grew by 8.9% in 2019.

Oil prices seem to have stabilized on international markets in the past week, after three weeks in a row of strong advances. For WTI, with a1.5% decline today, compared to the price last week, the quotation returns under $59 a barrel; a 1.85% decline for the Brent, and transactions under the $ 67.7 per barrel, today. Since the end of last year, WTI crude oil has risen by nearly 30%, while Brent has risen by over 24%.

previousEPG Summer School 2019 will take place between 25 July and 2 August 2019 in Bucharest
nextThe final version of GEO 114 – presented on Thursday, each line ministry discusses the requirements from the market