By 2022 Germany will have shut down the very last nuclear plant, as by now half of the capacities being decommissioned. Europe’s richest economy has reached a share of 32% renewables in 2016, up from 6% in the year 2000, with power from wind and sun at a lower cost than power from new gas and coal fired power plants – and expected to go up to 35% of the country’s consumption for the entire 2017, as newly-installed wind power is booming. However, the German lesson doesn’t stop here: it has become a huge exporter of power: coal power. And while there’s a national goal to reduce power consumption by 10 percent by 2020, currently, it seems that this goal will not be reached, says Dr. Patrick Graichen, Director of the German think tank Agora Energiewende, in an exclusive interview for energynomics.ro Magazine.

How is the transition towards the Energiewende progressing?

When we talk about the Energiewende we have to distinguish four different but interlinked tracks. 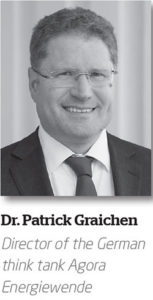 The first is the nuclear phase-out. We started right after the disaster of Fukushima in 2011 to shut down the oldest and most the dangerous nuclear power plants. By 2022 Germany will have shut down the very last nuclear plant. Currently about half of the originally fleet has been shut down. So, we are right on track.

The second is the deployment of renewable energies in the electricity sector. Both in terms of cost and in terms of total installed capacity, Germany has made tremendous efforts during the last five years.

We have reached a share of 32% renewables in 2016, up from 6% in the year 2000. Power from wind and solar energy now is coming at a lower cost than power from new gas and coal fired power plants. This is a quite recent development and not only German, but a global one.

The main reason is that the production of coal power has not been decreased as needed. Why? Germany has become a huge exporter of power, to be more precise: an exporter of coal power. Energiewende’s track number four is efficiency. We have a national goal to reduce power consumption by 10 percent by 2020, but currently it seems that we are not going to reach this goal.

What changed during the past three years in the nuclear field, how many centrals have been closed, and how much money did it cost?

Since 2011 we have closed nine nuclear power plants, subsequently the amount of nuclear power decreased by 50 percent. The next plant will be turned off by the end of this year. The effect on power prices of the nuclear phase-out is neglectable – actually power prices are today a lot lower than in 2011.

Is there today a shift from closing the entire pool of centrals powered by nuclear energy or is the initial plan still on?

What would that mean for the energy mix?

By 2022 Germany will decrease the share of nuclear power in its power mix to zero percent. Currently it is at 13 percent. The gap in power production will be filled with renewable energies, mainly wind power, on- and offshore and solar power. In order to ensure the security of supply in the power sector, we probably will see some more gas fired power plants returning onto the market which are currently not operating because of the overcapacities in the Central-West-European power market.

How is Energiewende advancing on the other field: renewables?

Very well. In 2016, renewable energies accounted for almost a third of the power consumption in Germany. In 2017, we expect more than 35 percent share. The main driver is wind power – we have seen record numbers of newly installed capacities over the last couple of years. Wind power is already very affordable and will become even cheaper at the end of this decade as it turned out after the latest auction. Solar power today also comes at a very low cost – about the same level as wind power. Here, Germany could do more – we are not installing enough new solar panels. The new government should be more ambitious for the 2030 renewables targets, especially because having more renewables does not mean higher cost anymore.

How did wind, solar and biomass-cogeneration cost evolve?

How did the state subsidies in the wind and solar and biomass-cogen evolve lately, and what are the future targets?

The renewable energy surcharge on the power bill being paid for renewable energies has been quite stable since 2013. Before 2013 German consumers had to face sharp increases in the surcharges of the power prices. The reason was that Germany took a lot of solar power into its energy systems at times when it was still expensive. This is over, solar is cheap now. Hence, since 2013 both the surcharges and the power prices have not changed substantially anymore. We also expect them to stay constant in 2018.

What’s your view about the future of the German electric cars field?

Today this segment is still small, but the growth rate is impressive: The number of newly registered electric cars doubled in October 2017 in comparison with September 2017. I can imagine this trend to be lasting: All major car makers announced new electric models; moreover, as the battery prices are on a steep decline.

This interview firstly appeared in the printed edition of energynomics.ro Magazine, issued in December 2017.