In Timisoara, specialists in energy and agro-food industries brought real content into the series of seminars proposed by energynomics.ro and TMT PR under the “Bioeconomy – Energy Efficiency in Agro-Food Industry” concept. Five speakers animated the dialogue in the early part of the day, and then most of the participants visited the COM ABM biogas plant, about 40 kilometers near Timisoara. Cluj-Napoca is the next stop, on November 6th!

At the event in Timișoara, it was established that through smart and sustainable management, there is sufficient biomass (especially waste biomass) in Romania for the energy needs of today’s society.

Mankind is at a turning point, moving from the industrial revolution and the oil age to the bioeconomy, says Dr. Teodor Vintilă, biotechnology engineer, Chief of Works at USAMVB Timişoara, Faculty of Bioengineering of Animal Resources, Department of Biotechnologies. “Without the involvement of the industry, the business area, and especially the regulatory area, we cannot make this step, although everyone knows we have to do it, because resources are near exhausted. On the other hand, human society tends to increase the degree of comfort, which means mainly an increased consumption of energy and other materials for mass consumption. “Consumption generates waste. That is why building a circular economy is needed.”

In this context, we have to take into account that biomass is the “greenest” source of energy, Professor Vintilă urged. “Biomass takes up the solar energy and stores it in molecules, which we can process in terms of consumer products – from food to energy and the chemical industry. All this must be done intelligently, without waste.”

We, in the Department of Biotechnologies at the University of Agricultural Sciences of Timisoara, apply these biotechnological processes, both on a laboratory scale and on a micro-pilot scale, as research and innovation activities, says Dr. Teodor Vintilă, Biotechnology Engineer , Head of Works at USAMVB Timișoara

USAMVB Timişoara has already carried out a study covering the West region, which established the methanogenic potential of various organic waste materials from agriculture and municipal waste. “We use a system containing 15 bioreactors, in which we process organic matter in an anaerobic system and convert it into methane. Over time, we have approached various raw materials, from fats, slaughtering waste, sewage, sludge, manure, different types of biomass, which we have analyzed and quantified the potential of methane production in each case, the energy contained in this methane and how these organic materials can be transformed into electricity and heat”, he said, presenting various results of the study. “We have a total potential of 8.6 TWh per year of energy that can be produced from waste – which exists already – with methane being released into the atmosphere by degradation of this waste, with a carbon footprint 20 times higher compared to carbon dioxide. It could be captured, transformed by burning into carbon dioxide, producing energy for society instead of allowing it to be released into the atmosphere”, Professor Vintilă said.

By collecting organic waste from the West region and converting it to biogas and energy, cogeneration units with a total capacity of 460 MW could be fed – about two units from the Mintia thermal power plant.

“We have a consumption of 3.8 TWh in the West area per year in the four counties. From waste we can produce 3.4 TWh, which means 89% of the consumption. So, by using these organic waste, we can cover 89% of the region’s consumption by turning them into methane, then into electricity, heat and organic fertilizer.”

There are currently about 11 biogas stations in Romania, while in countries like Germany, there are 10,000. Teodor Vintilă stressed the need for a support scheme, such as a preferential take-over tariff, where energy is paid according to its sources. “The new law needs to be discussed and implemented as soon as possible in order to make progress in this area.”

Eaton is a company specialized in energy management and globally is one of the leading manufacturers of industrial and commercial components. Over time, with acquisitions, Eaton has become a market leader, having the most complete portfolio, starting from power distribution systems, fire protection, lighting and control systems.

“We are present on all continents, with our own factories, service centers, sales offices and technical support. In Romania, Eaton has three own factories and 3,000 employees. ”

Two of the factories are located near Baia Mare, and there are manufactured control and protection devices, metallic garments and accessories, while a third factory, located in Arad, produces safety lighting. From these factories, Eaton sends products to all its logistics centers. 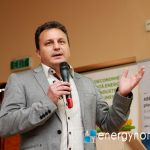 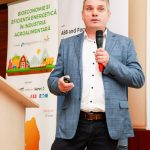 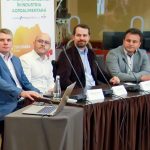 “We offer medium voltage solutions, switchboards, fuses, and recently we also have bought a transformer factory, which we will hear more about in the coming months. We offer lighting, safety lighting, solutions for heavy environments, and in the agro-industrial area, automation solutions with converters and soft starters where we can operate electric motors, contactors, automation and other solutions, including UPS and lithium-ion battery storage solutions”.

PV is the market with the highest development

ABB was founded more than 130 years ago (through the merger of Asea and Brown Bovery) and grew in the market because it invested in research and development (R&D), said Constantin Ichimoaei, executive manager at ABB Romania. Today, ABB has about 147,000 employees in more than 100 countries, with a turnover of more than € 30 billion, investing more than € 1.5 billion each year in R&D. “We have more than 7,900 researchers and engineers developing inovative solutions. ABB also colaborates with Romanian universities offering them the latest technologies available.”

ABB produces equipment for generating renewable energy. In respect to solar applications, it is involved in contracts for delivering invertors totalling over 15 MW this year in Romania, on buildings’ rooftops.

“We have to look to the future. Among the mega-trends of the future we include urbanization; around 70% of the world’s population will live in cities in 2050. When talking about digitization, we are talking about the integration of flexible energy production: photovoltaic, wind and e-mobility, electric car chargers. According to some studies, in 2040 over 55% of cars will be electric”, Ichimoaei said.

The highest development is recorded in the photovoltaic market. “If 10 years ago we were talking about installing solar projects of 10-25-50 MW, projects where we participated with either the solar inverters, the low or medium voltage equipment, the transformers, or the 110/20 KV stations, at present we are talking about small, distributed projects. I do not expect to see large projects in the ground soon in Romania. We are talking about residential area, about the Green House – a program I hope to see started very soon. Within residential projects, there are projects with or without storage. At the level of industrial buildings or supermarkets, three-phase inverters, connectable and remotely monitored are important. We are currently deliver solar invertors for three major projects in Romania on the roof of supermarket chains “.

Control Point was established in 2005 and operates in areas such as industrial automation, electrical installations and photovoltaic solutions. The company based in Brasov would like to have more local projects. “At the moment most of our projects are executed outside Romania. We are Valmet partners for automation solutions; we started from automation solutions, and later we developed other solutions, also for the agro-industrial sector. We have a lot of projects in the Western part of Europe, we would like to have more projects in Romania”, says Daniel Bertalan, Control Point representative. 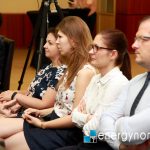 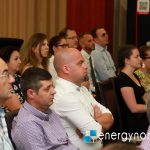 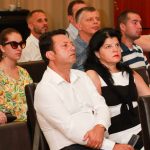 The Control Point Group has projects implemented in the thermal and hydro area but also in other areas in the energy market. “For a number of years we have had a lot of biomass and waste based energy projects. We have implemented projects on everything related to gas turbines, biomass, biogas, while on the agrobusiness we have several projects implemented for silos automation. Last year there was a project in Satu Mare, with Control Point as a subcontractor for electrical installations and automation.”

The company is also present in the area of waste recovery, including the production of biogas through anaerobic digestion, biogas burning, gypsum and other processes. “From one ton of municipal inorganic waste about 1,100 KVh of electricity, or centralized heating can be obtained. From the ash resulted in the combustion process, ferrous and non-ferrous metals can be recovered. We had a 68 MW such a project in England.” He also presented the company’s projects in the area of organic waste use. “We use 32,000 tons of biomass or organic waste, producing 3.8 million cubic meters of biogas annually or the equivalent of 660 KVh per ton of electricity,” he said.

“In Western Europe such plants have been built for many years, either with incineration or with composting or anaerobic digestion, and our hope is to see as many projects as possible in Romania.”

Established in 1995, COM ABM carries out activities in cereals crop and wholesale trade, electricity production, treatment and disposal of non-hazardous waste. In order to expand its activity, the company finalized in 2015 a project with European financing (Sectoral Operational Program 2007-2013 – CCE, Priority Axis IV) – “Biogas and Biomass Power Plant”, with a total investment value of 25.62 million lei, out of which 30% was co-financing.

The production capacity of the plant is 0.988 MW electric and 0.99 MW thermal. The activity consists in storing and ensiling the green mass, taking it over and feeding it into the fermenters. An anaerobic fermentation process takes place in the two digestors, resulting in the biogas that is captured and led to the cogeneration group where electric and thermal energy is generated. Following fermentation, the resulting sludge is given on farmland, as it is an excellent natural fertilizer.

COM ABM’s project was one of the first of its kind in Romania, hence the need for specialized information and advice. Specialists for across the border, in Hungary, but also from Romania, in Carei and Suceava stations, were needed.

At the COM ABM biogas plant, 20,000 tons of biomass is needed each year for the 1 MWh plant. Over half of the green mass needed to generate energy comes from its own sources – triticale crops, a wheat and rye hybrid with high biomass potential. Manure from animal farms (especially cow’s urine) as well as food industry residues from farmers and processors in the area are also added, for reducing the high transport costs. 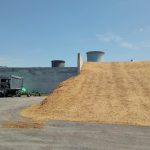 The plant is fully automated, this the human resource needed is quite small: the team includes only 3 people and 2 contractors working on request. For example, any abnormal parameter change is automatically transmitted through a notification to mobile phone. For the transport and handling of the green mass, the company also owns specialized machinery: tractors, push-pull trailers, vacuum tank, front loader.

The production ensures the energy needs of the station and the energy is injected in the national network at a price of 160 lei and 1.5 green certificates per MW. Until the closure of CET Arad in the summer of 2018, the company also exploited the thermal energy.

Based on the invitation from energynomics.ro or TMT PR, access to the seminar is open to all professionals in the Romanian economy: decision makers in agriculture and food industry in Romania, from public authorities and companies ‑ from start‑ups and SMEs to the largest enterprises, ESCOs companies, experts and professional organizations, accredited energy managers, academic environment. You are welcomed to write us at office [at]energynomics.ro and ask for an invitation!