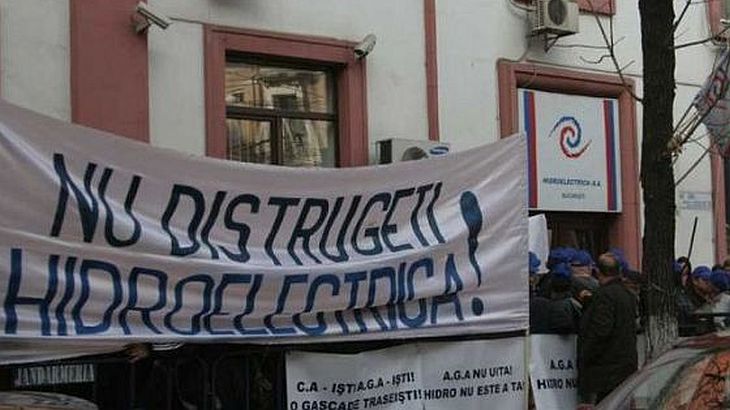 The president of the Negotiation Commission of the Labour Contract (CCM) from Hidroelectrica, Remus Borza, stated on Friday, that an agreement was reached together with the trade unions in terms of the new labour contract for 2014, reports Agerpres. According to Remus Borza, the wages of the employees from Hidroelectrica will be cut and some bonuses will be diminished, so that the company will gain a surplus of 23 million euro.

Remus Borza says the the average wage of an employee who is working for the most important electrical energy producer from the country, is currently 4.600 lei the gross wage, on the decrease from 5.200 lei as it was in June 2012, when the company entered into insolvency. Borza stated that the number of the employees shall be continually on the decrease but only through retirements , with the option of making additional amendments, if it is considered necessary, in the diagram concerning the TESA staff (the staff from the Technical, Economic and Social Administrative Departments ).

Wages, bonuses and an establishment plan on the decrease

“[…] the new labour contract is more bearable and stipulates a reduction of the budgetary expenditures by 23 million euro compared to 2012. These costs reductions come from the reduction of the staff (from 5.239 in 2012, to 4.244 at present), but also from the elimination of some benefits and bonuses. Over 30 employees will retire by the end of the year, a fact that will make the number of employees to count 4.200 until December 31, 2013. More than 1000 people left Hidroelectrica over the past 18 months within TESA staff”, stated Remus Borza cited by Agerpres.

Remus Borza stated at the same time that, “58 benefits are stipulated in the new contract, compared to 70 as there are included in the current contract. The new labour contract also stipulated a decrease by 600 lei, of the average wage per employee. The average wage per employee is currently 4.600 lei, the gross wage, to which the food vouchers are added. Amendments have been made in terms of the number of salaries paid in the event of layoffs”.

Maximum 24 compensatory wages will be paid

Amendments have already been made in terms of the number of the compensatory wages paid at the layoff, as well as in case of the reduction of technical staff for each shift. “The current labour contract stipulates that the number of wages that can be paid in the event of a layoff is included between 12 and 48, while, according to the new labour contract, only 7 to 24 wages will be paid. We also succeeded to intervene in terms of the decrease of the technical exploitation normative from 5,6 to 5,2 people per shift”, highlighted Remus Borza.

The Hidrosind trade union contested and criticized the appointment of Remus Borza at the head of the commission for the negotiation of the new labour contract, and the meeting for the resolution of this matter has been blocked by private investors, according to the press releases from Hidrosind. The  Hidroelectrica company will select  in a little while, a new intermediary for the stock exchange listing, after the Government rose the share package that he will provide the investors from 10% to 15%, and the companies that are interested will be able to submit tenders by January 20, 2014, the date of their opening.

Record profit for Hidroelectrica in 2013

Hidroelectrica will record this year a profit of over 900 million lei, the equivalent of the entire gain achieved over the past 11 years, stated the former president of the Supervisory Board (CS) of the state company. Remus Borza stated on Friday, that this reality comes from the difference between “the management that favoured certain people and the professional management”.

“The state will become a good manager the moment it appoints professional managers in the state companies”, stated Remus Borza, speaking for the last time as representative of Hidroelectrica. Remus Borza was the judicial administrator of Hidroelectrica and guided the company through insolvency for a year, holding only temporarily the position of president of the CS of the state company.

Hidroelectrica has a new CS starting from December, led by George Cristodorescu, former deputy manager within E.ON Romania, while Remus Borza didn’t put in for any position.

The company completed the first semester with a profit of 481 million lei (109.5 million euro), from losses of 202 million lei in a similar period from 2012, the gain being with 47 million lei higher than the budgetary level for the entire year. During the first semester, the businesses of Hidroelectrica totalized 1.68 billion lei (382.6 million euro), on the increase by 33.4%, from the level of 1.26 billion lei recorded in the first six months from 2012. The share capital of Hidroelectrica is owned by the state (80.05% of the shares) and the Property Fund (19.95%).

“The energy supply for the population will determine losses for Hidrolectrica of 30 million euro”, Remus Borza tackled on Friday the decision of the energy regulator  (ANRE) to provide the domestic consumers in 2014 only with energy produced by Hidroelectrica and Nuclearelectrica. He says that this decision will cost Hidrolectrica 30 million euros, because “Hidroelectrica has a production cost of 160 lei/MWh, but ANRE will recognize in the tariffs only 114 lei”.

Additional costs of 40 million euros brought by the introduction of the tax of 1.5%for the special constructions will be added to these losses, and the tax for the processed water means costs of 80 million euros per year. We remind the fact that ANRE decided that   the population should be provided with energy on the regulated market produced only by Nuclearelectrica and Hidroelectrica in order to keep the prices as low as possible on this sector. The expensive producers such as the steam power plants and the producers of renewable energy will not supply energy on the regulated market dedicated to the domestic consumers.

previousOil Terminal has a new Board, formed by an exchange specialist, engineers and economists
nextRussia offers 15 billion USD to Ukraine for financing its debt, including natural gas payments