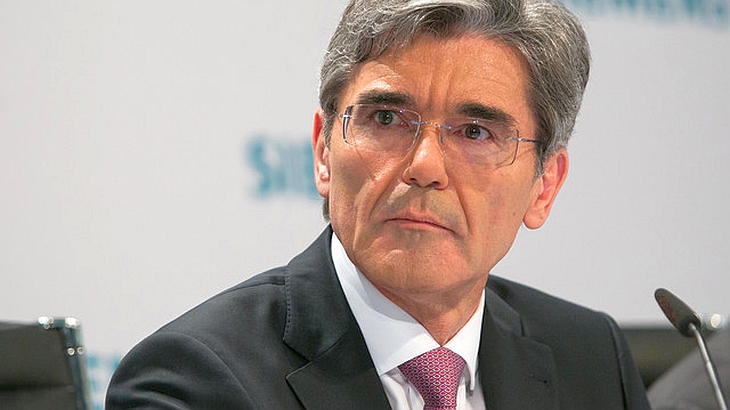 German engineering giant Siemens unveiled a long-awaited restructuring in a drive to catch up with more profitable competitors and said it would not be forced into a bidding war with GE for the energy assets of French rival Alstom.

The Munich-based firm’s Chief Executive Joe Kaeser has been working on the new strategy since taking power last summer following a boardroom coup that pushed out his predecessor Peter Loescher after a series of profit warnings.

Ahead of Kaeser’s presentation at the firm’s historic “Siemensstadt” site in Berlin, the company posted weaker-than-expected earnings for its fiscal second quarter, hit by charges in its energy business, and announced a series of smaller deals.

Siemens said it was buying energy assets from Rolls-Royce for 950 million euros ($1.32 billion) and transferring a majority stake in its Austrian metals business to Japan’s Mitsubishi Heavy Industries for undisclosed terms, according to Reuters.

As part of the overhaul, dubbed “Vision 2020” the company is taking out a layer of management by cutting back to nine core divisions, publicly listing its hearing aids business and separating out management of its healthcare business, a move several analysts said could be a first step towards a spin-off.

Asked about the future of healthcare, Kaeser made clear a spin-off was not on the near-term agenda, but suggested capital markets could be tapped in the future if big acquisitions were required.

The steps are aimed at strengthening Siemens’ focus on electrification, automation and digitalisation — processes to help industrial companies produce more efficiently. Taken together, they are expected to deliver productivity gains of 1 billion euros per year from the end of fiscal 2016.

The revamp comes as Siemens mulls a formal offer for the energy business of French rival Alstom, which is already the target of a bid from U.S. giant General Electric.

The French government views the GE bid with skepticism and has encouraged Siemens to enter the race despite lingering resentments between the European rivals over the German firm’s attempt to snap up Alstom assets a decade ago when the French group was forced to accept a state bailout.

Kaeser said he had discussed a possible combination with German Chancellor Angela Merkel, whose government has sent positive signals about it, and would not be considering an offer for the Alstom business unless he was serious.

But he made clear that a decision to bid would “not be forced on us” and said Siemens, which has been given four weeks to study Alstom’s finances before committing, would insist on full control of any assets it purchased — perhaps a reference to France’s desire for job guarantees.

Kaeser also expressed regret for referring to the crisis in Ukraine as “short-term turbulences” when he paid a controversial visit to Russian President Vladimir Putin in late March.

“The situation has escalated and I am very concerned about developments,” he said. Siemens has a partnership with the Russian railway monopoly, supplying high-speed trains.