Rompetrol Rafinare – 48% turnover growth, due to the sales increase 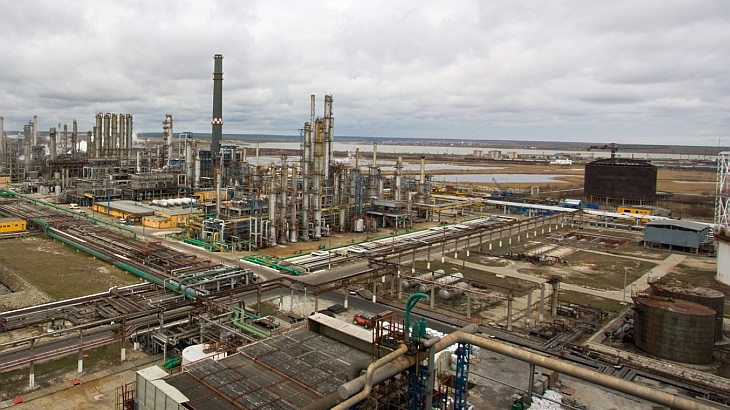 During the first quarter of the year, the consolidated turnover of Rompetrol Rafinare, a member company of KMG International, was USD 1.3 billion, 48% higher compared to the same period of 2013, and its operating result was USD 9.3 million, compared to a negative value of USD 120,000.

„The company’s consolidated financial results have been positively influenced by the increase in the quantities produced and sold, compared to the same period of last year, and negatively influenced by the evolution of international quotations for crude oil and oil products. Due to a 8% drop for gasoline and 5% for Diesel oil in Q1 2014, the crude oil dropped by 4%, the average quotations being above USD 108/bblfor the Brent-typecrude oil and approx. USD 107.5/bblfor the Urals-type,” shows a company release.

The investments made by KMG Internaționaland its sole shareholder – KazMunayGas, have enabled Petromidia refinery to reach, during the period comprised between January and March 2014, record levels of production, energy efficiency and white product outputs (gasoline and Diesel oil). Thus, the average quantity processed in Q1 was, in winter conditions, 13,000 tons/day, i.e. the highest since its establishment (1979), and the output reached for gasoline and Diesel oil was above 86%, exceeding the level of 2013 – 85.6% – which was the highest in the history of the refinery.

Also, the drop in the operating costs, paralleled by an increase in the mechanical and operational availability, have led to an improvement of the Energy Efficiency Index, which was 101 points, i.e. the best quarterly level obtained by the refinery so far. In 2013, the record level of EEI was 104 points.

Investments to exceed USD 35 million in 2014

For this year, the scheduled investments are estimated to exceed USD 35 million, mainly for continuing usual maintenance, operational support for improving the technological conditions and maximize returns from processing crude oil. Petromidia covers 43% of Romania’s refining capacity, has a capacity of over 5 milion tones/year and total investment made by KMG International and KazMunayGas for this platform amounts to over USD 1.3 billion.

Rompetrol Rafinare has remained an important taxpayer, contributing to Romania’s state budgetwith more than USD 319.6 million during the first quarter of 2014. In 2013, its contribution exceeded USD 1.4 billion.

Rompetrol Rafinare’s turnover reached USD 1.21 billion during the 1st quarter of 2014, i.e. 56% higher compared to the same period of 2013, being influenced by the sale of higher quantities of oil products, despite the drop in their international quotations.

The high sales level was due to the constant increase in the production of Petromidia refinery. During the 1st quarter of 2014, the refinery’s total production of raw material was 1.18 million tons, i.e. 87% higher compared to the same period of last year, when the processed quantity was 0.63 million tons, due to the general overhaul scheduled between March and April 2013, for the execution of technological works.

The petrochemical products sales increased by 20% in Q1 2014, compared to the same period of last year.

The plants existing on Petromidia and Vega industrial platforms are operated in accordance with the highest performance standards, and also in compliance with the environmental protection commitments.

Although international quotations (FOB Med Italy) dropped, on the average, by 8% for gasoline and by 5% for Diesel oil, due to a 1% drop in the RON/USD exchange rate, during the 1st quarter of 2014 compared to the same period of last year, the financial result of the distribution segment was positively influenced, mainly by the optimization of the sales channels and cost reduction program.

At the end of March 2014, Rompetrol Downstream’s distribution segment was comprised of more than 750 sale points, including the network of own stations, partner stations and mobile stations.