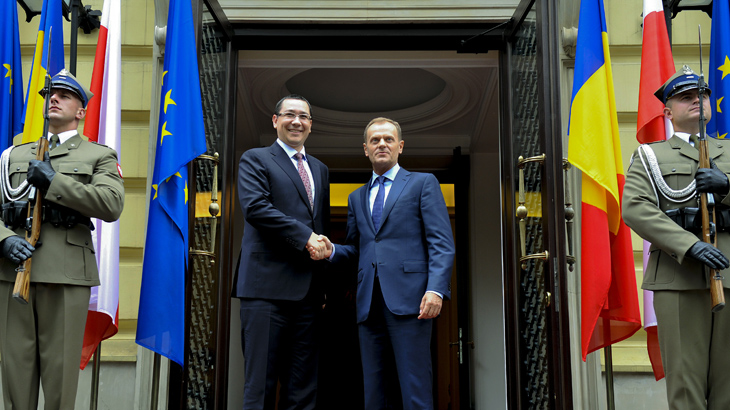 Romania has the benefit of having a balanced energy mix, and the perspectives for development of an enlarged pool of both domestic and imported gas supplies are good. The result of these two factors is that Romania doesn’t have a high energy dependency issue to respond to. For example, just recently the Chairman of National Agency for the Regulation in the Energy Sector said that for the 2014 winter the underground storages will be filled with 90% internal gas.

Looking more closely into the regional context, the problems at hand can be resolved with political will in just a few years from now. Their number is small, and their complexity can be overcome. In fact, in its region Romania is the one country with the smallest problems in relation to security of supply. It even has the potential to become a net gas exporter. A recent decision was taken, and exports are starting to appear in the official book-keeping, but their form is virtual for now.

In Romania the progress for regional integration is difficult to accomplish

However, regional integration of the local market has a long way to go, and for now it only does baby-steps. A series of factors stand in its way, and some of these factors include a lack in genuine competition on the internal gas market, inefficient management of several state-owned energy companies, a weak organization of the wholesale market, or the low external trade. The progress in eliminating all these obstacles is slow thus far, and this ultimately boils down to a lack of genuine political and business commitment in developing a transparent and competitive gas market. Daily news in the national and local media of law enforcement agencies actions in this sector show that as long as vested interests prevail, state monopoly is tempted to feed corruption and rent seeking rather than entrepreneurship.

Moreover, the present national energy policy is a strongly introverted one, and plans to create one more up-to-date are under way. The Delegate Minister for Energy, Constantin Niță, made a bold move. He announced that he will trust a private company to create the National Energy Strategy on the basis of clear specifications. In this way he hopes that the political grasp on the energy sector will start to wane. In the current strategy framework the decision making seems to be decoupled from that on the EU levels, and all these shortcomings isolate the Romanian gas market and quantify in amounts of lost money and geopolitical influence.

Pressure from international organizations accelerate liberalization of the energy market

Romania has the advantage of a favorable geographic location. Combine this with proven and potential gas resources (conventional and unconventional), with the existing transmission infrastructure and storage facilities, infer with potential building of gas liquefaction plant, expansion of underground storages and the revival of AGRI or some other regional project, and we have a good image as to why the Romanian gas market could become a significant part of the future European internal energy market.

But much needs to be done in terms of market liberalization and regional integration and competition. The pressure applied on energy sector reforms as a condition of the stand-by agreement with the IMF and EU has already brought partial successes, and the political discourse of national leaders and decision-makers shows that such conditionality with updated targets will continue. One of the main pillars of Romania’s energy security is the integration of the region’s gas markets as well as diversified import supplies. Since regional integration is hampered on the Romanian side by a series of domestic operational flaws, solving these will be in the interest of Romania, its citizens, and in the interest of companies operating on the national market, be it private or public.

Romania and Poland could share their experiences through the Strategic Partnership

In this context, the Polish Institute for International Affairs recently issued a policy bulletin stating that Romania and Poland should try to use more the Strategic Romania-Poland Partnership, signed in 2009, on its energy dimension. In a final analysis, the two countries have similar experiences regarding the transition from a planned and centralized economy to a market economy. Regarding their need for increased energy safety and security, the experts came with some recommendations for public policies and market measures in energy sector.

In their opinion, a bilateral framework for best practice transfer is highly recommendable. This would produce the most results at the company level, but institutional initiatives are necessary to give the first impulse. Poland could share its experience in LNG terminal construction and shale gas development, as in both areas Poland is at a far more advanced stage than Romania. The new private equity- style state-run infrastructure investment fund set up by the Treasury Ministry could also be a solution that Romania should discuss. In both these countries debates on draft legislation on new hydrocarbons are underway, and the need to share principle should be put in place. On the other hand, Romania has more than a century-long tradition of gas production, and its expertise with geological, technical and infrastructure issues should be shared more with its polish counterpart.

A further platform for cooperation between these two countries could be the Vișegrad Group. The polish paper notes that Romania is already occasionally involved in the V4+ format on energy issues, particularly in the development of the North-South Gas Corridor. The experts go even further, saying that Romania could also be engaged in the regular political and expert-level consultations of the V4 on EU energy initiatives, such as the TEN-E regulation, the Connecting Europe Facility or developing a European approach to shale gas.

Just recently Poland and the UK announced that they want a EU debate on shale gas. Deputy Environment Minister in Poland said that “the British are as sure as the Poles are that shale reserves should be used in a country’s energy mix.”. He added that the debate in the EU has shifted in favor of shale gas opponents, and they dominate the conversation and frame the discussions. Romania could join this initiative, as the country with the 3rd largest shale gas reserves in Europe, accordind to some estimates.