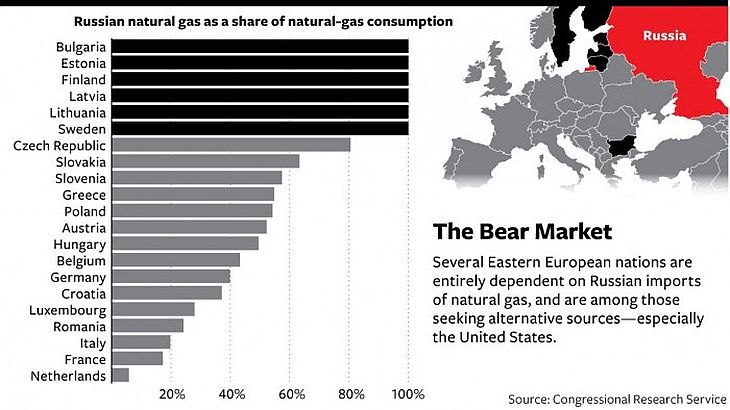 EU nations are forming a coalition with the U.S. energy industry to lobby for more natural-gas exports.

Citing economic and national security woes, more than a dozen European nations are ramping up pressure on Washington to open wider its federally restricted spigot of natural-gas exports, according to nationaljournal.com (also photo).

The countries, which primarily include Eastern European nations heavily dependent upon Russia for their energy supplies, are working with a Washington-based government-affairs firm to launch a lobbying coalition in the next month with American energy companies.

The coalition, whose name will be LNG Allies, will lobby Washington on allowing these countries easier access to natural gas from the United States, where supplies have ballooned in recent years and domestic prices have plummeted compared with the rest of the world. Right now, federal law significantly restricts U.S. companies from exporting natural gas to countries that are not free-trade partners with United States, which includes Europe.

“These countries are all still very heavily dependent upon Russia, and they’re excited about getting into the LNG [liquefied natural gas] marketplace, and are looking for not only U.S. gas, but good, solid business relationships,” said the coalition’s organizer, who works for the firm launching the coalition.

This source, who would speak only on the condition of anonymity since the coalition has not yet launched, said countries that are likely to be members of the group include Austria, the Czech Republic, Estonia, Finland, Latvia, Lithuania, Poland, Romania, and the Slovak Republic. These nine countries sent representatives to a meeting last month at the Lithuanian Embassy in Washington. Other potential members include Croatia, Hungary, Slovenia, Sweden, and Greece.

When reached for comment about its participation in the coalition, an official at the Czech Republic Embassy said no final decision has been made. “We want to learn more about what this will entail, what this will mean and how this will work,” said Martin Pizinger, political and economic officer at the embassy.

Simonas Šatūnas, deputy chief of mission and minister counsellor at the Lithuanian Embassy, said the country was likely to join. “We are very strongly considering and probably will join,” Šatūnas said.

The government-affairs source said more logistics and details must still be worked out before some countries confirm their involvement.

“We are fairly close to announcing something publicly about the coalition,” the source said. “It’s a little tricky diplomatically to put together an organization that can allow embassies and their gas companies to work with our industry together in a legal way that doesn’t generate immense headaches and paperwork.”

Two U.S. trade associations, America’s Natural Gas Alliance and the American Petroleum Institute, have not yet committed to the effort but are currently discussing it. “We certainly are interested in Eastern European markets and we are considering the best way to work with those countries to bring them America’s clean and abundant natural gas, but we have not yet reached a formal agreement to work with one group or another in that endeavor,” according to ANGA spokesman Dan Whitten.

The impetus behind this coalition has been growing over the last year as European countries have been meeting more and more with top officials in Congress and within the administration to explain why Europe wants American gas so badly.

“We’ve had so many country representatives come into the office, pleading with us to step up our efforts to export LNG,” said Rep. Ed Whitfield, chairman of the House Energy and Commerce Energy and Power Subcommittee. “The reason why is because the Russians have them over the barrel and they’re able to extract really high prices from them.”

In public events throughout Washington in recent months and in multiple interviews for this story, officials representing European countries stressed both the national security and economic reasons why they want to import U.S. natural gas.

One Greek member of the European Union Parliament, Niki Tzavela, went so far as to say that cheap energy trumps financial aid through the International Monetary Fund.

“It’s better if you give us cheap energy than sending money through the IMF,” Tzavela said. Cheap natural gas would more quickly help the economy than financial aid, she said. Over the past four years, Greece has received more than $235 billion worth of international aid through the IMF, of which the U.S. is the biggest shareholder, according to the IMF. The current gas price in Greece, which is a little more than 50 percent dependent upon Russian gas, is $17 per million British thermal units. Tzavela says that if the United States made its gas available to Europe, Greece’s gas price would be $7.50, even accounting for transportation and infrastructure costs.

“The endgame for us is to break free from the manipulation of gas prices according to the crude-oil index,” said Tzavela, whose party (the Europe of Freedom and Democracy group) is conservative by American standards. “This is what Gazprom has put on Europe.”

A spokesperson Gazprom, Russia’s state-owned oil and natural-gas company, did not address the coalition but instead issued a broader statement.

“Gazprom is a reliable supplier of natural gas, making every effort to fulfill of its contractual obligations,” Gazprom spokeswoman Olga Moreva said in an e-mail. “This provides clarity and predictability of relations with both European consumers and with our closest neighbors in the years ahead.”

Moreva indicated that importing natural gas would not necessarily lower prices for European nations, and could even increase prices. “Investment decisions on constructing LNG terminals are taken on the basis of economic calculations and feasibility studies, but not on the belief that their presence will reduce gas prices for domestic consumers. In any case, construction of LNG terminals should be paid off and, therefore, someone has to pay for it. In this case it is the end consumer.”

Washington officials Tzavela has met with include House Energy and Commerce Committee Chairman Fred Upton, R-Mich., and Energy Department Deputy Secretary Daniel Poneman. In conversations with these Washington officials and others, Europe faces challenges rooted in both policy and politics.

The Energy Department has approved five applications to export natural gas to countries that are not free-trade partners with the U.S., but very little if any of the gas is going to European countries (most are going to Asia, where companies can fetch higher prices). More than 20 applications are pending before DOE.

The law that restricts natural-gas exports to countries that are not free-trade partners with the U.S., which dates back to 1938, requires companies seeking to export to these countries to go through a lengthy—and increasingly political—regulatory review process that must determine whether such exports would be in the country’s best interest. The Energy Department gives a more automatic approval to natural-gas exports going to countries that are free-trade partners with the U.S.

To that end, the LNG Allies coalition will pursue a two-pronged approach to change this current system. Countries and companies will lobby to ensure natural-gas exports are part of a large free-trade agreement, called the Transatlantic Trade and Investment Partnership, which the Obama administration and the European Union began negotiating last summer.

The coalition will also lobby Congress to pass bipartisan legislation introduced in both chambers that would expedite natural-gas exports to countries that are members of the North Atlantic Treaty Organization, which includes many of the European countries most seeking America’s gas.

Achieving either or both of these policy objectives will require overcoming tricky political hurdles, including the concern that lawmakers should first and foremost ensure domestic energy prices remain cheap. Some chemical companies, which use natural gas in their manufacturing processes and benefit from low prices, are concerned that if the country exports too much natural gas, the United States could lose its competitive advantage.

“I hope no one would suggest that our overseas allies should be placed higher in the prioritization queue than the American consumer,” said Kevin Kolevar, vice president of government affairs and public policy at Dow Chemical.

Tzavela, the member of the E.U. Parliament, said she sympathized with this perspective. “But on the other hand, in the long run, if Europe doesn’t have the consuming economy, American products will lose as well because we will keep reducing our consumption of those products,” Tzavela said.

Rep. John Shimkus, R-Ill., who cochairs the House Baltic Caucus and whose family heritage is Lithuanian, echoed this sentiment.

“These countries do everything we ask them on the war on terror, troops in Afghanistan, troops in Iraq. They’re all for us,” Shimkus said of European countries. “They would drop everything to help us.”

Indeed, that’s the message European officials are trying to send.

“We stand for each other on military fronts. Lithuania was the smallest country to have its forces in Afghanistan. We have our special forces still fighting. They will continue fighting with you in south Afghanistan,” said Zygimantas Pavilionis, Lithuania’s ambassador to the U.S. and Mexico, at a forum last fall hosted by the House Energy and Commerce Committee. “But, we have to fight for each other in the area of new challenges. If we have cuts of supplies, if our security is under threat, we have to stand for each other. So, LNG is something that would really benefit the common security of the whole Trans-Atlantic family.”

The forum, which was relatively sparsely attended, had a clear message, which Pavilionis summed up in his opening remarks.

“We need your gas, gentlemen, to consolidate our independence,” Pavilionis said. “We want to buy your gas.”