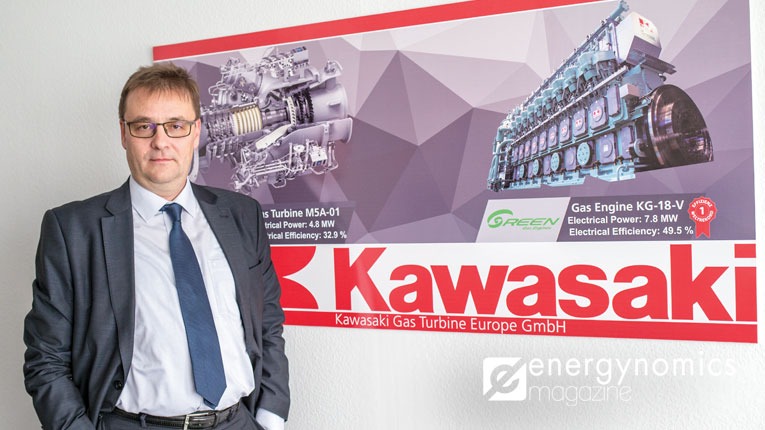 The postponement of the decisions regarding the realization of the large cogeneration projects submitted for financing through the Large Infrastructure Operational Program (POIM) harms the Romanian energy and industrial market, an impact that cannot be offset by no means by the possible access to new European funds. For the companies active in this sector this situation means lost time and money, with no objective justification, says Cristian Athanasovici, Business Development Manager at Kawasaki Gas Turbine Europe. He reviewed for us the prospects for the use of natural gas, as allowed by the high-performance equipment and technical solutions offered by the Japanese company.

What is the market on which Kawasaki Gas Turbines operates in Romania?

Kawasaki Gas Turbine Europe GmbH company operates in Romania promoting energy production solutions on three major segments. The first is the industry, which needs not only electricity and steam but also hot and cold water. We are talking about many sectors, mainly the chemical industry, the food industry, refineries, paper industry and rubber industry. The second category is the centralized district heating, i.e. the thermal energy for the cities, and the third category consists of producers of electricity from renewable sources or users of conventional sources, who can use Kawasaki equipment to produce electricity to balance their own generation capacities or for providing system services.

For a long time, natural gas has been under discussion at the European level, with uncertain prospects. Now, it seems that things have been clarified – natural gas remains a transitional solution for Romania. From this perspective, have the discussions you have with potential partners been simplified?

Yes, natural gas is accepted at the European level, but European funding mechanisms are mainly directed at the production of electricity from renewable sources. Natural gas is the fossil fuel with the lowest emissions with an impact on the environment, but it remains difficult to finance otherwise than in combination with hydrogen.

We must start from the fact that the Romanian industry was built and operates today mainly based on natural gas, which also contributes for the generation of electricity, but also thermal energy and industrial steam. All major industries – chemistry, petrochemicals, refining, the automotive industry – are based on natural gas. Let’s not forget that the food industry also needs electricity, steam, and carbon dioxide, too! Carbon dioxide is needed in the production of beer and carbonated beverages, so solutions for self-production of energy can be accompanied by CO2 capture solutions for the CO2 to be reused in the technological process.

However, in the Romanian industry, the projects in which Kawasaki equipment would find its place are difficult to finance and, for this reason, the option of financing through the Large Infrastructure Operational Program (POIM) axis 6.4 for high-efficiency cogeneration, represents a chance but greatly diminished by the delay in implementing this Program. At the level of the Ministry of European Funds, the submitted projects have not been analyzed, or the evaluation drags on, so there are no decisions on whether the submitted projects will be financed or not. Even with decisions announced very quickly, the time left for implementation is very short, because the funds must be spent by the end of 2023, which makes the pressure very high for all involved, namely applicants, equipment suppliers, general contractors etc.

In addition, market conditions have changed and they are substantially changing from the time when the projects were designed and submitted for funding, from energy and CO2 certificates costs to the decline or advance of the beneficiary’s energy needs.

What is the future of projects submitted for funding through POIM 6.4, without an answer after so many years? Can they be moved to other financing axes?

Yes, but for this, we need more clarity on these other axes, such as the Modernization Fund or the National Recovery and Resilience Plan. Unfortunately, we do not know enough details about any of these funding lines, there are no funding guidelines, there are no project evaluation criteria.

Then the projects need to be redone, updated with data from today and updated forecasts; you cannot apply for funding in 2021-2022 based on energy consumption from 2018 or earlier. To update the solutions we are talking about means new costs, in addition to those already paid and for which there is no real prospect of recovery.

It is, however, very clear that there will be significant changes in the evaluation criteria compared to when the POIM was conceived. Therefore, the solutions proposed from a technical point of view, but also economically, of profitability, will target other parameters compared to those considered years ago.

Beyond European money, is there interest from large industrial players in high-efficiency cogeneration projects?

Kawasaki solutions address medium and high power consumers, between 2 MWe and 34 MWe for gas turbines, equipment that is suitable in industrial sectors where electricity and steam are needed. There are very few companies that have the financial power for such projects, and their main interest is to develop their technology and production capacity to strengthen their market position. Energy is a secondary issue for them.

There is money in the market for such projects, but there is also the reluctance to using own funds, and even less to using bank loans, when there is the potential for much cheaper or even free financing.

Turning to the centralized heating segment, we have a new law, for a few weeks now. Do you anticipate a significant impact of this new piece of legislation?

The main question is whether it will be applied. What will each territorial administrative unit (UAT) do to ensure this type of utility? Declaratively everyone is interested, but the practical actions are almost non-existent.

In my opinion, the transmission and distribution networks for thermal energy should be the responsibility of the UAT, and for production, we should encourage the emergence of as many private agents as possible. However, this implies a series of responsibilities on the part of the territorial administrative unit, which must invest in networks and maintain them to appropriate standards and with very efficient management in the operation of the networks. Manufacturers need to know what quantities of heat are needed and have a guarantee that their production will be purchased. It is the responsibility of the UAT to ensure the purchase of thermal energy, by prohibiting disconnection and/or encouraging and stimulating reconnection.

Based on historical data and urban development forecasts, UAT representatives should be able to anticipate within a reasonable range the level of thermal energy consumption. Taking into account the already mandatory renewable energies, there are technical and commercial formulas to respond to an anticipated consumption of thermal energy, even with significant seasonal variations.

Are there already enough projects in which natural gas and renewable solutions work together in terms of superior efficiency and economic performance?

Talking about yields is one thing, and talking about reducing the impact on the environment is another. Today the emphasis is especially on avoiding pollution and that is why we choose technologies that use secondary energy resources or renewable energy resources.

Kawasaki has technologies that can use both natural gas and hydrogen simultaneously. But for large-scale use, we are talking about the future. For the moment we have to think about pilot projects, rather small, we are not talking about investments of hundreds and hundreds of millions of euros. We are talking about projects that need to prove their efficiency both from a technical, economic and environmental point of view.

Probably what we should keep in mind would be 2-3 MWe cogeneration plants for district heating, or the production of electricity and steam in the chemical industry where hydrogen is a by-product of technological processes, where to combine hydrogen with natural gas. Electricity can easily enter the system, without additional investment in networks, and thermal energy would be used by the population, perhaps in a new residential neighborhood. From the point of view of the steam produced on the chemical platforms, it can be used in the technological processes of the production of different chemical compounds.

How big would it be, on what surface could such a plant be placed?

Such hydrogen-based solutions have even greater potential if they include some form of cooperation with industrial units near urban areas. Ideally, there should be a chemical plant that generates hydrogen as a by-product of a brine electrolysis plant, for example. The hydrogen can be used in a cogeneration plant to produce the heat needed by the nearby city.

Cities that are close to a water source can opt for solutions to produce green hydrogen. We can also have grey hydrogen, that is, accompanied by the emission, capture and storage of carbon dioxide. There are mature technologies for such a thing, in my opinion, more advanced than those relying on the water as a primary resource. For Romania, coal gasification can be a better solution, because a form of reconversion of the mining industry would be welcome.

I understand that hydrogen is a response that we expect only in 4-5 years. For now, in the near future, what options do we have to bring together natural gas and renewable energy?

I see an attractive potential for such a mixture, based on natural and renewable gases, especially in sectors where there is thermal energy consumption at a relatively low thermal potential, i.e. a thermal agent at a temperature of up to 100-110 degrees Celsius.

For district heating, we can use natural gas for the winter, with solar panels, for the production of hot water, in the summer, and/or heat pumps. We are talking about small projects that, conceived in a concept of distributed production, can sum up to significant amounts of energy. Another mixed option is biomass and/or waste, plus solar and photovoltaic panels, plus heat pumps.

In the industrial sector, similar solutions can be considered, for example in beer production, where we have waste from which biogas can be produced so that it can be used together with natural gas.

Also, in some regions of Romania, we have a geothermal potential that can be integrated with the use of natural gas.

In all these examples, we use the fact that natural gas comes with very good rates of utilization and is both a balancing and a backup solution. Kawasaki solutions are strongly complementary to all the solutions for producing energy from renewable sources.

In order to support the implementation of new technologies for the production of electricity and heat, it is essential for Romania to adopt a new financial support scheme for cogeneration. Especially in the district heating sector, it will be difficult to develop relevant projects without it. I would be happy for this scheme to be designed to stimulate investment, not to cover operating costs, highly exaggerated most of the time. Also, such a scheme should be applied not over a long period of more than 10 years, but over a period based on the number of hours of operation of technology, i.e. closer to the way commercial projects are built, over 5 -7 years, maybe.

This interview firstly appeared in the printed edition of Energynomics Magazine, issued in September 2021.