KMG and Rompetrol: 32 mln. tons of crude through the Black Sea in 10 years 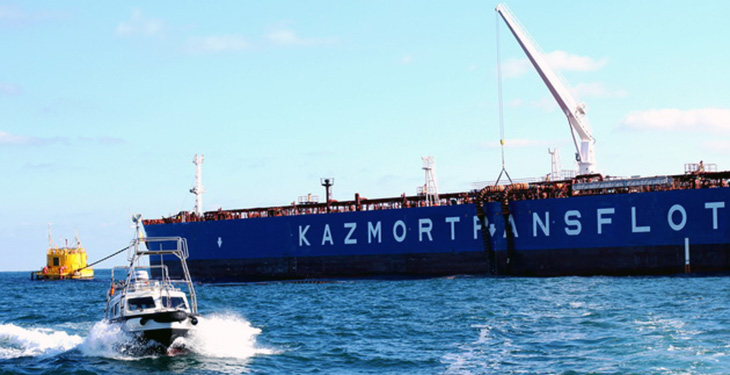 “In 10 years since the since the start of the operations carried out in the Black Sea, the records have increased yearly. In 2016, the total quantity transferred through all the terminals operated by Midia Marine Terminal was of over 11 million tonnes of crude and petroleum products. The operational records of the marine terminal represent a result of the investments carried out by KMG International and its sole shareholder, the National Oil and Gas Company of Kazakhstan “KazMunayGas”, in Romania”, stated Ioan Taus, general manager of Midia Marine Terminal.

Located in Midia port, the terminal is operated by Midia Marine Terminal (MMT), company that coordinates the shipping activities in Midia harbor and in Petromidia and Vega refineries, operated by the Group. Through the berths managed by the company, the frequency registered is of 550 vessels per year and the transfer of oil products, LPG, ethylene & raw materials is more than 2 mill tons per year, imported and exported. Through the marine terminal, the transfer of crude reaches 5 mill tons per year, quantity operated by 50 tankers per year. More than 350 vessels were operated since the start up.

The transfer via Petromidia and Vega refineries loading/unloading ramps exceed 3.5 million tons per year of fuel products & LPG, with 60.000 rail tanks operated and more than 35.000 truck tanks operated yearly. Refinery secondary truck logistics for Bitumen and Petrochemicals deliveries are also coordinated by MMT responsible, by assuring in time, means of transportations and quality services in order to keep or even extend the Polymer and Bitumen network clients. Almost 40% of the crude refined in Romania

In 10 years since the since the start of the operations carried out in the Black Sea, the records have increased yearly. In 2016, the total quantity transferred through all the terminals operated by Midia Marine Terminal was of over 11 million tonnes of crude and petroleum products.

The marine terminal operated by Midia Marine Terminal in the Black Sea ensures the transfer of crude oil to Petromidia refinery, approximatively 40% of the crude refined in Romania. With an estimated transfer capacity of 24 million tonnes per year, the oil terminal can receive ships up to 160,000 tdw. By operating the offshore marine terminal, the company decreased the distance by about 33 kilometers from the Constanta port route and allows for reductions of approx. USD 7 per tonne of crude oil supply costs. Thus, the investment of USD 100 million for the construction of the oil terminal was amortized only 5 years after its commissioning. In 2015, the system for transfer of crude through the oil terminal was replaced, as a result of the mandatory maintenance works which were carried out. The investments amounted USD 3.5 million.

Member of KMG International, Midia Marine Terminal was established in 2007, taking over the administration of the berths in Midia harbor from Rompetrol Logistics company, company that developed operation in this area since 2001. Midia Marine Terminal was established to build and operate the offshore oil terminal and operate the port oil terminals at Midia Port – Romania. The company has three main divisions, on shore oil & gas port terminals, offshore oil terminal & crude oil tank farm and Petromidia and Vega refineries Ramps.

In January 2009 the port terminals in berths 9A,B and C complete modernization was completed, due to an investments of some 31 mill USD, becoming the most modern and versatile oil & gas terminal in Black Sea in berths 1-4 and 9A,B C for maritime and river tankers. This terminal is also the only one cryogenic terminal in Black Sea. In October 2014 , Midia Marine Terminal was transformed into the logistics arm of KMGI in Romania, by adding to the team of specialists railway logistics personnel from Petromidia and Vega refineries.

The presence of KazMunayGas in the geographic arc connecting the Caspian Sea (Kazakhstan, Georgia) and the Black Sea (Ukraine, Moldova, Romania, Bulgaria) with Western Europe is ensured through the Midia Marine Terminal. The crude oil is transferred to Petromidia refinery, who functions in an integrated system with Vega Refinery and who is also the sole petrochemical producer in Romania. The finished products are delivered to the internal market and also to the countries in the Black Sea region.