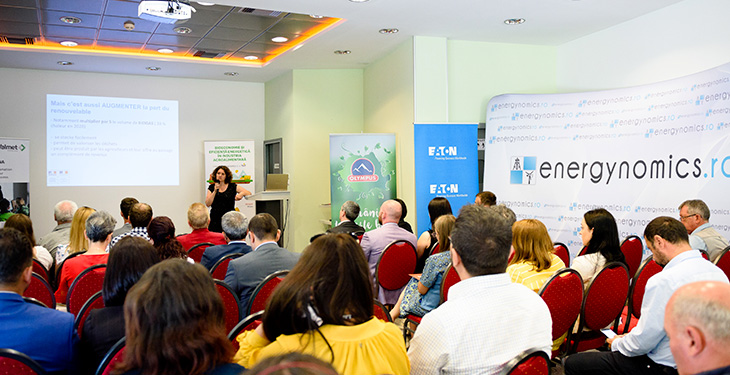 In Brasov, specialists in energy and agro-food industries started the series of seminars proposed by energynomics.ro and TMT PR under the “Bioeconomy – Energy Efficiency in Agro-Food Industry” concept. Five speakers animated the dialogue in the early part of the day, and then most of the participants visited the Olympus diary plant near the city. Next – Timisoara, on July 3rd, and Cluj-Napoca on November 6th!

The organizers’ representatives started by presenting the objectives of this initiative – informing and educating decision-makers in the agriculture and food industry in Romania, for a better understanding of the necessity and benefits of implementing energy audits, with examples of actions and technologies for increasing efficiency energy. 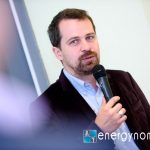 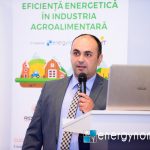 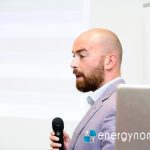 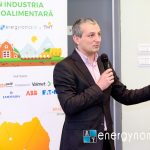 As a guest speaker, Ion Stan, the executive director of the Brasov County Department of Agriculture – DAJB, underlined that the Directorate promotes any new technology, although they are not so enthusiastically adopted in Romania. “We are always looking to support any initiative, especially in the technology area and we hope that economic agents will more and more apply new technologies in bioeconomy and energy efficiency. I remember that, when the European funds were first introduced, we did not know much about them, in the 2000s, but it turned out that they were beneficial and we have always been involved in projects, bringing information in front of the business circles”, said Ion Stan, adding that, such seminars would also be needed in the future in Brasov.

Marie Luce-Ghib, Counsellor for Agriculture at the French Embassy in Bucharest, presented the approach to bioeconomy in Hexagon, where it is seen as the best response to the climate change challenges. France and President Emmanuel Macron are the main supporters of the Paris Agreement, Marie Luce-Ghib reminded: “We draw attention to climate change at international level. In particular, we have set cross-cutting targets, which means energy efficiency, renewable energy and the cutting greenhouse gas emissions. This means multi-sectoral policies – in construction, transport, agriculture, the environment, as well as in the islands owned by France, for which we set the target of 100% renewable energy, there where the solar resources are abundant.”

Targets are very ambitious, said Marie Luce-Ghib, who also pointed out that, in addition to the other common targets, France intends to cover the demand for thermal energy with biogas (a share of 39%) by 2028, which will mean five times more than the current share for biogas. “This can also help agriculture. According to a study in Germany, 20% of the income in agriculture comes from biogas and waste recovery as well as from other renewable sources.”

France has already presented a strategy and an action plan for bio-resources, which are monitored annually. “Bio-products must be a reality in the market, to be asked for, and we as a state can support Romania in this respect,” Ghib said, exemplifying through some actions taken in France in intermediate crops, for innovation, to facilitate the penetration of bio-sourced products, as well as through public communication campaigns and prizes awarded to the best projects in the field.

The Control Point Group has projects implemented in the thermal and hydro area but also in other areas in the energy market. In Romania, Control Point has 25 employees and is a partner of Valmet, a provider of solutions for the energy market, especially in waste-to-energy, paper and pulp, biomass, biogas and automation.

“Control Point manufactures electrical installations from commissioning to maintenance, and our most recent segment is solar, where we operate as a photovoltaic integrator,” said Daniel Bertalan, Sales & Project Manager Control Point. The company can install photovoltaic systems on production halls or stores. In agriculture, Control Point collaborated with Vel Pitar Bread Factory and Seven Spice Mill in Braşov, but also with PetKus, supplier of silos technology.

Daniel Bertalan presented the design and execution services for power and automation as proposed by the Control Point team, but also some of the international waste-to-energy projects in the company’s portfolio.

Mihai Voronca, Executive Director of the Romanian Energy Efficiency Fund – FREE, shortly presented the history of the body. Set up in 2000, based on a World Bank grant, for crediting energy saving projects, the Fund had its first financing project in 2004, after which, up to now, 42 credit contracts of about 27 million dollars in total have followed. At first, the fund available for investments was 8 million dollars revolving, and FREE managed to reinvest almost four times the initial amount. The projects attracted co-financing form the banks (about 83 million dollars), and the final value of the supported projects was 357 million dollars, Voronca said.

The director of FREE also pointed out that the interest rate on the funds offered, without fees, is linked to a three months Libor, thus, the interest rate can drop to below 6.5% per year. The main advantage of co-financing energy efficiency projects through FREE is that, besides money, the fund provides technical expertise, which guarantees, according to Voronca, that “the project pays its credit”.

Eaton is a company specialized in energy management, and one of the global leading manufacturers of industrial and commercial components, said Cristian Trifan, Area Sales Manager Braşov, for Eaton Electric.

“Over time, Eaton has become a market leader mainly based on acquisitions, and it offering the most complete power portfolio, starting from power distribution systems, anti-fire, lighting and control systems,” Trifan said. He presented the product range of Eaton’s for energy efficiency, focusing on frequency converters, UPS systems and energy storage solutions to reduce power consumption.

In Romania, Eaton has 2,500 employees and three factories; two are located near Baia Mare and they produce control and protection devices, metallic garments and accessories. A third factory, located in Arad, produces safety lighting.

Cogeneration from biogas helps to capitalize on bio-waste

“We intently chose an agricultural area. The investment used German technology with fermentation tanks and automation using corn-silo for fermentation. The raw materials are used for producing biogas by anaerobic fermentation, the biogas is treated and sent to the cogeneration plant; it generates electricity which injected into the grid, as well as hot water and technological steam, sold or used for the technological process”, Bărdeanu explained. 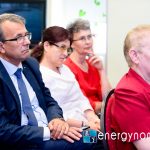 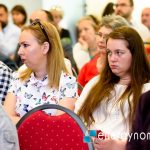 Technology keeps you ahead of the competition – Olympus

During a visit to the Olympus dairy plant, the participants at the seminar organized by energynomics.ro and TMT PR had the opportunity to discover, under the guidance of the company’s management, “the largest and most technologically advanced milk processing plant in South East Europe”. If you are not at the forefront of technological novelties, you risk discovering that you have missed opportunities and lost ground against competitors – this phrase was repeated on many occasions by Adrian Cornea, plant manager and also by Dimitris Kelas, general manager of Olympus Brasov.

The most visible and spectacular example of adopting new technologies is the set of palletizing robots on which the plant in Hălchiu, Braşov, counts on – “I do not know what we would have done without such robots,” say Olympus representatives. The chosen solution eliminates the need to have a team of 27 forklift trucks operators – an impossible task under the current labor market conditions in Romania.

The biogas plant built in 2017, with an investment of 4 million euros, comes under the same approach. “We did not think of doing a business in energy generation,” said Dimitris Kelas. “What we were about was a solution to protect the environment and save natural resources.” Biogas is produced from waste water and lactose resulting in production through a fermentation process in an anaerobic reactor. The plant has an average production capacity of 600 cubic meters (cm) biogas per hour and a storage capacity of 2,000 cm. Consumption of biogas produced this way reduced the natural gas needs of the Brasov plant by up to 60%; in addition, it contributes to the reduction of carbon dioxide emissions. 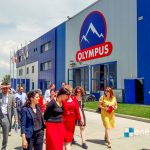 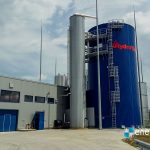 Based on the invitation from energynomics.ro or TMT PR, access to the seminar is open to all professionals in the Romanian economy: decision makers in agriculture and food industry in Romania, from public authorities and companies ‑ from start‑ups and SMEs to the largest enterprises, ESCOs companies, experts and professional organizations, accredited energy managers, academic environment. You are welcomed to write us at office [at] energynomics.ro and ask for an invitation!

previousRussian gas pipeline to Germany sows divisions in Europe and beyond
nextThe Ministry of European Funds has extended the deadline for cogeneration projects (axis 6.4 POIM) to year-end