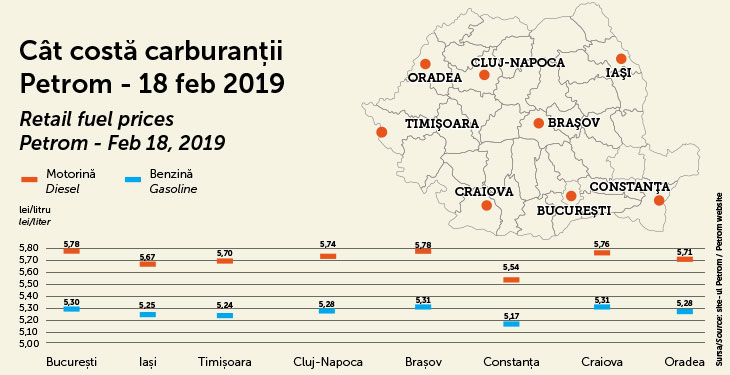 The price of diesel sold by Petrom climbed by more than 1% as against February 11th, in the sixth week of rising prices in 2019. Since January 7th, diesel prices increased by almost 7%, while the gasoline prices rose by almost 5%. In the past week, gasoline and diesel prices grew in all eight stations monitored by energynomics.ro; in each city the prices are now at the maximum of the year.

Constanta had the most significant diesel price advance in the last week – 1.09%. At 5.54 lei/liter, this is still the cheapest option among the monitored cities. The highest prices are recorded in Bucharest and Brașov (5.78 lei/liter).

In part, the car fuels prices have increased following the entry into force, on January 1st, of two normative acts: indexation of excises with the inflation rate, respectively the increase of the mandatory content of biofuels in gasoline and diesel. A much more important driver is the decline suffered by the Romanian currency; since the beginning of the year the leu lost more than 3% compared to the dollar, according to the NBR exchange rate (almost 0.13 lei).