Acasă » Uncategorized » Cristian Athanasovici, Kawasaki: Solutions on hydrogen should be carefully analyzed from a cost perspective

Cristian Athanasovici, Kawasaki: Solutions on hydrogen should be carefully analyzed from a cost perspective 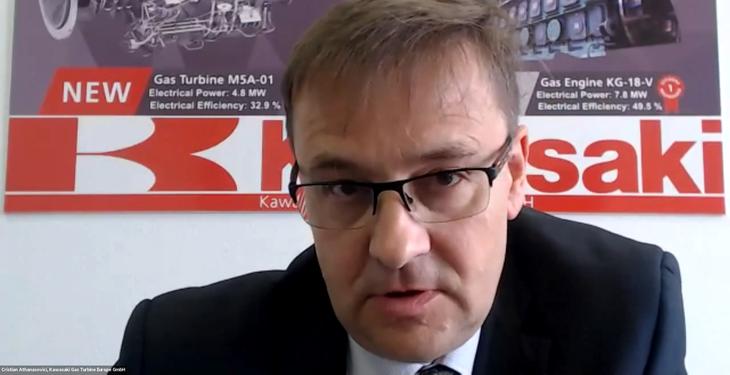 Besides so many diverse equipment it produces, Kawasaki is a producer of cogeneration solutions, started Cristian Athanasovici, Business Development Manager, Kawasaki Gas Turbines Europe, at the conference “Digitalization and Energy Efficiency – Cluj- Napoca”, organized by Energynomics.

“Kawasaki Gas Turbines Europe is a branch of the Japanese Kawasaki Heavy Industries, located in Germany. In Romania, we have a representative office responsible for the entire Southeast of Europe,” Athanasovici said.

“The European branch deals only with the gas turbines and internal combustion engines produced in Japan and assembled in Europe. They are natural gas based equipment, and because we are at a time when carbon emissions mean more and more pressure for our lives, Kawasaki attaches great importance to reducing the carbon footprint and, at the same time, increasing fuel burning efficiency in the equipment produced. Thus, Kawasaki equipment works very well in distributed energy production systems, and for some time now, precisely because of pollutant emissions and the EU’s goal of becoming neutral in this respect, we have developed equipment that burns hydrogen in a proportion of up to 100%, mixed with natural gas. We need to address the issue of mixing hydrogen with natural gas as carefully as possible, because hydrogen, at the moment, looks like an El Dorado: everyone seems to believe that it will solve the problem of pollutant emissions and the energy problem altogether. This is not true! We have to be patient, be very attentive to the proposed solutions and to the costs of these solutions”, Athanasovici also said.

The range of equipment and services from Kawasaki is based on gas turbines between 1,8 – 34 MWe and internal combustion engines of 5,2 and 7,8 MW – with a 51% efficiency – currently a very good solution for balancing renewable power generation. The company offers long-term deployment and maintenance solutions.