Chinese offensive: pledges of billions of euro, at 6.4% of Romanian GDP 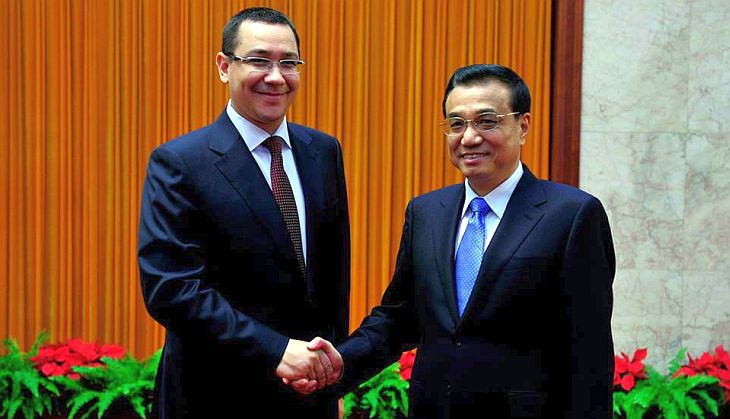 With currency reserves worth about 3.3 billion USD, out of which more than two thirds based on US denominated assets and a quarter in euro, China needs placements that will bring in above average yields. China Investment Corp. holds an extra portfolio of 200-400 billion USD for the state`s investments, besides the official reserves. It is, therefore, easy to explain why the 8.5-8.7 billion euro promised to Romania just for the energy sector are a drop in an ocean for the Chinese state. It is not clear, though, what and how much Romania has to reimburse and collateralize.

Who wouldn’t like to travel the 450 km from Bucharest to Cluj in just about an hour and a half? If the government head Victor Ponta`s promises signed this week with the Chinese prime minister, Li Keqiang and his delegation will prove real, the Chinese may build not only high-speed train rail in Romania, but also energy projects totaling 8.5-8.7 billion euro, or about 6.4 percent of this year’s estimated GDP of 135.5 billion euro. The projects are fairly ambitious, though it is not yet very clear if and in what extent should the Romanian state bring in or collateralize.

Besides the energy and infrastructure projects, Romania opened the Chinese meat and agriculture market, a huge potential for Romanian exports.

„Regarding the amount , I want to assure you that it is huge. Tonight, the workgroup of the two sides will discuss also the projects regarding the high speed train and in the infrastructure field, and all of these projects will exceed the sum initially-stated by contracts. I don’t want to mention a limit for the amount, as I wish it’ll be a surprise,” the Chinese prime minister said.

Nuclearelectrica signed with the president of China General Nuclear Power Corporation (CGN) a letter of intent regarding the project for Reactors 3 and 4, in Cernavoda, delayed up to now many times during the past years. The projects` value is of 6.5 billion euro and comprises doubling the 1,400 MW capacity of the first two reactors, functioning today in Cernavoda, which cover 20% of the national energy consumption, according to zf.ro. As the four reactors will function non-stop, a pump storage hydropower plant that will act as a warehouse of energy is needed. The project manager of  Tarniţa-Lăpuşteşti (Cluj county) hydropower plant signed a comfort letter in this regard with the executive vice president of Sinohydro Corporation.

Therefore, the 1970-80s projects of Tarniţa-Lăpuşteşti plant, which will pump water upstream using energy produced during the period of low consumption (during the night), to release it during peak hours, could finally find the 1 billion euro needed for its financing. The plant will have an installed power of 1,000 MW and will balance the demand and supply during the top consumption moments.

Also within the meeting with the Chinese delegation, the director of the local Energy Complex Oltenia signed a letter of intent with the president of China Huadian Corporation for the new thermo project in Rovinari, worth 1 billion euro. The project entails the construction of a new group of 500 MW that will use lignite and will export energy.

Another project worth 200 million euro was signed by the director of Hunedoara Energy Complex and China National Electric Engineering, for the refurbishment of group 3 and 4 from the thermo complex in Deva. Refurbishing the groups will enhance their efficiency and reduce contaminants, especially the sulfur dioxide emissions.

At the same time, at the Government was signed an agreement for investments in wind centrals and export equipment by Romanian Păunescu Corporation, owned by Bobby Păunescu, and Mingyang Wind Power Group.

Another memorandum was signed for supporting the telecom company Huawei Technologies in establishing a regional center in Bucharest.

Chinese may take over Oltchim

Following the visit of the Chinese delegation in Bucharest, the legally-appointed insolvency managers of Oltchim signed a letter of intent with Baota Petrochemical Group and Junlun Petroleum, as the two Chinese companies are interested in privatizing the Râmnicu-Vâlcea chemical plant.

“We guarantee by this letter of intent to the Chinese companies a non-discriminatory treatment for attending the Oltchim privatization, as well as respecting all of the European commitments. For us is a good thing that there is still a consortium interested in Oltchim. There is a major interest in Oltchim, which I hope will result in many offers”, said minister of Economy, Andrei Gerea.

He also said that the privatization will undergo a transparent and open process, while the ministry of the Economy is „optimist and trustful” and awaits „with emotion” to open the offers.