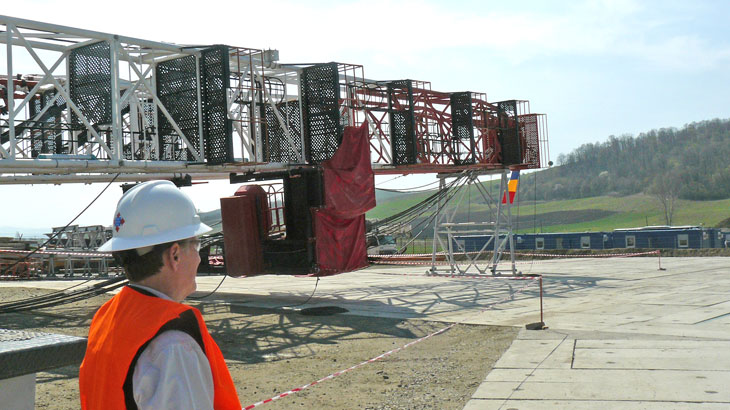 U.S. company Chevron presented journalists in Pungești the site where exploration will commence shortly to identify and assess shale gas deposits. Almost simultaneously with the exercise of transparency of Chevron, it has been issued the building permit for the exploration in Puiești, 47 kilometers from Pungești. Chevron owns two other environmental agreements in Vaslui for shale gas exploration in Păltiniş – Băcești and Popeni-Găgești.

From Bacău to Pungești the road winds through the hills for about 66 kilometers. Windings and sloppy road allow only rarely and briefly speeds higher than 50 kilometers per hour. So more than an hour of driving is time enough to feel the calm beauty of suroundings – a natural beauty given the variety of the landscape and the discreet presence of man’s traces. The villages are scattered on both sides of the road, with no ambition to compete in any way with the environment. Most houses slightly overcome a man’s height and are almost invariably eaten by rust, dust and mold. “Heavy poverty around here”, one says beside me. Indeed, scenery owes a lot to the modesty of all construction, to the absence of most signs of modernity. In fact, cars left aside – rare and obsolete – he only slightly noticeable signs of modern civilization are electrification lines and television antennas.

Outside Bacău, the gas infrastructure ends and all signs of industry also disappear. The main activities around here are farming, forestry and especially agriculture. Despite the oppressive poverty, most of the lots of land near the road are worked, they look neat and do testify the efforts of local people. I saw 3-4 tractors, and also two pairs of horses pulling a plow behind them. Like almost everywhere across Romania, I saw old people working their gardens with the same technology as a hundred years ago: a shovel, a spade and their arms.

Insulation over the entire working area

The Chevron’s site is placed in one of the few flat places near the road, between two ridges of hills. The nearest house is 600 meters away and the village itself a mile away. I’m surprised how little the yard it is: a rectangle you can cross by foot in less than two minutes on the long side. Immediately after the entrance, on the right, there is a high earth bank, quite different with the severe order within the rest of the yard. I find out that that is the soil uncovered for installing the drilling rig; it will be restored after completing of the exploration. 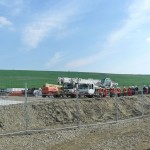 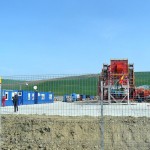 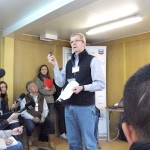 The visible part of the rig – which will be raised to vertical in short time – covers almost all the working space. Under it, the land was prepared to prevent any seepage or accidents impacting underground waters: insulation all over, concrete walls ob the laterals, drainage ditches and rainwater collection tanks etc. In the corner of the working area there are water monitoring wells (with 15 and respectivelly 85 meters depth) that are regularly checked by local authorities with responsibilities in this area.

One million lei investment in 2014

Tom Holst, manager of Chevron Romania, announced that in the first three months of the year, the company invested one million lei for site preparation at Pungești. The priority action directions were ensuring environmental protection and preventing any incidents. Chevron official said that two checks have already been carried through by the Environment Guard. At its turn, the company has simulated various situations of crisis to test the efficiency of the scheduled response.

Meanwhile, Chevron led investigation found out that, in several areas near the Pungești yard, there are recorded measurable amounts of methane in surface water. Jim Christianopoulos, responsible for medium for Chevron, has indicated that the water quality baseline assessments detected Methane up to levels of 12.7 mg per liter. In the United States, there is a recommended maximum level of 28 milligrams per liter, which once discovered by the owners of wells should be communicated to the government officials. Below 10 mg/l, there is no recommendation.

Chevron currently has 32 ​​employees original from Pungești, and a total of 56 original from the villages in the county of Vaslui. The numbers may seem small, but for everything to unroll according to plans – which is safe for people and for the environment – companies (Chevron and Dafora alike) use only qualified personnel in key positions, specialists with extensive experience in operations of this kind, in Romania and across borders. Or the oil and gas industry has no tradition in the area. This explains, in part, reactions of fear, misunderstanding and revolt diplayed by some locals when Chevron first time appeared. Now, according to company officials, most from neighboring villages accept or support the company’s operations. Protesters are less numerous – those I saw Tuesday were no more than 50 people – and especially in times when their actions may enjoy large coverage in national media.

Samples from 3,500 meters under the ground

The probe mounting is almost complete. It was brought to Pungești in pieces, after had passed through a verification and renewal process in order to eliminate any technical surprises once the operations began. Gheorghe Călburean, general manager of Dafora, is the man responsible for this. He insisted that his company has carried out many similar operations in Tanzania and Uganda, but also in France, Bulgaria, Hungary and Israel.

Moreover, the same company executed just few years ago three exploration operations in several locations in the area. In villages Stânița, Oţeleni and Vlădnicele, within a radius of up to 60 km from Pungești, Dafore installed probes, conducted the exploration (at depths up to 2,500 meters) and restored the land to its previous state. 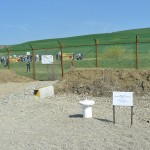 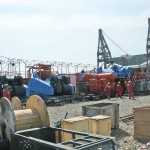 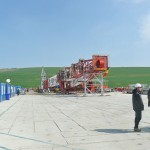 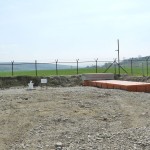 The installation at Pungești will soon become of the over 22,500 wells exploration/research in Romania. What’s different here? This probe will dig to a depth of over 3,500 meters to bring to surface material samples (rock fragments, basically) for the geologists to analyse in search of more information about the economic potential of the resource identified by means of seismic surveys. Cores extraction procedure generally lasts up to 100 days, but may extend further depending on what the deep geological structures will reveal.

Tests and analyses may take months or years, and only after that there will a decision on whether there are enough practical reasons to start the commercial exploitation of gas in Pungești.