On 9 July 2020, the European Commission approved the creation of a new fund, called the Modernization Fund, to support the transition to a climate-neutral society. The fund is mainly dedicated to low-income Member States (practically 10 Member States with the lowest per capita income). The funding available through this fund can be used to modernize energy systems and increase energy efficiency in these states.

This way, the European Commission wants to support the energy transition in the countries where it is most needed and where it can ensure, among other things, a long-term socio-economic development based on renewable energies.

The main purpose of the energy transition is to reduce carbon pollution and the impact of the global energy system on the environment. Applied to the Eastern European context, the energy transition can bring a number of additional benefits, such as reducing dependence on fossil fuel imports, developing a local renewable energy sector, promoting regional cooperation for the development of modern energy connections or general socio-economic development. due to the increase of locally produced renewable energies share.

Three scenarios for the evolution of renewables in the region

Given the possible positive impact on the region, IRENA experts analyzed three scenarios for 2030 regarding the development of renewable energies for the CESEC region, which includes Albania, Austria, Bosnia and Herzegovina, Bulgaria, Croatia, Greece, Hungary, Italy, Macedonia. North, Moldova, Montenegro, Romania, Serbia, Slovakia, Slovenia, Ukraine, Kosovo and Cyprus. Thus, in the report published in September 2020, IRENA presents: 1. the situation of renewables in 2015, 2. the baseline scenario – in line with the commitments and strategies published by governments in the region by 2030, and 3. the REmap scenario – an alternative optimistic scenario in which the countries in the region would prioritize investment in renewables and energy efficiency beyond current commitments.

All three are shown in the chart below and we can see that in some cases (such as Albania, Croatia or Macedonia), the target for 2030 was already exceeded in 2015. For many other states, this officially assumed target for 2030 was almost met in 2015 (including in the case of Romania). In this context, the REmap scenario presents an optimistic alternative that involves exceeding the assumed targets for 2030, and the additional potential identified by the study varies from + 6% to + 20%, compared to the 2030 scenario. 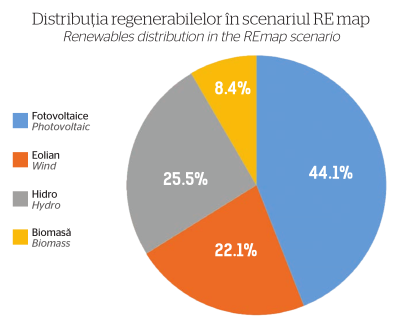 Where can growth come from?

Renewables in the power system By applying a series of policies designed and coordinated at regional level, which would allow the effective balancing of electricity markets, renewables could increase significantly in the power generation segment, largely substituting electricity production based on coal. Thus, in the REmap scenario we would have in 2030 about 55% of the electricity consumed in CESEC countries from renewable sources – 620 terawatt-hours [TWh] compared to 253 TWh in 2015. The installed capacity in renewables (263 GW) in this case would had the following proportions:

Renewables in the heating system In an article published by InfoClima.ro and Energynomics, Andrei David Korberg presents a 6 steps alternative path to a 100% renewable system. Two stages out of these (step 2 and 3) explicitly refer to heating systems. Thus, the implementation of renewable solutions in this field can lead to an energy system with 40% share of renewable energies.

These conclusions are also confirmed by the study conducted by IRENA, which claims that for the CESEC region, the implementation of district heating, cogeneration and thermal energy storage solutions can lead to a heating system supplied 50% from renewable sources – about 251 petajoules, equivalent to consumption Austria’s annual natural gas.

How much it costs vs. how much we could earn

Costs IRENA experts say that states in the region should increase investment in the energy system to modernize transmission and distribution systems. In order to achieve these modernizations, cumulatively, the states should invest about 303 billion euros for the implementation of scenario 2 (the one already assumed through official policies). At the same time, for the optimistic implementation of scenario 3, the states in the region should invest 78 billion euros more than in scenario 2, bringing the total investments to 381 billion euros.

Benefits However, these investments could bring substantial benefits to the states in the region, namely:

Thus, if we aggregate all the benefits for the entire region, we can talk about savings that can vary between 8 and 32 billion euros per year. Even in the most pessimistic scenario, this means that additional investments in the energy system (78 billion euros) would be recovered in less than 10 years, while bringing benefits that are harder to quantify, such as energy security, the development of a sector. local energy and increasing the competitiveness of regional companies and, last but not least, socio-economic development at the local level.

Given the creation of the Modernization Fund by the European Commission, as well as the need for economic recovery from the crisis caused by Covid-19, investments in the energy system, especially in renewables, could be an alternative path of development that would allow region to create a viable energy sector at the same time with local development potential.