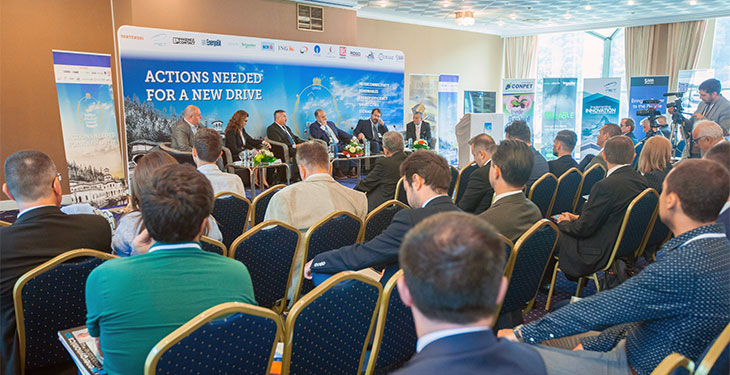 When energynomics.ro proposed the agenda of the 4th edition of Energy Strategy Summit under the title “Actions needed for a new drive,” we anticipated four of the possible answers: investment, integration, transformation and new technologies. The contributions of the 24 speakers detailed and explained these needs from all perspectives promised by the large number of companies and institutions represented. In addition, two more responses arisen: vision and modernization of energy governance. We continue to present the conclusions of the 2018 Energy Strategy Summit, with a new synthesis of the debates, structured in 5 types of needed actions.

A vision for the development of the Romanian energy industry

As presented by Energy Minister Anton Anton, the future form of the national energy strategy starts from the fact that Romania is part of the process of creating the Energy Union, alongside with the other European states. “We all know that the Energy Union means a regional market based on the free movement of goods, but also on high standards of energy efficiency, environmental protection and consumer affordability”, he said. “Romania takes all its obligations as they decided by Brussels, but this assent must be a conscious one, based on the specifics of the Romanian energy system, and taking into account our objective reality,” Anton Anton said.

Also relevant for the basis of the vision for the energy industry, this year’s summit has shown that it is not enough to look for it in European and national strategies, not even in the strategies of the large companies, as well. “The big gain of this year’s edition is that we identified the micro-strategies – of consumers – as a basis for the future evolution in the energy industry,” Gabriel Avăcăriţei, editor-in-chief of energynomics.ro, concluded at the end of the debates on 7 June.

Interconnection with regional energy markets is not only an obligation resulting from Romania’s membership of the European Union but is, above all, a guarantee of securing the necessary energy resources (power, natural gas and crude oil) needed locally, including during the short periods of peak demand. At the same time, interconnection is an opportunity to develop the local energy industry, from exploration and production, to storage, transport and distribution. Finally, only with real interconnection, allowing for exports relevant in size and value. We want “to move from simply being a market to being a hub of transport routes that unite Europe with neighboring areas”, said Minister Anton.

This requires considerable investment, given that the Romanian energy system is outdated in many aspects. The minister referred to the reduction of carbon emissions in transport sector: “it means a lot of money that Romania does not have at the moment”. State-run energy companies announce important investments. Once again, Minister Anton Anton: “CE Oltenia plans to invest 810 million lei for 2018. Romgaz has planned investments of 1.6 billion lei, of which 400 million have already been invested. Nuclearelectrica aims to invest 254 million lei, double the value of last year (131 million lei). Hidroelectrica has budgeted investments of 110 million euros compared to 64 million in 2017 and the 40 million euros two years ago”.

Beyond these amounts, private companies also announce significant investments with OMV Petrom at the forefront. Only investments in offshore projects can amount to billions of dollars, with a multiplication effect of 1 to 3, that is, each dollar spent in offshore projects in Romania will generate 3 dollars in gross domestic product (Lăcrămioara Diaconu-Pințea, OMV Petrom). In addition, dozens of onshore projects can attract their necessary funding from investment funds or from large banks operating not only in Romania, but all over the world, with rich experience and some investment tools not very used in Romania.

One of the key prerequisites for a new drive in the national energy industry is the legislative clarification expected for years. Essential acts – such as the Energy Law, Oil Law, Mining Law, Heating Law, Biomass Law, Renewable Energy Law, Royalties Law, Offshore Law – are in parliamentary debate with the ever-renewed promise that they will be adopted soon. Interinstitutional communication, first in the Government, but also in the relationship with Parliament and local public authorities, needs to be greatly improved.

As about the regulatory bodies, NAMR needs, and rapidly, a substantial plus in human force and technology. The agency manages about 470 oil exploration agreements and about 57 oil exploration agreements, i.e. about 13,700 active wells. “We are covering all this activity with 23 people, 10 in the territory, with control responsibilities, and 13 in Bucharest, working for regulations”, said Sorin Gal, General Director for Oil and Gas within the Agency. The Regulatory Competent Authority For Offshore Oil Operation at the Black Sea – ACROPO expects legislative clarifications and it is in full process of recruiting qualified personnel. Finally, the National Regulatory Authority for Energy – ANRE depends in many of its actions on future legislative decisions.

In conclusion, there is a need for a large and fast upgrade of the energy governance system by modernizing the legislative framework and strengthening the regulatory bodies in the field.

Almost independently of major national decisions, and sometimes even against them, every day contributes to a wider presence of new technologies in our lives, which in turn modify how energy is generated, but especially how consumption is monitored and controlled, in each household and in every organization, large or small, industrial, public or commercial. Driven by the need to optimize their energy bill, and also by the mirage of new savings or comfort opportunities, companies and individuals choose even more digitalized solutions, IT platforms, automation, remote communication and control.

All this already changes the needs and the behavior of all actors in the energy market, it will lead to new approaches from the authorities and raises new risks, such as cyber security.

“Given that Romania has this global prestige and it also has IT specialists who are recognized all over the world, it would be a pity not to play a leading role in the development of these technologies”, said Zoltan Nagy-Bege, vice president of ANRE. Participants in the Energy Strategy Summit also referred to the opportunity to develop, or support the local development, of new energy related businesses that could replace pre-1989 industrial giants, with a new technology-based industry. “Romania can produce technology as long as we consider the software area as an area of technology,” said Cristian Pîrvulescu, executive director of Enevo Group. “We produce in Romania charging stations for electric cars and power generation systems, and 99% of our Romanian production is exported”, said Bogdan Cojocaru, Business Development Manager at Stratum Enclosures. “We see that engineering returned as an interesting career choice for young people”, noted Cătălin Lepinzean, Business Development Manager at Phoenix Contact.