The first edition of the “Energy Efficiency for Big Results” series – “Energy Efficiency – Opportunities of the Moment” brought together in the Mezanin salon of Unirea Hotel in Iasi over 60 people involved in the dynamic efforts needed for more energy efficiency at local level. Recommended by the National Regulatory Authority for Energy – ANRE, for the third consecutive year, the conference also benefited from the trust of the Iasi City Hall, once again well represented among the invited speakers. 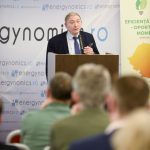 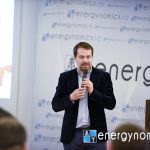 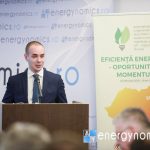 The conference was opened by Cătălin Boghiu, responsible for the Smart City projects of the Iaşi municipality. These include digitizing municipal services and offering access to open data to all those interested. One step in this direction was already made in mid-February when Iasi Town Hall started offering free wi-fi internet access for all using the 259 trams and buses managed by the Public Transportation Company.

Cătălin Boghiu referred to City Hall’s actions and projects in the Smart City program. The main element in the electricity area is related to public lighting. “In order to launch an investment project, we bought the entire public lighting network worth EUR 210,000, after which we prepared a 4.6 million euro worth project for rehabilitation, modification, and expansion of the network”, Boghiu said. LED lighting systems, remote management systems and transmission points on each pole, as well as solar panels, will be introduced. “We will introduce sensors that will allow to increase and reduce the intensity of illumination automatically, depending on the ambient light,” Boghiu exemplified.

In respect to thermal energy, the Mayor Hall’s representative reminded of the EUR 61.7 million invested for the refurbishment of the installations at CET Iaşi. “In the second stage, we are dealing with the rehabilitation of the primary and secondary heating networks, an investment of 21.7 million euros,” Boghiu added. He also referred to the EUR 2.8 million project, which allow Veolia to produce electricity and heat in cogeneration in a 4MW group, since September last year.

One of the city’s most interesting projects is the creation of a so-called “energy blockchain” to connect multiple buildings in order to allow the transfer of energy from “positive” buildings (which produce more energy than they consume, in general industrial buildings) to energy “negative” buildings.

Waste to energy by incineration or biological treatment

In his speech, Romulus Berdei, General Manager of Control Point, continued on one of the themes reached by the Iasi City Hall official, explaining the concept of circular economy for waste management, from collection, sorting to efficient energy recovery. Iasi has introduced several initiatives to encourage the selective collection of waste. In addition, a software application allows large waste producers (companies) to announce when it is best for municipal cars to collect waste. “We are going to introduce sensors to alert when garbage cans are full,” added Cătălin Boghiu, “so the collector vehicles to change their route, thus reducing the fuel consumption.”

The Control Point representative presented two tested solutions for the efficient management of municipal and industrial waste, based on technologies provided by Hitachi Zosen Inova (HZI): 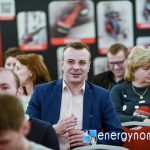 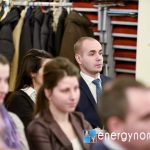 The Control Point company from Brasov is the official partner in Romania of the Finnish group Valmet – Automation division and it already has an extensive automation portfolio of both types of waste management solutions. “Incinerators for energy recovery are long-term solution, with energy use, flue gas treatment and materials recovery”, Romulus Berdei explained. Since 2010, Control Point experts have worked with many clients in dozens of such projects, mainly in the UK, Finland, Austria and France.

Anaerobic digestion is the second solution presented by Romulus Berdei as a possible response to the obligations to eliminate waste disposal in the open field. “We are part of such a project in Greece where, right beside the waste sorting facility, this treatment plant, this digester, was placed. Waste is treated under controlled conditions and for a well-defined period to produce a compost that can be used as a fertilizer. Biogas is used as raw material for the production of heat and electricity”, Romulus Berdei explained.

Theodor Livinschi, sales manager at MET Romania Energy, the third-largest electricity supplier and the 4th largest supplier in the wholesale natural gas market, presented the company’s six business lines: supply and trading electricity and natural gas, balance responsible party, technical services and special projects. Theodor Livinschi insisted on the company’s values and on its technical and economic capacities to offer to the customers in the supply segment the stability of the contract until its conclusion: “We respect the price of the contracted electricity irrespective of market evolution, this being possible because we immediately contract all the necessary quantities”, insisted the representative of MET Romania Energy.

The company has installed at partner sites systems which currently allows 35% of the electricity to be managed, remotely in real time. “To maximize energy efficiency, the technical component is the most important, but that which can have a decisive contribution to achieving each consumer’s goals is the conceptual understanding and assumption of the importance of energy efficiency. In this regard, we organize working meetings between our partners and also meetings involving all stakeholders: OTS, distributor, supplier and consumer”, explained Theodor Livinschi, before talking about how can MET Romania Energy help:

For MET Romania Energy, environmental care has materialized in the offer of a 100% green energy supply package, NaturePower, certified by TUV, for three years now. “What distinguishes our product from other similar products is that we are calculating the balance hourly, and not monthly, as is the case more frequently,” said Theodor Livinschi.

Alin Strilciuc, sales manager for Moldova Region at Eximprod, presented a 100% Romanian company, active for more than 20 years, with four factories and more than 450 employees. “Our most relevant product is the insulator for transmission lines; we manufacture the entire range of 110 kV (circuit breaker, disconnector, and instrument transformers) equipment,” said Alin Strilciuc, who added that Eximprod works with all the major actors in power transport and distribution in Romania, as well as with the big equipment manufacturers (Siemens, ABB, Alstom, Schneider). 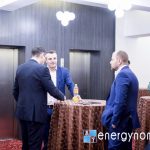 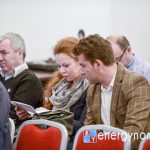 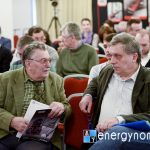 “We have one of the largest IoT and software development teams for the Romanian energy industry with more than 80 people,” Alin Strilciuc said, before presenting in detail the ES200 equipment developed in cooperation with CISCO. “In general, the most common SCADA environment involves multiple vendors and equipment of various age in the installation. This means that software solutions depend on vendor, most often it is embedded on specific hardware, and there is dedicated hardware for each function. As a result, there is low security on existing equipment and protocols, and updates are difficult.” ES200, the creation of the Eximprod team, “encompasses all the security and SCADA requirements in a single product,” says Andrei Strilciuc. The ES200 is already contributing to the increased operational performance in the distribution networks of Electrica’s  and E.ON. For Monsson, ES200 is the main equipment for data conversion in all its parks and dispatching system.

At “Energy Efficiency – Opportunities of the Moment” in Iași, Eximprod presented an application running on Siemens MindSphere platform for scalable performance and energy efficiency in buildings. The system collects real-time data, builds profiles for users and specified areas, stores information in the cloud, enables viewing on mobile devices, launches alerts, and suggests actions to be taken by building administrators.

Dr. Eng. Teodor Poiată is an energy manager, member of the Society of Auditors and Energy Managers in Romania – SAMER, responsible in the Society with the coordination of the action group of energy managers for municipalities. At the same time, Teodor Poiată is one of those few energy managers who managed to access European money in order to install energy monitoring systems for consumers of more than 1,000 tep, through POIM, the specific objective 6.2. “The program was launched in October 2016, and so far 11 contracts have been signed, two are finalized and another 10 are under evaluation,” said Teodor Poiată. The latest public reports of ANRE identified more than 750 companies with over 1,000 tep energy consumption, who would qualify for access to this type of financing; most of them, over 400 (53%) come from the manufacturing industry.

Between February and November 2019 we scheduled seven conferences aimed to highlight the need for and the benefits of implementing energy audits, with examples of actions and technologies for increased energy efficiency.

Each conference features top speakers and themes such as: legislation and regulation in energy efficiency, financing for energy efficiency projects and support for public authorities and SMEs.