Home»Analyses»Looking for the main objective of Romania’s energy strategy? It was decided in Brussels: 32% share of renewables in 2030

The European Union’s target for the share of renewable energies in total energy consumption in 2030 is mandatory for Romania, and the exact percentage that will result for our country – 27%, 31%, 34% – does not change the situation in a significant manner. What is even more important is that all the other objectives discussed during the last years become secondary, regardless of the weight they have, for real or for ideologically exaggerated reasons, at the national scale.

Negotiations are under way in Brussels, but Romania’s has little space to play. European officials take into account the potential of the renewable energy sector in Romania and the need for an accelerated upgrading of electricity and heat generation capacities.

However, our country has three arguments to request a smaller target.

At the same time, the power of influence of the other states of the Union far exceeds that our country proved in the last decade. A relevant precedent is that for the 2020 horizon, Romania has accepted a 20% more ambitious target than the EU target (24% versus 20%); this makes it unlikely that Romania will be able to get itself a 2030 target lower than the new 32% target which seems to be assumed by the EU.

This new target will be decided in the negotiations under way and it will become the central element of the integrated national energy-environment plan that Romania has the obligation to present to Brussels by the beginning of December. The document will include sectoral targets and concrete actions scheduled for 2020-2030, including legislative and regulatory measures to be introduced within this timeframe.

With or without a national energy strategy, be it implemented or not, the overall target and the sectoral targets will become mandatory once the integrated national energy-environment plan is approved, perhaps by the end of 2019.

The bargaining arguments outlined above are to a large extent the reflection of the objectives announced by the authorities in the last years in all the energy strategy draft projects: affordability of energy bills at the level of companies, population and public institutions, energy security (access to primary resources and stability of the national energy system) at local and regional level, maintaining integrated cycles in the national (nuclear) energy industry and mining industry for as long as possible. What we see is that environment protection (increasing the share of renewable energies and reducing greenhouse gas emissions), beats politics (Romania as an energy security exporter for the region), social perspective (the affordability of energy bills for the population and public administrations, the future of mono-industrial areas), and economy (the affordability of energy bills for companies, integrated energy cycles).

The role of the national energy strategy is precisely to accommodate the environmental protection obligations with the other national objectives, deriving from the specifics of the Romanian energy industry, economy and society.

How to reach the 30% share of renewable energy target

Specifically, what is the national strategy good for (in this context)? For identifying sectoral objectives and, above all, for clarifying the concrete measures in each sector, for integrating them at national level and for shaping roadmaps for each sector. 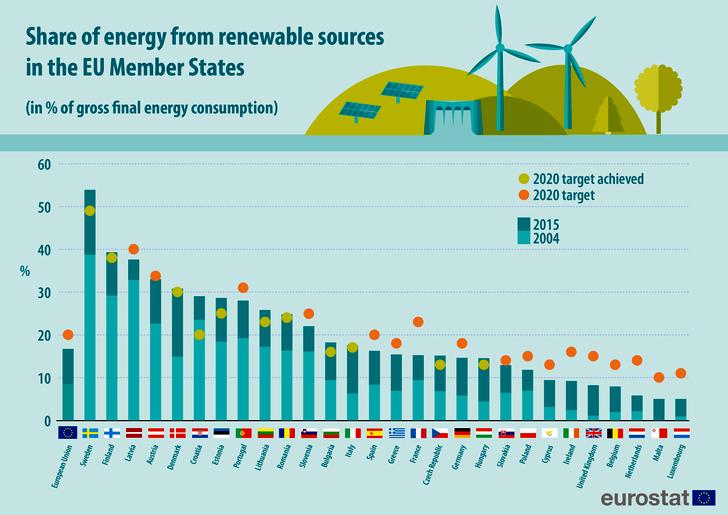 An analysis of national statistics in regard to the share of renewable energies in electricity generation, transport and heating/cooling shows that Romania has so far reached its national target (24%) almost exclusively due to three determinants:

At the same time, EUROSTAT statistics show that in 2016, the last year for which we have official figures, Romania observed its target for 2020 regarding the share of renewable energies (25%, compared to 24%). Breakdown by sector, however, we note that only in electricity generation Romania has a solid position: 42.7%, compared to the target of 24%. In the heating/cooling sector, our country reports a 26.9% share of renewables, still above the target, but only because we include firewood, a resource predominant in most of the rural areas and even in most of the small cities. In the transport sector, Romania reports a share of renewable energies of 6.2%, far from the target of 24%.

It is important to note that in total, transport and heating/cooling sectors count for about 70% of the national target. A first conclusion is that Romania currently reaches its target of 24% only because it has a much higher share of renewable energy in the generation of electricity. If we continue to rely solely on renewable electricity generation, the 24% cumulative target can only be achieved if all electricity production came from renewable sources! This scenario is completely implausible given the balanced mix of generation, from where coal (26.42% share, in 2017), nuclear (18.37%) or natural gas (16.83%) are impossible to be removed in a few years.

The emphasis should be changed on transport and thermal energy

Measures discussed up to now in order to introduce renewable energy sources in transport – e-cars based on green power) or alternatives to conventional fuels (compressed natural gas, hydrogen, etc.) – are far from encouraging. It is hard to believe that by 2030, the share of renewable energies will increase in the transport sector, especially given the trend of increased energy consumption in transport as a result of accelerated growth of the car fleet (especially fossil-fueled second-hand cars) the development of air transport and the constant degradation of rail transport infrastructure. The only favorable trend in this sector is the modernization of municipal transport, using (green) electricity and compressed natural gas as a less polluting energy resource.

The only sector with real potential for improvement remains heating/cooling by 1. cutting losses, reduced consumption and consequently reduced share in the total target, 2. transition to modern, more efficient and more environmentally friendly heating/cooling solutions, among which distributed generation integrating renewable and storage.