We continue to present the 2017 nominations for the energynomics.ro Awards, with the Young Energy Professional category. Only one of the experts below will be awarded during the Gala from December 7th, but every company and everyone involved in these projects deserve our respect and the widest promotion. We thank all the companies and personalities involved in this effort to draw the image of the Romanian energy industry in 2017 through its achievements! 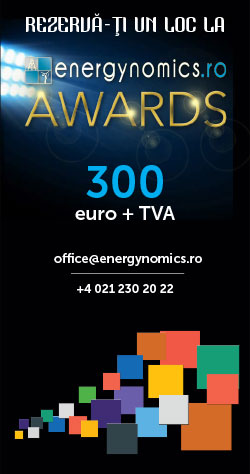 For the involvement and success of his activities in securing the first financial installments to the CE Oltenia, through the BEWEXMIN project, to optimize the lignite extraction process.

The BEWEXMIN project is a partnership of several institutions from four countries with a financial contribution from the European Union of 1.69 million euros, at maximum.

“As Project Coordinator, I handled the documentation, monitoring, questioning etc. We managed to get European funding and get all the installments according to the schedule. This year other two other European projects where CEO is partner will be financed,” said Ionuț Predoiu, who since March 2017 has been head of the Energy and Mining Service in the CEO and adviser to the State Secretary at the Ministry of Energy.

The BEWEXIM project is very important from the point of view of the lignite extraction process, on order to ensure the coal volumes required by the thermal power plants for power generation.

An excavator can extract about 15,000 tons of coal per day, which provides the coal needed to operate two 330 MW groups per day. Blockage of an excavator, especially in periods of maximum demand (winter, prolonged drought) combined with the situation of minimal reserves at quarries and in thermal power plants, can lead to malfunctions in generation of electric and thermal energy.

The goal of the BEWEXIM project is to eliminate possible damages due to the occurrence of hard rock inclusions in the working front which may affect the excavator’s cutting tool and implicitly lead to the shutdown of the technological lines; technological lines that feed the thermal power plants with raw minerals.

Beginning with 2013, the Romanian Polytechnic students, through IRE and supported by companies in the energy sector, participate in the EURELECTRIC Convention & Conference Student Award competition, organized annually in one of the member countries of the European Union.

The delegation of the Romanian energy sector was composed of the Polytechnic students, supported by b, President of IRE and Cătălin Stancu, General Manager Societatea Energetică Electrica SA, new member in the EURELECTRIC Board of Directors. Among the conference participants and a supporter of the team was Arina Anisie, Program Officer at IRENA – International Renewable Energy Agency, based in Bonn, Germany.

Passionate about energy and a graduate of the Bachelor and Master Cycles of the Faculty of Power Engineering (UPB), Mihai began his research career at the National Center for Hydrogen and Fuel Cells (ICSI Rm. Vâlcea) in 2010, taking contact with hydrogen-based energy technologies and their integration with RES. In the following years, he was involved in storage by participating in the development and implementation of the ROM-EST (Energy Storage Technology Labs) project, as well as with his PhD thesis centered on Power-to-Gas. In 2017, he took another step towards the energy industry by starting his work at RWEA – the Romanian Wind Energy Association.

The main achievements in 2017 are related to a long-term activity which potential impact will be more visible in the coming years. Along with a young and ambitious team, Mihai Bălan:

Transelectrica supports young energy specialists and promotes a serious exchange of knowledge from seniors to the young generation. As a result, Mihai Marcolț, a young energy engineer involved in the international projects of Transelectrica, member of the prestigious international organization CIGRE, is proposed for the Young Professional of the Year award.

At 32, Mihai Marcolţ has nine years of experience in the field of energy and currently holds the position of Head of Innovation Research Service at Transelectrica. Previously, he held various functions such as Electrical Network Expert – System Expertise Service, Engineer and Technician. Currently he is the coordinator of Transelectrica within the CrossBow project.

The CrossBow project, where Transelectrica is a partner with the Romanian Energy Center, is part of the European Commission’s “Horizon 2020” program on research and innovation, ie the LCE – 04-2017 “Demonstration of system integration with smart transmission grid and storage technologies with increasing share of renewable”.

CROSSBOW debuted on 1 November 2017 and aims to share resources to promote the cross-border management of renewable energies and storage facilities, allowing greater penetration of renewable energy sources, while reducing the operational costs of the network and improving the economic benefits of RES and storage units.

The project has a financing value of 17.28 million euros, of which Transelectrica can access 400.969 euros.

With energy, drive, perseverance and a detailed understanding of all related complex issues, Oana took the lead role in unlocking all the regulatory matters in the way of developing offshore gas fields for BSOG.

Currently there are blockages and significant challenges in the way of obtaining all regulatory approvals for the development of the offshore fields including major issues that require appropriate changes of legislation as well as lesser issues that require alignment with agencies/ministries to agree to new and groundbreaking solutions.

Black Sea Oil & Gas SRL continues to move proactively ahead on all of its offshore and onshore regulatory approvals. This required support from the PM’s office to Ministers/Ministries of Environment, Energy, Justice, Labor, Regional Development, Finance and Culture as well as from ANRE, ANRM, the local community of Corbu, High Staff of the Military, Danube Delta Reserve, Forestry, Land Owners, joint venture partners and association partners. Oana led all of BSOG’s efforts whether through the various initiatives of the company as well as through the collaboration within RBSTA for creation of a new Offshore Law.

This effort required not only a detailed understanding of all the technical, environmental, institutional, governmental, legislative and regulatory issues but also strategy development and adjustment and how best to move these forward to a successful outcome and, most importantly, to deliver on action plans. Oana succeeded in delivering palpable results and for her role in putting forward a coherent and functional legislative framework for offshore petroleum developments in Romania.

Ten good connoisseurs of the energy industry in Romania reunited in the Jury of the fifth edition of the energynomics Awards and expressed their options and votes in a debate held on November 22th.