The 28th edition of Energynomics Magazine was launched on Friday, October 16th; it is fully and freely accessible like all the other previous 27 editions.

For them, we address the hottest topics, from the impact of the Covid-19 crisis in the energy industry, to the investment plans of Romanian companies, from automation and digitalization as solutions for optimizing industrial business, to the promise of power generation from solar sources. 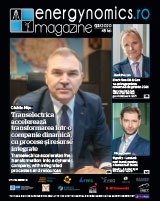 President of Transelectrica’s Directorate, Cătălin Nițu, talks about the decisions taken for fastening the transformation into a dynamic company, with integrated processes and resources. “For the local communities, the sustainable development of the electricity transmission network means the improvement of the quality and the security in the electricity supply”, says Cătălin Nițu. He also addresses the increasingly relevant presence of renewable energy in the national energy mix, which “defines one of our national priorities, namely the integration of production from renewable sources”.

The American company Black Sea Oil & Gas (BSOG) have launched the Midia Natural Gas Development Project (MGD), after more than $ 600 million invested here. CEO Mark Beacom believes that Romania must remove, as soon as possible, the legislation that prevents Black Sea gas projects: “It is absolutely necessary that legislation that is hostile to investment in the Black Sea, as adopted in 2018, disappear completely”. We have another year until the start of production, so I hope that by then the additional tax will be eliminated,” Beacom told Energynomics.

Răzvan Copoiu is the new General Manager of Signify Romania and 10 other countries in Southeast Europe. Signify has already reached the “zero” carbon free footprint for all its global operations; now it aims to achieve the same goal in Romania.

Decision-makers, experts and managers are also featured in the new edition of Energynomics Magazine.