Ukraine’s Naftogaz is preparing a formal complaint against Russian Gazprom’s “abusive and illegal practices”, announced Yuriy Vitrenko, Executive Officer of Naftogaz Group, on Tuesday, in Brussels. In a Policy Dialogue focused on Ukraine’s gas transit route and European energy security, organized by European Policy Centre – EPC, the official from Naftogaz expressed the company’s trust in the rule of law inside Europe: “There is a working legal system as demonstrated by our victories in Stockholm arbitrations”.

Vitrenko talked about the “firm intention” of Naftogaz to bring the “problem of abusive and illegal practices [from Russia]into EU attention in the form a Competition Law complaint” to be submitted in late April this year. “On top of … arbitrations, we will start fighting this problem inside Europe using the Competition Law as a ground, for the benefit of the European consumers, the Ukrainian state and for the stability in the region”, Yuriy Vitrenko added. 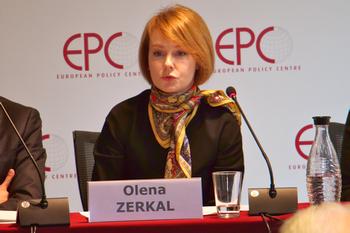 Also present at the debate, Deputy Minister for Foreign Affairs of Ukraine on European Integration Issues Olena Zerkal made a comment on the EU Council provisional agreement with the European Parliament on amending to the so-called Gas Directive, reached in February, under the Romanian Presidency of the Council. “We are very grateful to the Romanian Presidency for actually making possible the adoption of these amendments to the Gas Directive. We were advocating for them for more than a year, as we think that this is the way to advance towards a common legal ground for any kind of operators in the European market.” At energynomics.ro request, Olena Zerkal also elaborated on the impact of the changes recently agreed upon in the EU Council: “Now it very much depends on how these amendments will be implemented, and here we will see a primal role for the European Commission. We still think that the most obvious and accurate way to regulate the Nord Stream 2, in case of its construction, would be an agreement between the EC and Russia, where all kind of issues can be fixed.”