Demand growth for electric powered vehicles has accelerated in 2019 H2, shows the second edition of the Romanian E-Mobility Index developed by Roland Berger. In total about 1,960 units were registered in the respective period, up by 210% compared to 2019 H1. New car registrations for pure electric vehicles (EVs) more than tripled in the second semester, while plug-in hybrid electric vehicles (PHEVs) registrations more than doubled over the same period.

The Romanian E-Mobility Index launched by Roland Berger (REI) in 2019 is an indicator of the degree of development of the local electromobility market. Its value was determined on the basis of 12 key indicators; the first edition revealed a local electromobility market score of 30, compared to a theoretical development potential of 100 in 2025. 2019 H2 index stands at 33 points (out of a maximum possible 100), around 3 points above the score of the first edition in 2019 H1. 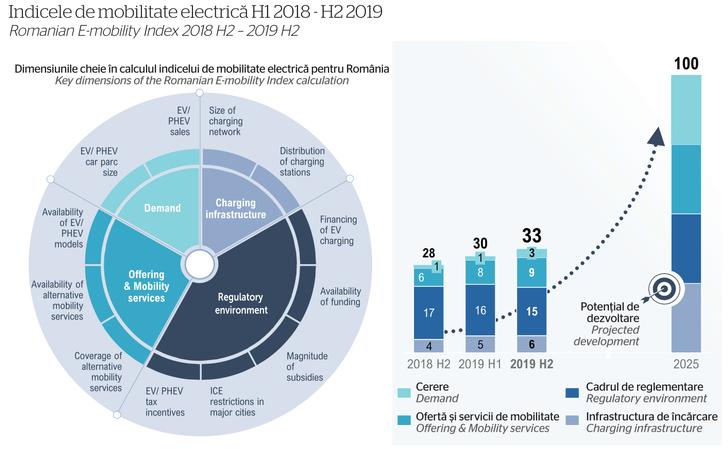 Each edition of the report monitors the evolution of the index, based on a bi-annual study that will include recurring analyses on key topics for the Romanian market; among them, the evolution of the registration of electric vehicles, comparisons of the total cost of ownership (TCO) and the dynamics of the charging infrastructure or alternative solutions of electromobility, to name a few.

Electromobility is emerging as a multi-sectoral topic relevant in multiple areas of business, both in the private and public sectors – Szabolcs Nemes, Partner and Managing Director of the Roland Berger office in Bucharest

The Roland Berger study offers an overview of the key factors for the Romanian electromobility market, including the demand / penetration level, the available offering and mobility services, the regulatory framework and the charging infrastructure. “We address a wide range of industries, from energy and utilities to retail, automotive or financial services,” says Szabolcs Nemes, Partner and Managing Director of Roland Berger’s Bucharest office. Szabolcs Nemes explains that the initiative to launch the first electromobility index in Romania is based on Roland Berger’s own methodology for evaluating the degree of development of the sector in a systematic way.

Demand for EVs is boosted by developments on several fronts, writes the report. Primarily, customers are acting on the clear cost advantages of EVs vs. internal combustion engine (ICE) vehicles (for an average car mileage above a specific threshold). Secondly, state grants and evolving infrastructure are driving the transition to EVs, especially in condensed urban areas. Thirdly, the environmental awareness of the consumers also starts to matter.

The share of EVs and PHEVs has increased from ~0.9% in the first half of 2019 to ~2.2% in the second half (out of total new vehicle registrations). This acceleration is of particular interest in the context of Romania, which is primarily a used car market, with only 28% of new registrations in the last 6 months being new vehicles.

However, for xEVs – accounting for both EVs and PHEVs – the share is 72%, proving the market’s appetite for the latest EV and PHEV technologies.

2019 H2 saw the growth of available EV & PHEV models improve over 2019 H1, being evenly distributed across the two categories. As manufacturers launch new EVs and hybridize their existing model range, the trend is expected to accelerate over the next 6-12 months.

2019 H2 has seen a major development in terms of micro mobility providers, with a total of 7 players in the market, compared with none in 2018 H2. 3 new providers offering scooters and bicycles have started operating in Bucharest during the second half of 2019. As a result, the segment is becoming increasingly competitive.

The car sharing market is showing constant growth in terms of providers, with one new player in 2019 H2 and at least another one expected in 2020 H1. There is the potential for additional offerings from existing players and disruptors, such as dedicated parking services and locations.

Almost all alternative mobility services providers have operations in Bucharest, with Cluj-Napoca, Iasi and Timisoara generally targeted as the next hubs for expansion.

At the end of 2019, the national charging infrastructure consisted of ~400 stations and was increasing at a steady rate of ~30% every 6 months. The number is still significantly below the national 2020 target of 6,000 stations communicated some years ago by the Environment Ministry.

Charging capacities still favor slow charge with a maximum installed power of 50 kW. Only ~25% of stations are currently capable of charging at powers above 22 kW. The low share of multi point stations (34%, ~5 p.p. lower in comparison to 2019 H1) can create inconveniences, considering the higher average duration for charging when compared to a traditional fueling station, especially if the chargers do not allow for reserved bookings.

Electric buses – the perfect use case

In addition to monitoring the evolution of the index and analyzing key topics, each edition of the Roland Berger study addresses a special, hot topic for the period analyzed. The theme of the first edition was the local regulatory policies, as Bucharest municipality has tried to align itself with the main capitals of Europe, although without introducing major restrictions for internal combustion engines. Following the removal of the Oxygen tax in Bucharest, no major Romanian city has ICE restrictions in place, and there are no plans to introduce restrictions on highly-polluting vehicles across major Romanian cities.

The latest study addressed the roll-out of electric buses by counties and cities – as the special topic; Cluj county leads the way in terms of electric bus (e-bus) adoption, with the city of Cluj-Napoca operating 41 e-buses (data from September 2019), followed by Turda with its entire fleet comprised of 20 e-buses. Another city in the Cluj county, Dej, expects its first operational e-buses in May 2020. Five other cities (Brașov, Zalău, Sibiu, Iași and Suceava) expect e-bus fleets in 2020.

The Southern part of Romania is laggard in terms of adoption, with limited plans for e-buses in the following period. 40% of buses in Romania are over 20 years old, leading to increased fuel consumption, higher maintenance costs and pollution. Furthermore, buses operate at low speeds where emissions are the most intense. For all these reasons, Roland Berger makes the case for the electric bus as the ideal use example. Modernization of public transportation can be performed via the introduction of e-buses in cities, with Bucharest being a prime candidate due to its high traffic and favorable topography (flat terrain).

Depending on the annual mileage, the purchase of electric vehicles becomes economically preferable for timeframes of 3-5 years – Dragoș Fundulea, Senior Project Manager at Roland Berger

The average speed for buses in Bucharest is between 10-15 km/h, while speed limits do not exceed 70 km/h even in suburban areas. As a result, e-bus would operate in optimum conditions, as lower speeds lead to less energy consumption.

The acquisition of e-buses and charging infrastructure is financed through MDRAP programs, which are supported by non-reimbursable EU and Swiss funding schemes. As a result of this expenditure saving, there is a clear TCO advantage for e-buses vs. ICE counterparts, as the latter do not receive the same level of funding.

The adoption rate for electric buses looks promising as Romanian authorities actively pursue e-bus adoption for public transport fleets. Cities in 34 out of 42 counties have either purchased e-buses or been engaged in obtaining funding and organizing bids to purchase them.

This article firstly appeared in the printed edition of Energynomics Magazine, issued in March 2020.

In order to receive the printed or electronic this issue of Energynomics Magazine, we encourage you to write us at office [at]energynomics.ro to include you in our distribution list. All previous editions are available HERE.