Romania could install more than 5,000 MW in new renewable capacity in the coming years, said Sebastian Enache, Business Development Manager and member of the board at Monsson, at the online event “Clean Energy Solutions for End Consumers”, organized by Energynomics on September 8. The six invited speakers outlined the current situation and specified the arguments on which the confidence is built that the renewables segment will experience a strong development in the coming years. After the initial presentations, the speakers answered questions from over 240 people registered in the online platform MyConnector. The event was supported by EnergoBit, Wiren Energy and Photomate Romania.

Dancă: By the end of the year, the contracts for the Electric Up program will be concluded

The contracts for this program could be made by the end of the year, said the head of the Chancellery of the Prime Minister, Ionel Dancă, during the event, thus giving the SMEs in the HoReCa field the possibility to access non-reimbursable financing of up to 100,000 euro for the installation of photovoltaic panel systems and charging stations.

“We are talking about 477 million lei of budget credits already allocated for this program”, said Dancă. “Systems with an installed capacity of between 27 kW and 100 kW will be financed, and they do not require additional ANRE authorization. The value of the financing is between 30,000 euro and 100,000 euro and our goal is to allocate up to 200 million euro for this type of investments. It is not co-financed by the beneficiaries. It is a 100% non-reimbursable grant of up to 100,000 euro,” Dancă explained.

Large-scale electrification can help us achieve the target of reducing greenhouse gas emissions by 60% by 2050 in the European Union, given that fossil fuels are the biggest contributors to these emissions, said Mihaela Coroiu, Marketing Strategy Director at EnergoBit.

A company operating in the market since 1990, EnergoBit has an annual turnover of over 65 million euros and about 700 employees, of which over 250 are engineers. The company has been involved in projects of renewable energy since 2008 and is able to offer a full range of services, according to the principle “one supplier for all phases of the project”: design, technical consulting, production of electrical equipment, monitoring solutions and control, turnkey works (photovoltaic, micro hydropower, wind and cogeneration based on biogas and natural gas).

During the pandemic, EnergoBit experienced no slowdown in how the renewable energy investments are treated. “The projects committed for execution, generally small projects under 1 MW, have continued and been executed, and the larger projects, those with over 100 MW installed capacity, are in the design phase”, said Mihaela Coroiu. “Large investors are taking these projects seriously starting with 2021, given that policies, regulations and the legislative framework will be aligned to meet the assumed targets,” said Mihaela Coroiu.

“The electricity transmission and distribution infrastructure is essential and without this infrastructure we will not be able to benefit from the real advantages of renewable energies”, Mihaela Coroiu also underlined.

Wiren is involved in the installation of 100 MW solar parks in Spain, and last year their installations exceeded 200 MW. In Romania, Wiren is focusing on prosuming projects, the only ones that still support the market at the moment, said Dor Marian, CEO Wiren.

“We cover all the customers in the area of solar energy, from residential customers – prosumers – to large customers, investors in large projects. We also deal with the development of projects of over hundreds of MW in installed capacity. We have a construction division for photovoltaics parks, being involved, at the moment only in Europe – we have projects in Spain, over 100 MW, and we closed last year with built projects and installations totaling over 200 MW. We have access to technologies from the largest manufacturers around the world. We decided to focus especially on the Romanian market, in the area of prosumers, but we also target the big producers. At the moment, there are no big investment projects in photovoltaics – they will start in the period 2021-2022, as soon as the legislative framework will allow it”, he said.

In Romania there are over 8 million places of consumption for electricity, of which 4 million are households, and the development potential of the market is huge. “If we consider that 10-25% of homeowners can install photovoltaic projects, we are talking about many gigawatts in projects between 3 and 5 kW,” he added.

Photomate, a company based in the Czech Republic, has been an authorized partner for the distribution of Huawei solar inverters since 2011, with extensive experience in technical aspects, sales and service assistance, said Adrian Paraschiv, Photomate Country Manager.

Photomate entered the Romanian market this year by opening its first office in Bucharest and it is a Regional Value Added Partner (VAP) for Huawei solar inverters in Central Europe, Eastern and Nordic countries, as well as a Certified Service Partner (CSP), said Paraschiv.

“PVs is an area where consumers’ interest in clean energy and cogeneration has become increasingly visible – and this is also visible in customer requests, but also in discussions in the European Union. Our core customers are the installers of these systems, and we offer solutions and equipment for them to be able to integrate photovoltaic parks or installations from the residential segment to large-scale production. We delivered 967 MW in Ukraine, 168 MW in Poland and 116 MW in Hungary in 2019. We support our customers both in the pre-sale and post-sale period, with an increased focus on training, but also through support and personal contact”, he added.

Over 5,000 MW in new renewable capacities

Romania could install more than 5,000 MW in new renewable capacities in the coming years, said Sebastian Enache, Business Development Manager and member of the board at Monsson.

Romania has become a mature market, and the companies, products and services we now find on the Romanian market are largely local, he stressed. “There are many solar panel factories, for example, in Romania and we are also exporters of know-how for emerging markets. In the past, Romania used to send experts to be trained outside the country, while now there are experts from the region who come to training here. This proves that not only this is the direction given by the Green Deal, but also the fact that Romania has a mature market. The energy mix shows that at times we exceed 25% of production through renewables, and the share of prosumers increases, including through the AFM program, which goes on, more or less. Add the Electric Up program to this! People are starting to talk, to get acquainted with the field, not only in large companies, but also among the household consumers”, said Enache. “In addition, offshore wind is starting to be very interesting in Romania, as already large Romanian companies, state or private, have shown their intention to invest in this field.”

“There is certainly a pipeline of projects to be developed of at least 5,000 MW for the coming years. There is an appetite, there are investors, there is money and there is a need for the next 5-6 years”.

Adrian Borotea, RWEA: There is potential for growth in the renewables market

We have a revised energy strategy, which emphasizes wind and solar energy. The targets for 2030 assumed by NECP are not only easy to achieve, but also easy to exceed, and we believe that these targets can be even more ambitious, said Adrian Borotea, vice president of RWEA.

“There is potential, there are specialists and desire from investors. And this can be seen in the price of energy: the more wind and solar energy is injected into the system, the lower the price of energy generated, respectively the price for the final consumer”, said Borotea.

“Analyzing the first half of this year, we find that wind energy production was higher than coal, and this can only make us happy, as the price of energy decreases both by direct impact and by avoiding the costs of CO2 certificates. We also have good news from Brussels, as there are significant volumes of European funds that will come not only to support wind or solar energy, but also to improve transmission and distribution networks capacity to takeover new renewable power generation.

We had the opportunity last week to discuss the first measures in the National Resilience and Recovery Plan, which, in a first stage, refers only to the possibilities of public authorities to access such funds; after a first discussion, we understood that in in the next period, these funds will also be addressed to companies, with a normal allocation to renewable energy and especially wind energy. We also discussed the issue of offshore capabilities – this draft law that deals with the development of new capabilities. We want, within RWEA, to continue and strengthen this idea and to promote, together with the interested parties, this sector as well”, Borotea added.

The RWEA association is in contact with several similar associations from neighboring countries, but also from countries such as France and Poland, in connection with the Renewable Resources Academy project. “It is a successful idea that we are trying to complete with European funds, so that very soon the miners and all those who want to become specialists in wind energy and electricity distribution can participate in trainings so that they could find interesting jobs, both at home and abroad. We believe this is a good idea, which deserves to be carried out, and, with the support of the authorities and European funds, we will do it”, Borotea added.

The conference “Clean Energy Solutions for End Consumers” was organized by Energynomics with the support of our partners EnergoBit, Photomate and Wiren Energy. 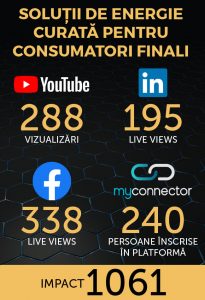