In June, the Integrated National Energy and Climate Change Plan project 2021-2030 (PNIESC) has received recommendations from the European Commission. The proposed adjustments correct the lack of ambition and essence of the document proposed by Romania. 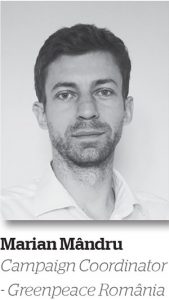 The reaction of the European Commission is normal. Romania has entered in an European club that offers many advantages, but which also entails observing certain conditions and undertaking certain contributions. PNIESC is a projection of the measures that are to be taken by Romania in the energy field throughout the following decade, considering the current climate context. Practically, Romania can’t only be preoccupied by safely covering its internal energy needs, but it also needs to take a fair part, side by side with other member states, in the effort of limiting the increase of the global temperature and reaching, in the horizon of year 2050, an Europe without emissions.

Does the Romanian state want to fight against climate change?

No. „The energy transition” – without which we could not really be preoccupied by the climate – is only barely mentioned in the speeches of high-ranked officials. Unfortunately, the PNIESC project clearly highlights the derailed priorities of decision markers, mostly inspired by the fantastical draft of the national energy strategy.

The fact that we still lack a plan for eliminating coal (and other fossil fuels) is very alarming. More than half of the EU member states announced that until 2030 at the latest they will give up coal-powered energy. Officials avoid this subject, especially due to political reasons, eroding the chances of a just, gradual transition, in the areas where coal is exploited and used. Those who will suffer will be the locals, deceived with promises, instead of being offered alternatives for development, which are not only possible, but which can also be funded through European money.

Furthermore, the evolution of renewable energy has been stopped, the target proposed by Romania for year 2030 being of only 27,9%, only a few percentages above what we are currently at. The reaction of the European Commission is not surprising at all, penalising this „negotiation” attempt, and requiring a minimum target of 34% and a framework favourable for prosumers, according to the new European Directive on Renewables.

Romania needs to see this process as an opportunity and build a bold plan that looks beyond 2030, with clear decarbonisation goals. The time for negotiations has passed, the time of commitments has came.

P.S. The interesting part is that Greenpeace Romania has asked the Ministry of Energy the consultation calendar for PNIESC, information regarding the organization of work groups and the methods used for informing the general public. Even though there are only a few months left until the deadline for submitting the plan, we were recommended to check the ministry’s website periodically…

This article firstly appeared in the printed edition of energynomics.ro Magazine, issued in September 2019.

In order to receive the printed or electronic this issue of energynomics.ro Magazine, we encourage you to write us at office [at]energynomics.ro to include you in our distribution list. All previous editions are available HERE.