Home»Renewables»Newly installed solar capacity increased in EU by 36% in 2018, up to 8 GW

President of SolarPower Europe Christian Westermeier said that “the state of solar has dramatically improved in the European Union, illustrated by the EU-28 solar market growing at a much higher pace than the global market”. Two were the major drivers identified: the EU has removed the trade measures on solar panels and it has provided the right framework for solar to thrive through the Clean Energy Package legislation. “Now it’s time to take European solar to the next level by putting in place an industrial competitiveness strategy that will unlock massive investments in the solar sector, create high-tech jobs and provide the most cost-competitive clean power to meet the EU’s energy and climate targets”, said Christian Westermeier. 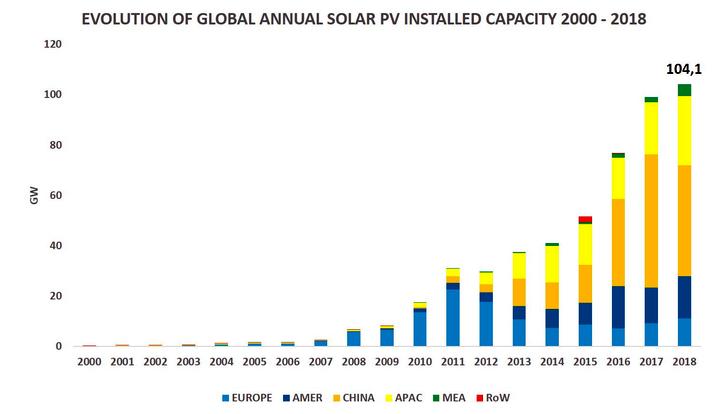 SolarPower Europe’s first market estimates show Germany regaining the number one solar spot in Europe after five years, adding nearly 3 GW in 2018, growing around 68% year-on-year. The second largest European market was the previous market leader Turkey, adding approximately 1.6 GW, with the Netherlands coming in for the first time as a top 3 solar market, adding 1.4 GW in 2018. France ranked just behind after adding 0.9 GW year-on-year, ahead of Italy with 0.5 GW.

On a global level, China remained the world’s leading market with 44.1 GW and a share of 42 %. While that is a 16 % decline compared to its record year in 2017, it is much higher than market experts had anticipated after China’s administration announced a reform of its solar subsidy program in May 2018. The top 3 global markets in 2018 alongside China were the US (11.4 GW) and India (8.3 GW).

For the next 5 years, Spain will be the largest solar market in Europe, based mostly on PPAs, showed Jose Donoso, general director of UNEF – Union Espanola Fotovoltaica, the Spanish national association of solar industry.