Home»Interviews»Victor Grigorescu, minister of Energy: Our mission is to maintain Romania’s energy balance and security

With a little while before the expiry of the one year mandate of the leading team at the Ministry of Energy, we are at the moment when we can draw a line under the last year. It is what each of those involved in the energy industry does, in one way or another, more organized or simply sketched. In comments launched on social media, in articles published online, in position papers or just comments in private discussions, the ups and downs in the ministry’s performance describe more than this; they speak, in fact, about the state of the energy industry today. We had the chance to get a perspective from minister Victor Grigorescu, an interesting one not only by the selection of the achievements, but also because of its consistent balance-dominated approach.

Mr. Victor Grigorescu, what are the main achievements of your mandate? 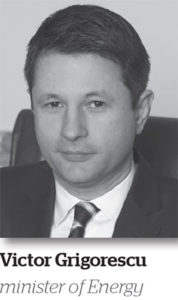 I am not a big proponent of counting successes, because of the risk to simplify a reality that is much more complex. Energy is par excellence one of those areas where you can have great achievements in some individual cases and, however, overall, to be in a disaster.

We still have a public administration that rarely succeeds in functioning as a system. We have real difficulties in taking over and capitalizing on what we have received from the past, and then passing on everything a littler better than we found it. This is the most important fact that a holder of a public office must undertake. Before boasting any specific achievements, we must look at the effects with a medium- and long-term vision.

From this perspective, in the year I led the Ministry of Energy I think we managed to change this damaging way of doing things. We completed the Energy Strategy of Romania, a initiative which started two years ago and which was just a little more than an intention. We managed to stop the degradation of the economic indicators of major companies, especially ELCEN Bucharest, Hunedoara Energy Complex, Oltenia Energy Complex, even though, sometimes, the measures we had to take were extremely difficult and less popular. There is still a lot of work to be done, especially in the coming year, for strengthening the reform process we started.

We unlocked the recruitment processes for management in state-owned companies and we improved implementation of corporate governance principles. We have adopted a number of essential laws for the energy sector, particularly in the natural gas sector, aiming to create a real and transparent market in Romania. We made the ministry’s activity more transparent than ever before. We managed to start a reform process that changes the paradigm of the system gradually, but surely.

I know that there may have been expectations for more drastic, even revolutionary, actions, but I ask everybody to understand that blasting the system would have not bring anything good. We would have beeen rendered in a non-functional state of things and we would have been forced to run after suboptimal solutions. We chose to change things gradually, so that each success to motivate the entire sector.

Romanian energy industry benefits from a large number of specialists and these people should be involved permanently and they should believe in the projects we propose. They are those who give the force behind reforming the system, not a single person. I do not believe in a messianic approach. This is why the draft of the Energy Strategy of Romania went through so many stages of consultation and debate.

As expected, the skeptical and critical voices have accompanied you this year. In this context, to what extent do you think you managed to obtain even the beginning of a consensus in the energy sector?

Far from me to claim that we are all aligned on one tune. There are many voices that support other directions than those proposed by me. Some believe that we are moving too slowly, while others believe that 20 or 30 years ago it was better. I have answers for each different view and I think I have done my duty to answer to most of -, if not to all who have asked, charged or questioned. Firstly, Ministry of Energy provides the energy security of the country, starting from a balanced energy mix, and from the necessity that Romania should rely primarily on its own resources. If that means adopting measures to keep coal in the energy mix (opening new coal quarries), this is what we do, even though not everybody likes this. The same goes with opening the gas market by imposing a minimum mandatory share of transactions on the commodity exchanges, in order to create a fair and transparent benchmark price for gas in Romania. Some say it is better to maintain bilateral contracts, – although they are not transparent -, and a market moved by two or three players. This is not possible. I understand that recognizing the importance of nuclear energy makes those who promote other energy sources, including natural gas, to look at us with discontent. But as I said, our mission is, above all, to maintain Romania’s energy balance and security.

What are the hottest dossiers that remain for the future minister of Energy?

The pace of development of the energy industry and our geo-strategic context make this a very hot sector for the next decades. For the Ministry of Energy there will never be times of peace.

The Energy Strategy shows us that we have huge challenges ahead, especially regarding the replacement of a third of current generating capacity. We need investment of at least 7 billion Euro.

Then, there is the coal mining situation. We managed to put the things on the right path, but if not carefully supervised, negative developments can appear extremely fast. We will need to make sure that we retain the full nuclear cycle and, even if we managed to take social measures imposed in this area, it is imperative to continue the restructuring plans and the opening of new mining perimeters.

The district heating is a problem of critical level. We managed to stop the decline in ELCEN. This subsector alone is responsable for an about 6 billion lei loss, while many cities are in critical situation. Here we need a financial rigor that we have not practiced for 25 years and, also, significant investment in order to ensure the system remains functional on medium term. And another very important point: I think the Ministry of Energy, with those who will lead it, and with every public officer or employee, must understand our place in the European infrastructure for a properly management of the situation, so as to benefit from the advantages we have because of our geographical position, as well because of our technical and human capacities. Whoever will come to lead this ministry must understand that it is a very difficult period, full of opportunities and challenges.

What it is that you desire for this sector to happen next?

I have a very long list of desires. But I would like to insist on an extremely important one. Among the mistakes they have made in recent decades is ignoring human capacity that stood behind this building system. We are one of the privileged countries in Europe in terms of energy mix and in terms of our ability to produce more energy than we consume, but we ignored the people, the energy specialists who have made all these achievements possible. Focusing on research and development is of a crucial importance in the energy sector. Ministry of Energy should have a distinct line of action in this area. We still do have specialists of international level, but time and lack of interest in this direction will make us lose this vital resource if we do not take action right now.

What do you think will be maintained from the way of working that you introduced in the ministry?

I think every minister must build his own team to help him to implement the vision he has for his mandate. But I hope that the philosophy behind my mandate to become a working tool because it is not one built on personal considerations, but on an intensive scanning of the system status. In short, I believe that the ministry’s work has in the center the principle of energy security and the actions arising from this principle. The manner of implementation depends on a personal choice, but it must be consistent with the needs of the energy system. I choose to be optimistic, because energy sector has numerous mechanisms to make it manageable even in difficult situations.

What are your plans for the future? Are you interested to remain in the energy sector or entering politics?

We are on the home stretch and I believe that your magazine will still be on the market after the formation of the future government, so it is premature to make my future plans. I will work with the same devotion until the last day and only after that day, I will have the freedom to make my plans  for the future. I think when you choose and you are chosen for such an important position, the only focus is to make your job better, until the end. Any other plan that I would work on today, it would certainly affect the performance that I expect from me. I am not worried for what follows. And I think none of us should be for as long as we work with devotion, I am convinced that we will have the deserved rewards.

How do you want the people to remember you after this year of ministry?

As someone devoted to the proper functioning of the energy system. I did not compromise, and I dedicated my whole time in the ministry for maintaining the necessary balance in order to keep the energy system in function. If this was noticed, then I can only rejoice.

How do you worry that you might remain in the memory of the energy community?

I have no fear related to this issue. Coming back to where we began this interview, I think that the energy system should not be managed with excessive personalization, but with moderation and balance. Being a minister is something temporary and it is subject of permanent criticism. Whoever thinks about it as a reason of pride and thinks about posterity will only waste of time and lose his focus.

The full version of this article can be read in printed edition of energynomics.ro Magazine, issued in December 2016.

In order to receive the next issue (March 2017) of energynomics.ro Magazine, we encourage you to write us at office [at]energynomics.ro to include you in our distribution list.