Many believe that new companies and technologies have brought geothermal to the point that it may finally be ready to scale up and become a major player in clean energy. With the technology for accessing deep geothermal developing at faster and faster pace these years, we talked with a geoscientist with over 34 years of experience about this old promise of geothermal energy. For many decades, Stephen Birrell worked in the O&G industry and he is quite familiar with the Romanian underground after 15 years of activity here. However, he pointed out that geothermal has the potential to bring together economic sectors as diverse as energy, industry, agriculture, tourism, health and leisure. 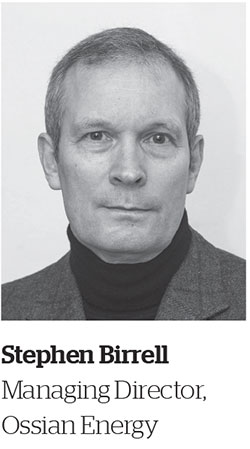 Mr. Stephen Birrell, tell us a few words about what geothermal energy is and what is the promise it carries from the energy industry perspective?

Geothermal energy is the heat emitted from the core of the planet, typically it is transferred to ground water, which in exceptional area flows naturally to the surface. Or it can be drilled into and extracted through a wellbore. For example, the popular Terme attraction, outside of București, is made possible thanks to the hot waters beneath it, others are Băile Felix and 1 Mai in Western Romania. These are examples of the direct use of geothermal energy for “wellness”. Other examples include using low temperature geothermal for heating greenhouses (Direct) or high temperature geothermal for power generation.

Geothermal is a reliable and relatively inexhaustible form of renewable energy with practically zero emissions of CO2 compared to energy from coal, oil or gas. It is highly efficient and uses 25 to 50% less electricity than conventional pumped heat systems.

There is the potential for an integrated set of solutions linked with geothermal exploitation, among them to re-purpose the skills from the oil and gas industry for drilling and reservoir identification. In addition there is the potential to re-use existing oil and gas well stock, creating significant savings from well abandonment and reducing the costs of geothermal exploitation. There is the potential for industrial and agricultural sectors to work side by side, for example, in developments of agricultural greenhouses, whereby heat is provided with geothermal and CO2 from industrial plants or gas powered electrical generation can be sequestered in the greenhouses.

It seems just natural for geothermal energy to borrow people and technology from the oil and gas industry. What it is, more precisely, that O&G has to offer?

While naturally surface flowing geothermal waters are exceptional, most geothermal heat is exploited through drilling wells. In the oil and gas industry we are very competent at drilling wells safely and within a budget. Exploitation of geothermal energy requires a good understanding of the rock layers beneath the surface, let’s call them reservoirs, but in the case of geothermal they are full of flowing hot water instead of oil or gas. From this perspective, much of what we know and apply in oil and gas can be used in geothermal. The third aspect which can benefit from the oil and gas industry relates to existing wells. Drilling a well is one of the highest costs for geothermal, so being able to use an old oil and gas well reduces the cost and for some oil and gas companies might save them millions of euros, otherwise spent on well abandonment.

How difficult / easy it is to move from hydrocarbons E&P to harnessing geothermal energy? Do you see it as a possible new line of business for the O&G companies, or more likely as new developments run by different companies, with different approaches?

Moves by traditional oil and gas companies have already started with some companies realizing that they are actually in the “energy” business. For example BP, Shell and Equinor are moving towards wind and solar, while BP have invested in geothermal outside of Europe. OMV Petrom have installed solar panels to provide power to some of their facilities, while in Austria, OMV are involved in geothermal projects. So I would frame this as the extension of an existing line of business – this is what smart business do. We have also seen the rise of new companies in this sector and that will continue until the point of consolidation, as happens with any industry.

What do we know about geothermal energy potential in Romania? Are the O&G ordered studies of any help in this respect?

The EU supports geothermal as part of the “Green Deal” and a study undertaken for the EU commission suggests that Europe has the 4th largest capacity for geothermal energy in the world. In 2016, around 3% of primary energy in Europe was from geothermal. While power generation is mostly located in Italy, Germany, Portugal, Iceland and Turkey, however geothermal heating is used in 32 countries across Europe.

Historically, geothermal drilling began in Romania in the 1960’s and around 250 wells have been drilled since then. While there are around 80 wells currently in use, I am aware of only the Oradea binary power plant generating electricity at around a capacity of 50 kW.

A company called Drilling Risk Services, recently undertook a study of existing oil wells with potential to convert these into geothermal candidates and this show potential. The report suggests the depth of the wells is between 2,700-5,000 meters and water temperatures (at wellhead) are around 160 degrees Celsius. The hot water productive zones are placed around Mesozoic and Jurassic oil productive formations. The current processed information estimate a production with a flow around 40 liters/second and potential commercial life time of over 50 years. The company plans to offer a service to promote and support geothermal exploration and drilling. The University of Oradea’s Department of Power Engineering appear to be one of the leading Romanian experts on the subject of geothermal and have been closely involved with the projects in the city of Oradea.

What is the scale that geothermal energy might prove to be a solution at and what are the most likely candidate beneficiaries?

IRENA (International Renewable Energy Agency) published a report, in 2017, that looked at the potential for cost competitive renewable power generation in South East Europe. In the report it was stated “the geothermal energy potential of the region is primarily characterized by a relatively low-enthalpy resource base, which is more appropriate for non-power applications. Binary plants that allow cooler geothermal reservoirs to be used for electricity generation are the only feasible option, which offer a potential of up to 690 megawatts (MW) at an average LCOE of EUR 86/MWh (EUR 0.086/ kWh) in the medium cost of capital scenario”. To put this in context, 1 MW of capacity can supply over 650 average size homes. At that cost this makes it more expensive than onshore wind, solar, gas but less expensive than nuclear, offshore wind, coal and peak natural gas. This renewable could be deployed mainly in Romania and, to a lesser extent, in Bulgaria, Croatia and Slovenia.

However, beyond power generation there is much more potential developing heating schemes such as district heating or large scale greenhouse heating. The development of greenhouse heating with low energy geothermal provides the opportunity for direct sequestration of CO2. But this will require collaborations and feasibility work to establish where and how this might be best developed.

This interview firstly appeared in the printed edition of Energynomics Magazine, issued in December 2020.

In order to receive the printed or electronic this issue of Energynomics Magazine, we encourage you to write us at office [at]energynomics.ro to include you in our distribution list. All previous editions are available HERE.